Add an Event
Newswire
Calendar
Features
Home
Donate
From the Open-Publishing Calendar
From the Open-Publishing Newswire
Indybay Feature
Publish to Newswire
Add an Event
Related Categories: California | Central Valley | Environment & Forest Defense | Government & Elections
Tunnel Opponents: BDCP Is On Life Support
by Dan Bacher
Friday Aug 29th, 2014 5:15 PM
“BDCP’s friends and family anxiously expressed hope that an infusion of additional millions of dollars and months of treatment would enable the project to recover,” quipped Bill Jennings, CSPA Executive Director. “However, the EPA comments coming on top of some 4,500 pages of searing reviews by municipalities, counties and water agencies that would be adversely impacted by the project, almost 2,000 pages of highly critical comments by environmental and fishing organizations, hundreds of pages of harsh analyses by government agencies and stinging comments from many thousands of California citizens reveal that BDCP is suffering from a congenital terminal illness." 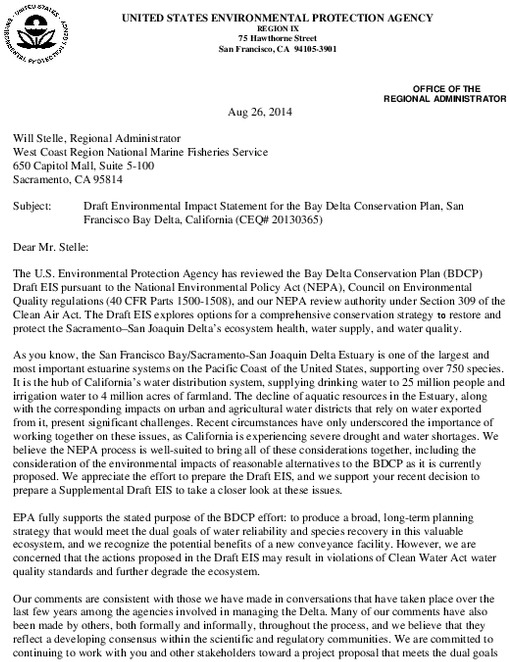 The California Sportfishing Protection Alliance (CSPA) said the controversial Bay Delta Conservation Plan (BDCP) to construct two 35-mile long tunnels under the Sacramento-San Joaquin Delta to divert Sacramento River water to “agricultural plantations” in the deserts of southern California “was placed on life support” when the California Department of Water Resources announced that a revised EIR/EIS would be delayed until sometime in 2015.

“BDCP’s friends and family anxiously expressed hope that an infusion of additional millions of dollars and months of treatment would enable the project to recover,” quipped Bill Jennings, CSPA Executive Director.

“However, the EPA comments coming on top of some 4,500 pages of searing reviews by municipalities, counties and water agencies that would be adversely impacted by the project, almost 2,000 pages of highly critical comments by environmental and fishing organizations, hundreds of pages of harsh analyses by government agencies and stinging comments from many thousands of California citizens reveal that BDCP is suffering from a congenital terminal illness. Additional delay is unlikely to improve BDCP’s prospects for survival,” said Jennings.

Jennings observed, “BDCP was doomed from the beginning because it was conceived on the fatal premise that you can restore an estuary hemorrhaging from a lack of flow by depriving it of another 2.5 million acre-feet of flow.”

“Its two goals are fundamentally inconsistent and spending additional millions to rewrite the EIR/EIS on top the quarter billion dollars already squandered on this project will not improve its life expectancy,” he said. "It's time to pull the plug, put an end to the suffering and get on with addressing California’s real water problems.”

The EPA diagnosis pointed out that operating the proposed conveyance facilities “would contribute to increased and persistent violations of water quality standards in the Delta, set under the Clean Water Act,” and that the tunnels “would not protect beneficial uses for aquatic life, thereby violating the Clean Water Act."

It noted that the EIR/EIS “assumes a 100 percent success rate for habitat restoration, which is not consistent with our experience, or supported by restoration ecology and conservation biology academic literature and scientific investigation” and detailed the likelihood that proposed habitat restoration would exacerbate the production and transport of methylmercury.”

EPA criticized the failure to analyze upstream/downstream impacts and observed that there is broad scientific agreement that “existing freshwater flow conditions in the San Francisco Estuary are insufficient to protect the aquatic ecosystem and multiple fish species, and that both increased freshwater flows and aquatic habitat restoration are needed to restore ecosystem processes in the Bay Delta and protect native and migratory fish populations.”

The agency identified serious inadequacies in the level of analysis, the restoration and adaptive management programs, finance plan, selection of alternatives and found numerous major flaws in the specific effects determinations and impact analyses.
EPA’s comments on the BDCP EIR/EIS and more information about the California Sportfishing Protection Alliance can be found at: http://www.calsport.org.

Restore the Delta (RTD), opponents of the proposed Peripheral Tunnels, applauded the Environmental Protection Agency’s critical review of the Draft BDCP EIR/EIS. The group said the Brown Administration’s delay and redrafting of the governor’s water tunnels plan is a response to the EPA’s criticism of its fatal flaws, does not meet federal standards, and lacks a financing plan.

“The EPA’s criticism of the BDCP shows that it is fatally flawed,” said Barbara Barrigan-Parrilla, executive director of RTD. “The letter by the EPA to National Marine Fisheries Service confirms our findings that the BDCP is a disaster for Delta water quality, communities and fisheries. If the BDCP simply does a rewrite, these issues will not disappear. Rearranging the chairs on the Titanic did not keep it from sinking. A rewrite will not fix the BDCP."

"Delaying the BDCP will not change the fundamental flaws underlying it: it doesn’t pencil out, there is no surplus water for export, and you can’t restore the San Francisco-San Joaquin Delta estuary by draining water from it. The delay shows the power of public engagement. Thousands of pages of comments were turned in, everything from simple statements from citizens to complex analyses by experts," she explained.

“EPA’s objections to the use of the purpose and needs statement for the project (full contract amounts) to limit the range of alternatives may be the most important issue (cover letter, page 2 under Alternatives). EPA’s concerns about impacts to water supply and quality in the Delta are important criticisms," said Barrigan-Parillla.

EPA’s comments are likely the primary reason for the Administration’s decision yesterday to prepare a Supplemental EIR/EIS, according to Barrigan-Parrilla. Since the federal lead agencies agreed to prepare a supplemental EIS to address the flaws EPA found, the rating will not be issued. The rating was going to be EU3, meaning "environmentally unsatisfactory" and seriously lacking in information to address environmental impacts (see p. 3 of linked document above).

The EIR/EIS is "fatally flawed" due to its failure to include a viable funding plan, exclusion of any true no-tunnels alternatives, failure to comply with the Endangered Species Act as evidenced by numerous scientists’ red flags, misrepresenting taking water to be a “conservation” plan, secret BDCP planning with the exporters and their consultants, and lack of public outreach to non-English speakers, added Barrigan-Parrilla.

For more information, go to: http://restorethedelta.org/blog/epa-rejects-flawed-project-financing-plan-water-wont-restore-delta-tens-thousands-comment-tunnels/

Congressman Jerry McNerney (CA-09) also welcomed the announcement by DWR that it will delay implementation of the BDCP until at least early 2015:

“The delay in implementing the BDCP is good news, and I am encouraged that the state realizes the plan is deeply flawed,” said Representative McNerney. “Delta families, farmers, and small businesses have had these concerns for years, and I am glad the state is finally paying attention. We need to work towards a water solution that is fair for the whole state and doesn’t endanger the California Delta. That plan that should include more storage, desalinization, conservation, and efficiency.”