Add an Event
Newswire
Calendar
Features
Home
Donate
From the Open-Publishing Calendar
From the Open-Publishing Newswire
Indybay Feature
Publish to Newswire
Add an Event
Related Categories: Palestine | International | South Bay | U.S. | Anti-War | Immigrant Rights | Police State & Prisons
Motion made in federal court to dismiss charges against Rasmea Odeh
by Rasmea Defense Committee
Thursday Aug 28th, 2014 3:25 PM
Attorneys representing Chicago’s long-time Palestinian community leader, Rasmea Odeh, have filed a motion and brief in Detroit’s U.S. District Court to dismiss the indictment against her. They are doing so on the grounds that the charges are the product of an illegal investigation targeting both Palestine solidarity efforts and organizing in the Palestinian community. 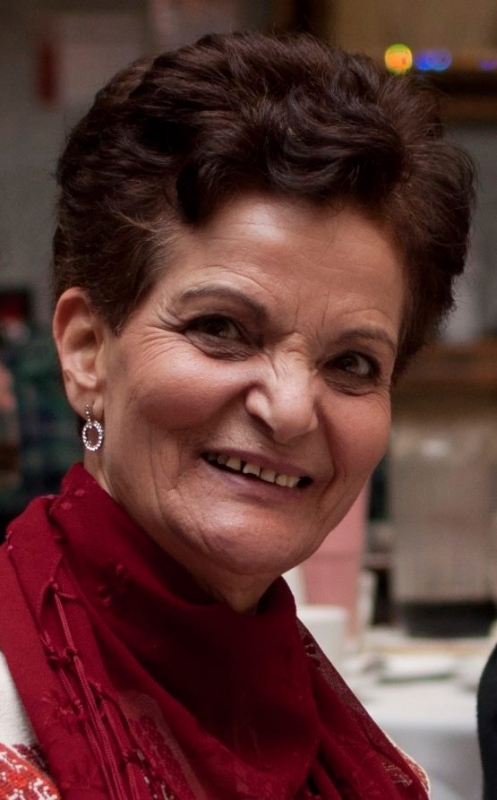 original image (555x893)
“Rasmea is facing up to ten years in jail and deportation. She is a Palestinian who has stood up for the Palestinian, Arab, and Muslim communities of Chicagoland, and to end the occupation of Palestine as well. Rasmea suffered vicious torture and sexual abuse in Israeli prisons, and the U.S. government is trying to victimize her again,” states Hatem Abudayyeh of the national Rasmea Defense Committee.

The motion tells how the FBI and the Justice Department investigated and are attempting to criminalize efforts to empower Chicago’s Palestinian, Arab, and Muslim communities, as well as work to build solidarity with the struggle in Palestine.

In January 2010, Chicago Assistant U.S. Attorney Brandon Fox, as part of his investigation into Palestine and international solidarity activists, initiated a request to the state of Israel - through the Office of International Affairs, Criminal Division, of the U.S. Department of Justice - for their records on Rasmea Odeh.

Later that year, on Sept. 24, 2010, the home of Hatem Abudayyeh, who works with Odeh in the offices of the Arab American Action Network, was raided by the FBI. Also raided by the FBI that day were the homes of six other Midwest anti-war and Palestine solidarity activists. In the following months, Brandon Fox’s name appeared as the contact person on subpoenas delivered to 23 pro-Palestine and anti-war activists, ordering them to appear before a grand jury investigating “material support of terrorism.” No one testified and, due to broad public support and a strong defense campaign, no one was indicted.

In July 2011, the Israelis sent a set of documents to Assistant U.S. Attorney Fox, purportedly supporting the claim that Odeh had been imprisoned by the Israelis. Rasmea Odeh was indicted two years later for alleged errors in filling out her naturalization paperwork.

The defense motion states, “Interestingly, the indictment was obtained by the office of the United States Attorney's office from the Eastern District of Michigan, through a grand jury sitting in the Eastern District of Michigan. The United States Attorney in Illinois, which was the office that initiated the request for the Israeli documents and was carrying out the investigation, apparently passed the case to the office in Michigan, to divert attention from its failed efforts to criminalize…” the work of Palestinian American and solidarity activists in Chicago.

Jess Sundin, of the Committee to Stop FBI Repression, says, “We want Detroit District Judge Gershwin Drain to dismiss the indictment. Rasmea is a great person who has done great things. The charges need to be dropped.”

An important hearing in Rasmea Odeh’s case is scheduled for Sept. 2, in United States District Court for the Eastern District of Michigan, at 231 W Lafayette Boulevard, in Detroit, Michigan. A picket line outside the court building will start at 2 PM EST and the hearing will begin at 3 PM EST. The Rasmea Defense Committee, United States Palestinian Community Network, and the Committee to Stop FBI Repression (CSFR) are mobilizing to fill the courthouse.
§
by Rasmea Defense Committee Thursday Aug 28th, 2014 3:25 PM 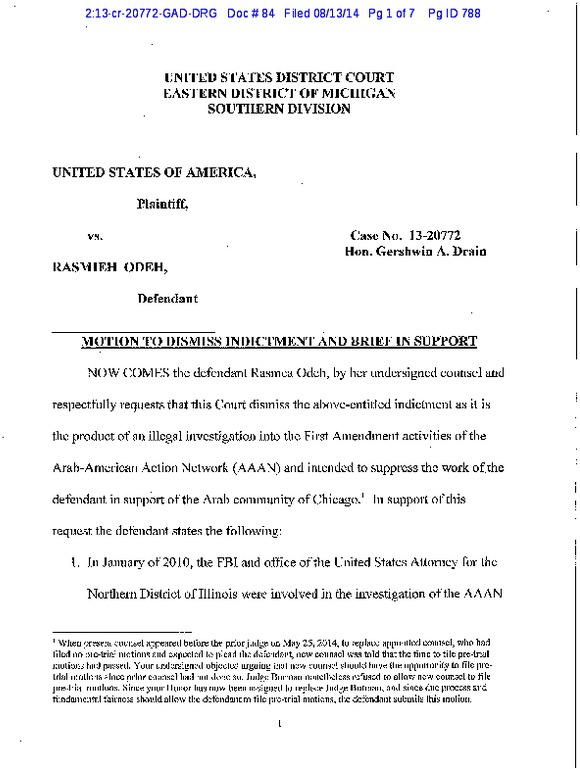 Download PDF (270.4KB)
Add Your Comments
Support Independent Media
We are 100% volunteer and depend on your participation to sustain our efforts!