Add an Event
Newswire
Calendar
Features
Home
Donate
From the Open-Publishing Calendar
From the Open-Publishing Newswire
Indybay Feature
Publish to Newswire
Add an Event
Related Categories: Santa Cruz Indymedia | Police State & Prisons | Racial Justice
Protesters Confront Salinas Police Chief at Bookstore Appearance in Santa Cruz
by Alex Darocy (alex [at] alexdarocy.com)
Thursday Aug 28th, 2014 8:30 AM
To send a strong message that "killer cops" are not welcome in Santa Cruz, community members gathered on August 26 to protest a speaking engagement at Bookshop Santa Cruz featuring Salinas Police Chief Kelly McMillin. "We are creating a public presence to say loud and clear that the Salinas police chief who oversaw the killings of four Latino men in four months is not welcome in our community," read a flyer provided by Sin Barras, the Santa Cruz-based organization that called for the demonstration. [Top photo: A protester displays a sign inside Book Shop Santa Cruz. Scroll down for more photos.] 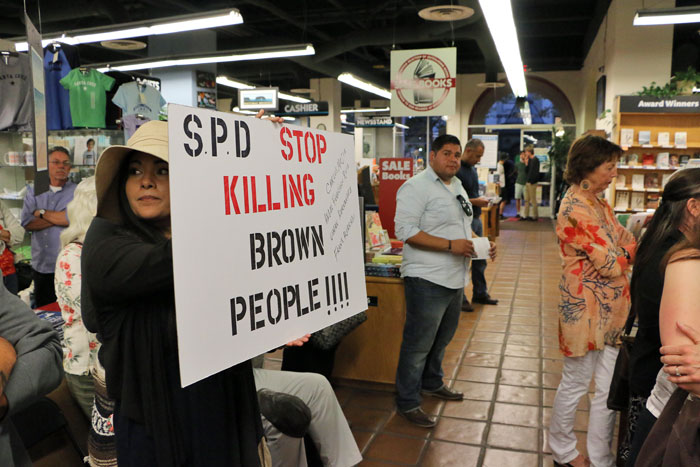 Between March and July of this year, four individuals have been killed by officers with the Salinas Police Department.

Outside of the book shop, which is located in downtown Santa Cruz, one demonstrator held a sign that declared, "Salinas: Our Ferguson."

Several dozen individuals attended the protest, with some traveling from Salinas and other areas in Monterey County to make their voices heard. Organizers say they did not intend to disrupt the speaking event.

Six uniformed Santa Cruz police officers were present at the book shop for security, as was SCPD Deputy Chief Rick Martinez, who personally escorted Chief McMillan in and out of the building and was his driver.

McMillin was invited to speak at Bookshop Santa Cruz by Monterey Herald reporter Julia Reynolds as part of a signing event for her book "Blood in the Fields." According to the shop's website, the book documents the history of Operation Black Widow, "the FBI's questionable decade-long effort to dismantle Nuestra Familia [a criminal organization], along with its compromised informants and the turf wars it created with local law enforcement agencies."

One of those agencies was the Salinas Police Department, and Reynolds made it clear she was a supporter of Chief McMillan's, heaping praise on him for his efforts with regards to youth violence.

Community members seeking justice for those killed by Salinas police this year, however, have had to grapple with the department's lack of transparency and accountability. McMillan has refused to release the names of the officers responsible for the killings.

"We believe it is anti-thetical and extremely disrespectful to give Chief McMillan such a privileged voice in a space that is uncritical of his policies and the racist murders he has overseen," the literature from Sin Barras stated. The group also stated it sought to, "expose the brutality and racism of the Salinas cops and media."

Since its founding, Sin Barras has primarily concerned itself with the intersecting issues of poverty and prison abolition. The Salinas police killings became an intense focus for the group, though, when they learned the fourth person killed this year was Frank Alvarado, who was a Sin Barras member and a dear friend.

Frank was killed on July 10 and since that time very little information about his killing has been released by authorities. They claim he was killed when Salinas Police perceived he was coming at them with a weapon. It was later determined to be a cell phone.

In May, Frank participated in a Sin Barras rally in Santa Cruz. He spoke about his recent release from incarceration, and why he opposed California prison expansion. He spoke passionately about his life and his family. The loss of Frank is still a fresh wound for his friends and fellow activists in Santa Cruz. After his death, Sin Barras immediately contacted his family in Salinas and is in close touch with them.

One member of Sin Barras held a sign at the book shop demonstration that read, "Rebuilding Trust? How about bringing back lives? Frank Alvarado, Carlos Mejia, Angel Ruiz, Osman Hernandez."

Angel Ruiz was killed on March 20 by Salinas police outside of the Wingstop restaurant on Constitution Blvd. Ruiz had reportedly been going through alcohol and mental issues when police killed him after receiving reports he was spotted behaving erratically and in possession of a BB gun.

Carlos Mejia was killed on May 21 outside of a Bakery on Sanborn Rd. Osman Hernandez was killed on May 9 outside of the Mi Pueblo market on Sanborn. In both cases, Salinas police have explained the men were behaving erratically and that they were killed because they felt threatened by the work tools they were carrying at the time of their killing. Mejia was carrying a pair of garden sheers he used for work, and Hernandez was carrying a lettuce knife.

In their literature, Sin Barras presented a set of demands concerning the Salinas police killings. The group demands police release the names of the officers who killed the four men this year, and hold them accountable. They support the families' call to investigate anti-Latino discrimination and violation of federal rights, and they want federal civil rights lawsuits filed.

"Salinas Police Chief Kelly McMillin denies police racism, but how else do you explain that Salinas' population is 75% Latino, but 100% of those murdered by by Salinas Police were Latino?" the Sin Barras literature states.

After four police killings in one year, the perspective vocalized by many is that Kelly McMillin has clearly decreased public safety in Salinas. One sign held by demonstrators read, "Term Limits for Police."

Near the end of the talk, a group of demonstrators holding signs entered the bookshop to display their messages directly in view of McMillan.

As the question and answer period commenced, demonstrators became more vocal as they realized the questions they submitted weren't being asked.

McMillan may have sensed this, and the last question chosen was more critical, comparing the SPD to a criminal gang.

"I do understand the perception that cops are their own gang, that they are the best paid most well equipped gang," he stated. He insisted, however, that the work they do as police is "entirely devoted to being effective at reducing violence."

A Sin Barras member in the audience then shouted out, "effective at killing our friend...[who was] unarmed."

"Our whole goal is to reduce violence and make Salinas a safe place," continued McMillan.

People in the audience started hissing. McMillan then added he thought every police officer in Salinas was deeply troubled by the four killings. People shouted out in response that Salinas police were "murderers" and "terrorists."

After one person in the audience stood up and attempted to ask McMillan one more question, the chief was silent and the person was cut off by the moderator, who concluded the evening.

When the question went unanswered, protesters began a loud chorus of booing and then chanted, "cops, pigs, murderers" repeatedly before leaving the book shop.

In an open letter penned to Sin Barras the day before the protest, and posted to her Facebook page, Reynolds stated that police legitimacy, "can and should be part of the conversation," but that, "it is not all of the conversation."

One individual addressed this issue in remarks made online directly to Reynolds: "You're a tool of state power. Journalists should always be critical of power, or else they are complicit with it's abuses. And providing a forum for the head of a murderous police department to spew out shit is an even worse form of complicity."

"Police are so obviously on the front line of maintaining the poverty and oppression that leads to the violence that you pretend to be concerned about....you are either dangerously naive or willfully supporting their oppression." 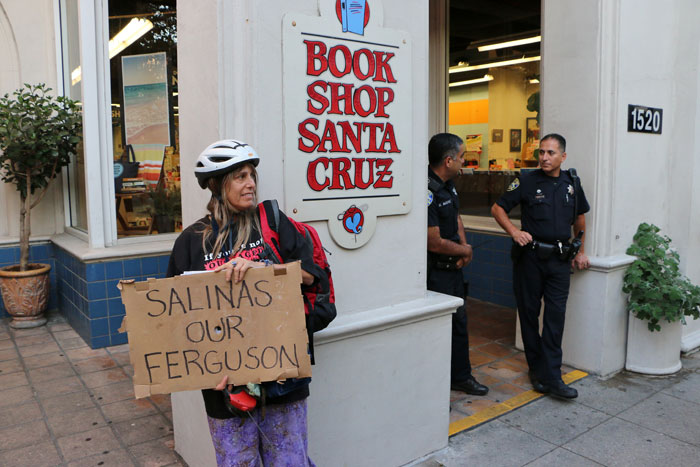 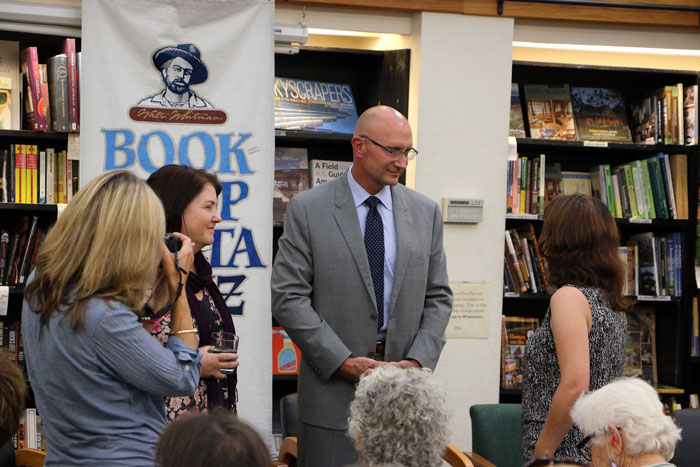 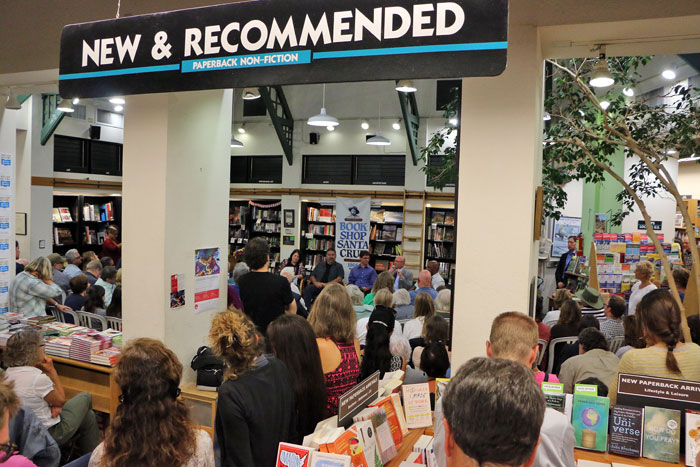 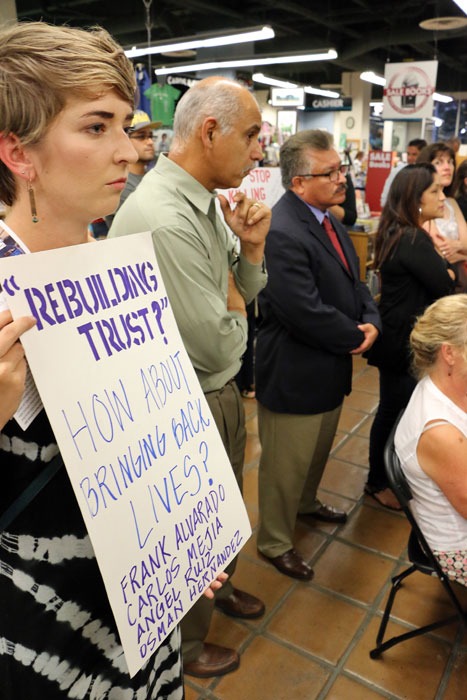 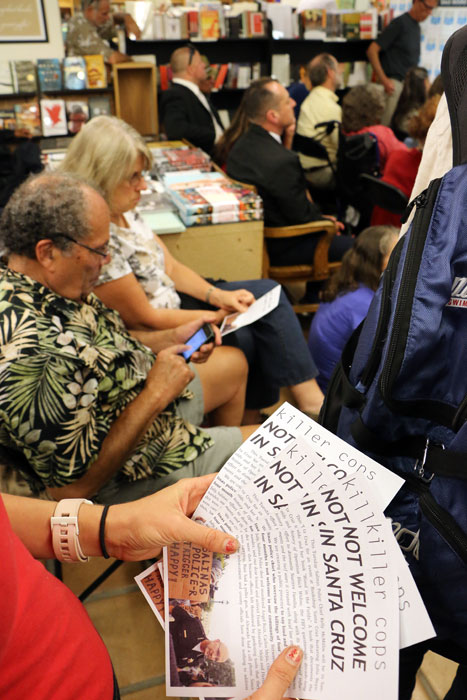 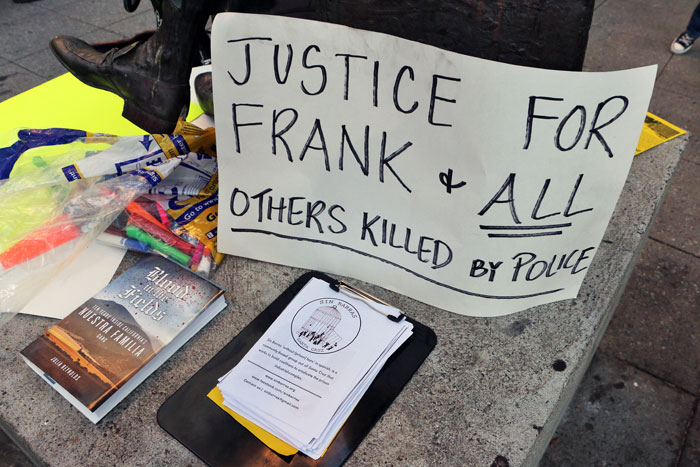 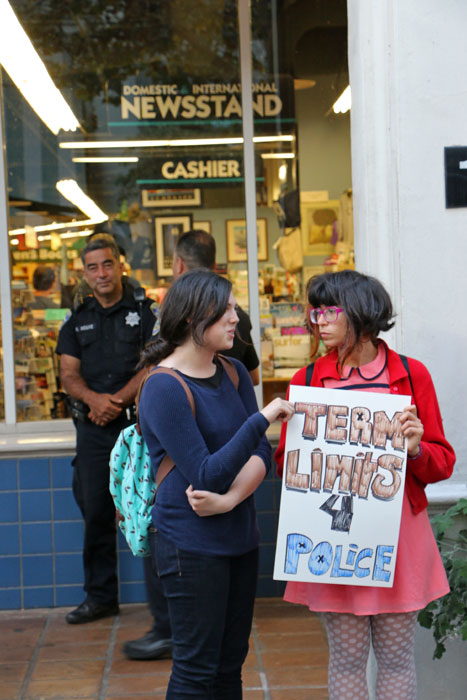 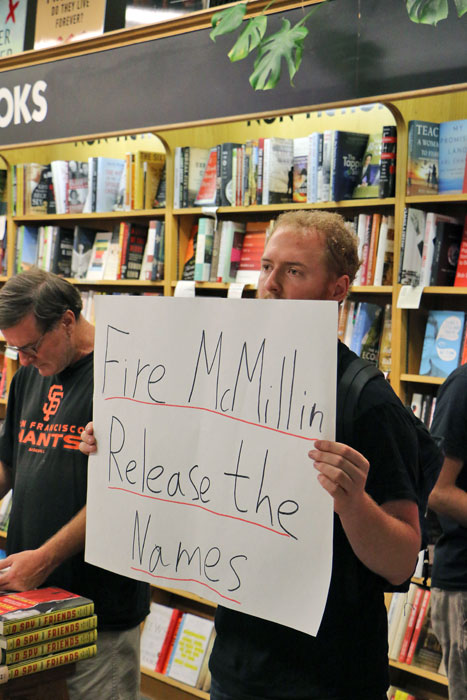 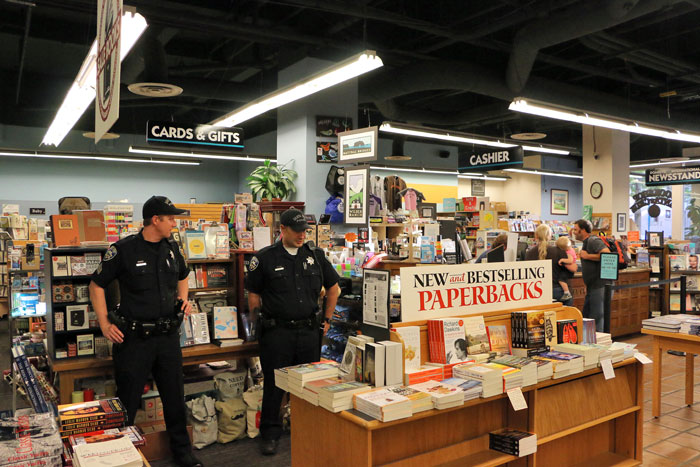 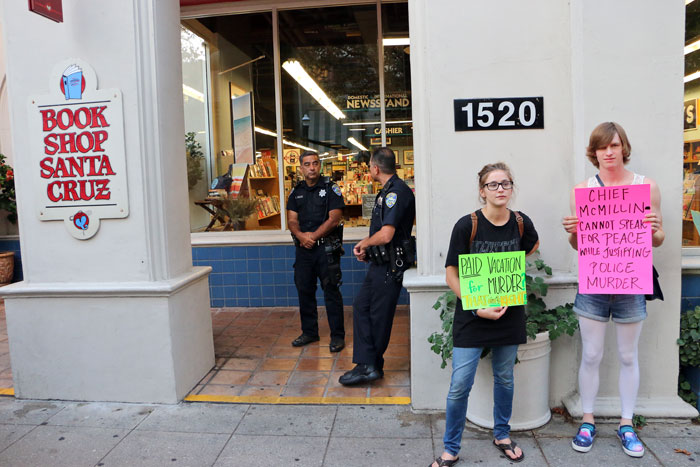 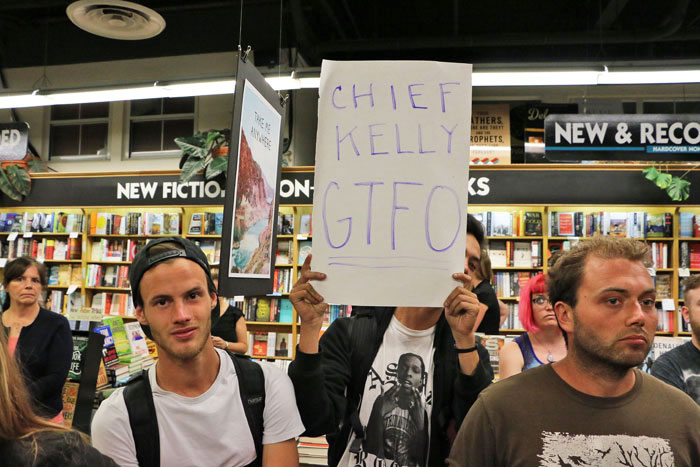 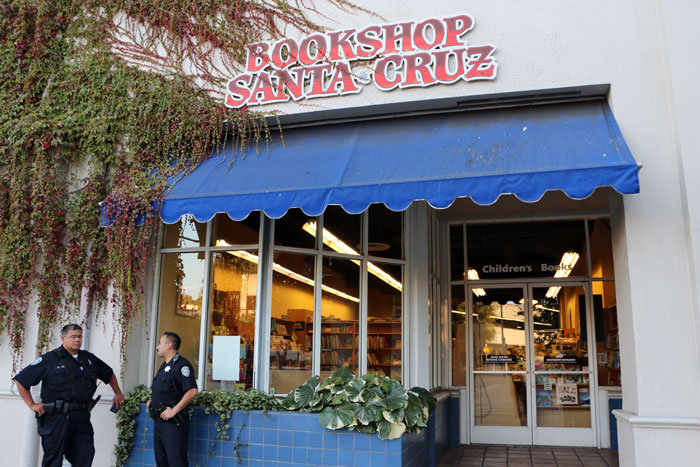 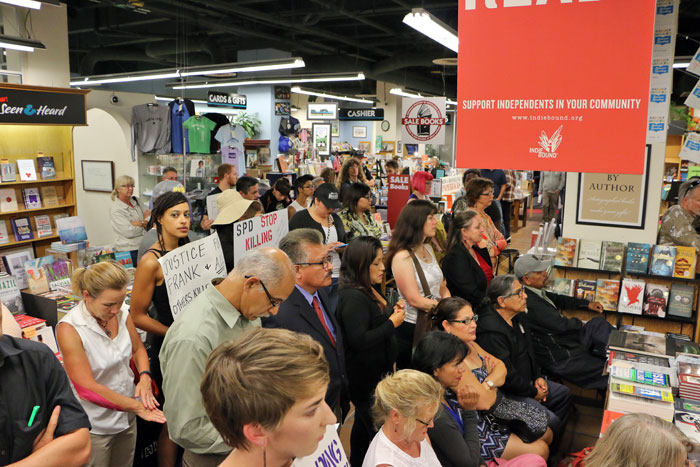 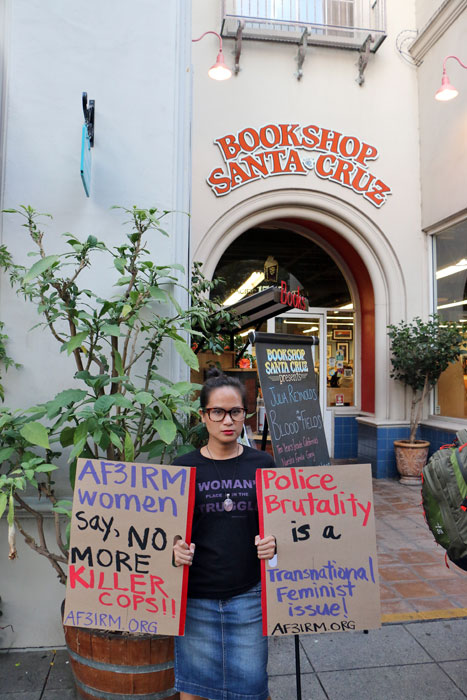 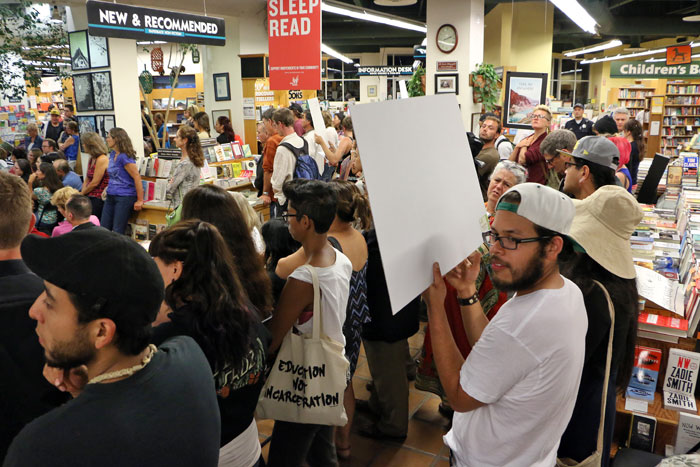 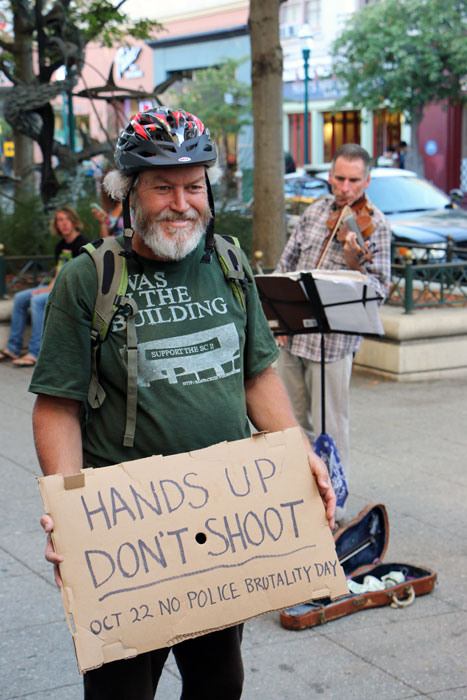 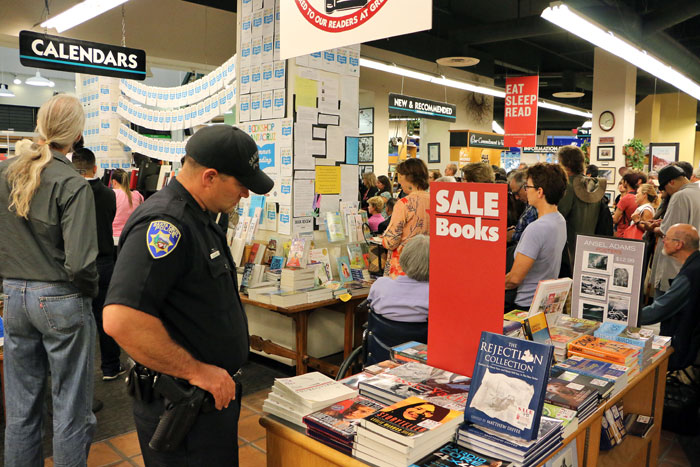 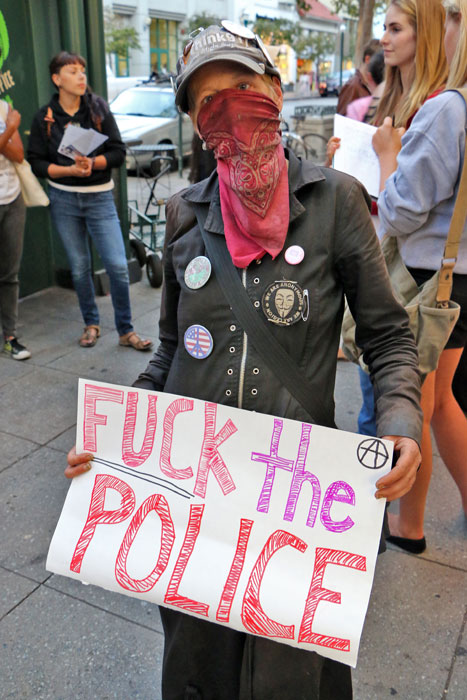 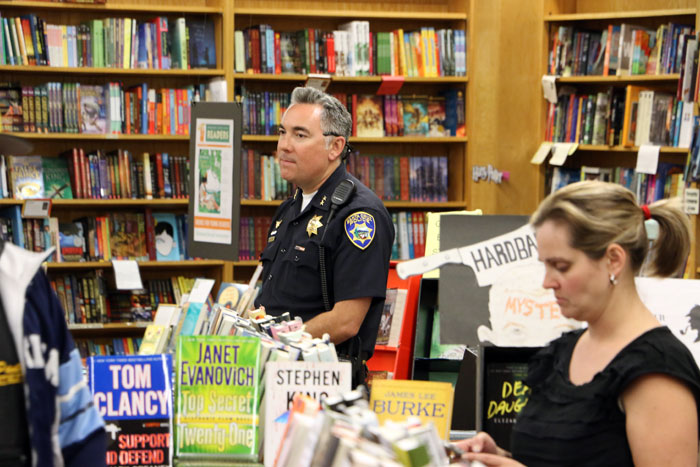 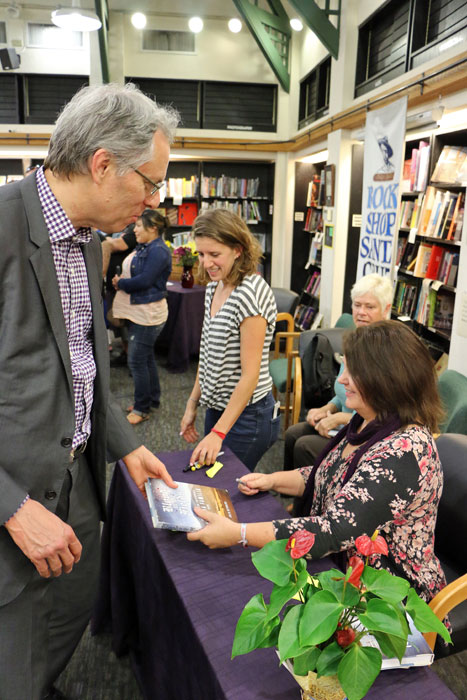 "Spencer is an award-winning producer, writer and composer with experience in digital media, film, broadcasting and the music business. He has directed creative groups or led audio production at BeVocal, Beatnik, Silicon Graphics, Silicon Gaming and CCC/Viacom. Among the projects he has worked on are web content for David Bowie, Moby, Britney Spears and Yahoo!, the redesign of BeVocal's voice applications interfaces, the multiple award-winning Choosing Success CDROM for CCC, the SGI/Time Warner/ATT interactive TV system, and he has also served as a freelance writer/broadcaster for the Canadian Broadcasting Corporation, National Public Radio and others, winning awards for investigative journalism. Spencer has been a composer/producer for Warner-Chappell Music, and was composer and director of audio post production for the Emmy-winning documentary film "Blink". He is the founder of The Desert Mothers, a "virtual rock band."" 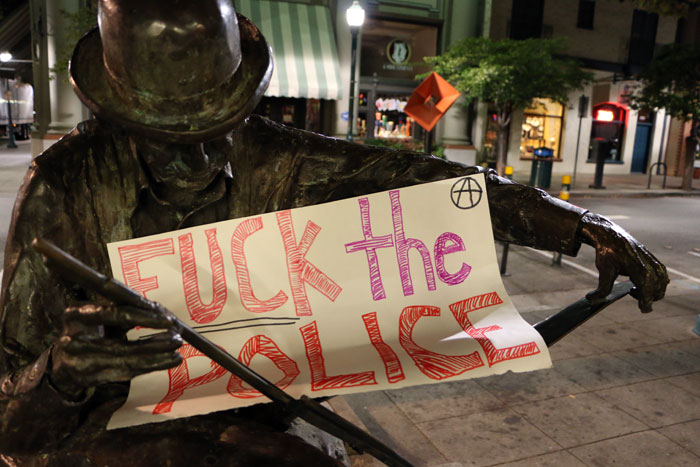 Protesters left the FTP sign on the Tom Scribner statue when they left.
Add Your Comments

§Some Interviews at the Demo on Audio
by Robert Norse
Friday Aug 29th, 2014 12:56 PM
http://radiolibre.org/brb/brb140828.mp3 (last 2/3 of the file). Further interviews and discussion on Sunday 11:30 AM at 101.3 FM, streams at http://audio.str3am.com:5110/listen.pls .
Add a Comment
§I was there . . .
by SC Clerk
Monday Sep 1st, 2014 9:18 PM
. . . too.
Add a Comment
§Cops in Bookstores
by Marcus
Friday Sep 5th, 2014 12:17 PM
Well, I guess one positive aspect is that it forced cops to finally enter into a bookstore, rather than just carry out orders. Their facial expressions belie that they kinda feel like they're on an alien planet. Someone should donate a copy of "People's History of the United States" to them.
Add a Comment
Support Independent Media
We are 100% volunteer and depend on your participation to sustain our efforts!