Add an Event
Newswire
Calendar
Features
Home
Donate
From the Open-Publishing Calendar
From the Open-Publishing Newswire
Indybay Feature
Publish to Newswire
Add an Event
Related Categories: International | South Bay | U.S. | Education & Student Activism | Labor & Workers
The AFT, Education, Common Core, Privatization, GreenDot/Concept Gulen Charters
by Labor Video Project
Friday Aug 8th, 2014 2:34 PM
The national AFT had a booth at the 2013 Netroots convention in San Jose in June. Shaun Richman who is the AFT deputy director of organizing talked about their support for good charters including the "Green Dot" charter which he claimed was a non-profit operation.
Copy the code below to embed this movie into a web page:
Download Video (259.1MB) | Embed Video
The AFT, Education, Common Core, Privatization, GreenDot/Concept Gulen Charters
During the June 2013 conference of Netroots in San Jose, the AFT set up a booth on privatization, high stakes testing and reform in the schools. The AFT is supporting the Common Core but says that it is not being rolled out properly. The issue of re-segregationa of the schools is also discussed along with the the privatization of education through testing by Pearson Inc., K-12 corporation and other companies. The union is seeking to make a "cleavage" of the school reform movement. The issue of organizing in the charter schools is also discussed and what challenges the union faces including union busting by
the largest national charter chain run by Concept Schools which is connected with the Fethullah Gulen movement in Turkey. Gulen is connected to the police including repression of journalists and runs some of the largest newspaper in Turkey along with supporting privatization and theocratic policies in Turkey's schools.
The AFT also differentiated the for profit GreenDot chain of schools with the Gulen schools arguing that they were very different particularly because they allowed unionization of the schools and allowed the teachers to have discussion with the management about curriculum. An AFT representative agreed to provide an audio interview on issues in education.
For more video go to:
http://www.youtube.com/watch?v=-18RVbBsnas
http://www.youtube.com/watch?v=hoO_YmZyOjM&feature=youtu.be
http://www.youtube.com/watch?v=JAeRbh1KVkg&feature=youtu.be
Production of Labor Video Project http://www.laborvideo.org
§Weingarten Pushes Greendot Schools
by Labor Video Project Friday Aug 8th, 2014 2:34 PM 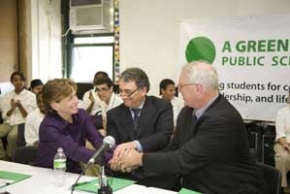 AFT president Randi Weingarten is a big proponent of good charter schools like Greendot.
Add Your Comments
Support Independent Media
We are 100% volunteer and depend on your participation to sustain our efforts!