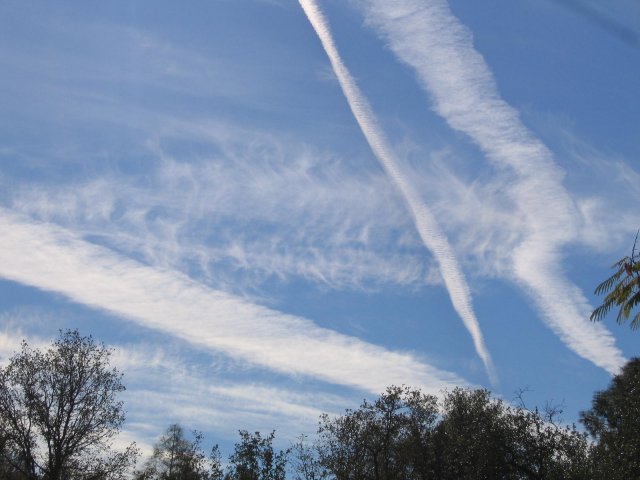 On July 15, the Shasta County Board of Supervisors voted unanimously to investigate alleged connections between the high altitude atmospheric application of chemicals commonly known as "chemtrails" and public health problems.

12 expert witnesses gave testimony which revealed that Shasta County has been contaminated with concentrations of aluminum hundreds of times the concentration of normal background levels. Insects and micro-fauna have been dying off in Shasta County streams and solar radiation has increased steadily for the past several years. Rainfall may also be affected, because the nano sized particles in the upper atmosphere prevent normal rain droplet formation.

The stuff that comes out the rear of a jet engine is already bad enough. It's more than just CO2 and water vapor. The Alliance of Residents Concerning O'Hare Inc. discovered that jet exhaust contains around 75 toxic chemicals including methylbromide, trichloroethane, benzene, acetone, phenol, freon 11 and 12, and formaldehyde to mention a few. Toxic chemicals tend to stick to the carbon soot emitted by the jet engines which settles in higher concentrations around airports.

In solar radiation management ( a form of geo-engineering) either sulfur compounds or heavy metals are added to the jet fuel to cause the engines to emit nano sized particles which are supposed to help block the suns radiation. But what is this form of pollution doing to humans and the ecosystems they depend upon for life? This is the question that the citizens of Shasta County want answered.
Add Your Comments
LATEST COMMENTS ABOUT THIS ARTICLE
Listed below are the latest comments about this post.
These comments are submitted anonymously by website visitors.