Add an Event
Newswire
Calendar
Features
Home
Donate
From the Open-Publishing Calendar
From the Open-Publishing Newswire
Indybay Feature
Publish to Newswire
Add an Event
Related Categories: North Coast | Environment & Forest Defense
Pomo Tribe Seeks Protection for Cultural Sites at Caltrans Construction of Bypass
by Karen Pickett
Monday Jul 14th, 2014 12:35 PM
The Coyote Valley Band of Pomo Indians is requesting government to government consultations regarding ancestral sites in the area where Caltrans is doing highway constuction on the Willits Bypass. Caltrans has already dumped fill on archaeological sites without consultation, as required by law. The Resolution passed unanimously by the Tribe is attached. 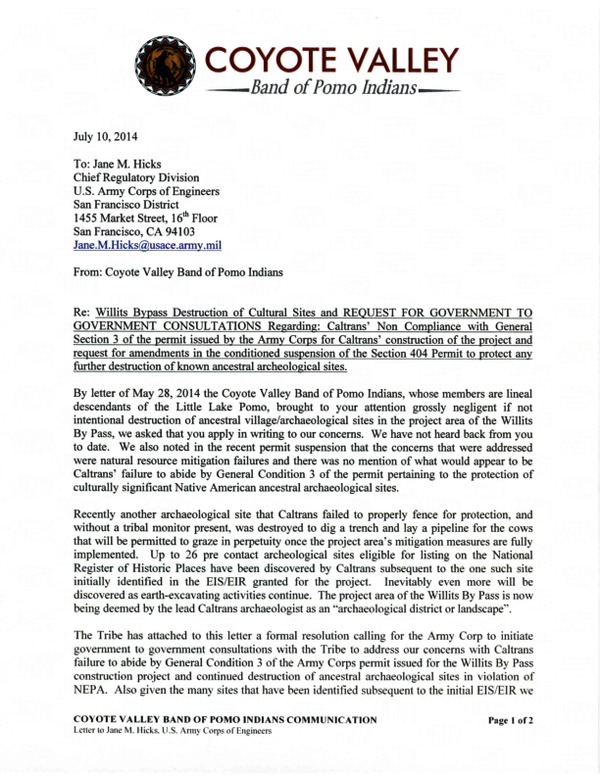 Download PDF (2.2MB)
On July 11, 2014, the Coyote Valley Tribal Council unanimously voted on a Tribal Resolution requesting government to government consultations with the Army Corps of Engineers. They noted in their cover letter that the Tribe had been awaiting a written response to their letter of May 28, 2014 in which they raised concerns regarding Caltrans’ apparent failure to abide by General Condition 3 of the Army Corps permit to Caltrans for the project that deals with the protection of ancestral archaeological sites within the project area.

The Tribe premised their request for government to government consultations with the Army Corps upon Caltrans’ ongoing failure to properly identify and protect ancestral archeological sites within the project area.

By the Tribal Resolution the Tribe also requested that an amended condition in the Army Corps’ Permit to Caltrans be the preparation of a supplemental EIS/EIR on the archeological sites within the project area. This request was based upon changes in project design since the Final EIS/EIR approved in 2006 as well the later discovery of up to 26 pre contact culturally significant archaeological sites, assumed eligible for listing on the National Register of Historic Places, that were not identified in the 2006 EIS/EIR, which only identified one such site.
Please find letter and Tribal Resolution attached.

http://savelittlelakevalley.org
Add Your Comments
Support Independent Media
We are 100% volunteer and depend on your participation to sustain our efforts!