Add an Event
Newswire
Calendar
Features
Home
Donate
From the Open-Publishing Calendar
From the Open-Publishing Newswire
Indybay Feature
Publish to Newswire
Add an Event
Related Categories: California | Central Valley | Environment & Forest Defense | Government & Elections
Is federal judge's decision a 'death warrant' for Delta smelt?
by Dan Bacher
Friday Jul 11th, 2014 6:40 PM
"The USFWS and Bureau have escorted Delta smelt to the scaffold and the judge signed the warrant," said Bill Jennings, Executive Director of the California Sportfishing Protection Alliance. "We did all we could do to prevent disaster." 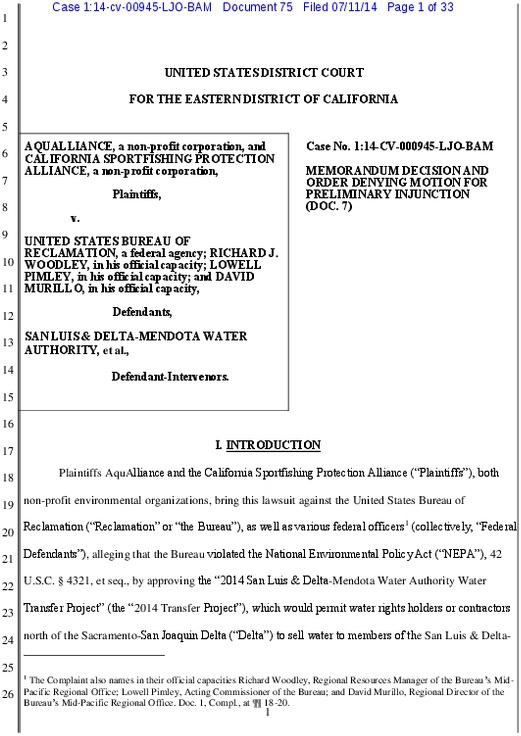 In a major setback to Delta smelt recovery efforts, a federal judge on July 11 denied a motion by an environmental group and fishing organization for a preliminary injunction against water transfers from northern California to San Joaquin Valley irrigators.

Judge Lawrence J. O’Neill of the U.S. District Court in Fresno rejected the motion for the preliminary injunction to stop the U.S. Bureau of Reclamation from transferring water through the south Delta export pumps to the San Luis and Delta-Mendota Water Authority, which includes the Westlands Water District.

The California Sportfishing Protection Alliance (CSPA) and AquAlliance filed the motion, claiming that the environmental assessment was "seriously flawed" and that the transfers posed "an eminent threat to threatened Delta smelt," according to a statement from Bill Jennings, CSPA Executive Director.

CSPA and AquAlliance had pointed out that extremely low Delta outflows this year had brought Delta smelt habitat (the low salinity zone) and Delta smelt into the Delta where they were threatened with lethal water temperatures.

The judge's decision was predicated on “agency deference” and the fact that the U.S. Fish and Wildlife Service (USFWS) and Bureau claimed that Delta smelt were not in danger because they’re not in the Delta in summer, noted Jennings.

“Courts should defer to the agency on matters within the agency’s expertise unless the agency has completely failed to address a factor that was essential to making an informed decision,"Judge O’Neill wrote.

Jennings said, “We’re deeply disappointed in the decision and will now decide our next steps. Contrary to the decision, Delta smelt are at severe risk. The U.S. Geological Survey’s state-of-the-art flow gages of Delta outflow, confirmed by increasing salinity levels, reveal a net inflow to the Delta from the ocean."

Jennnings said the 23-26 June Delta smelt survey by the California Department of Fish and Wildlife reveals that there are no Delta smelt in Suisun Bay and that 92.95% are in the Delta and exposed to high temperatures. A remnant group (7%) of Delta smelt is trapped in the Sacramento Ship Channel, but won’t likely survive August temperatures.

State fishery biologists counted only 22 smelt, once the most numerous species in the entire Delta, from June 23 to June 26. The survey included 120 trawls at 40 different locations.

Delta Smelt on the Scaffold

"The USFWS and Bureau have escorted Delta smelt to the scaffold and the judge signed the warrant. We did all we could do to prevent disaster," emphasized Jennings.

Jennings said the state and federal governments have mismanaged northern California water so poorly that there was actually a minus 45 cubic feet per second (cfs) net outflow to the Bay this May while the Department of Water Resources and US Bureau of Reclamation were reporting a plus 3805 cfs.

“Last year, excessive water exports and low outflow drew delta smelt from Suisun Bay into the central Delta where they were butchered by lethal water temperatures," Jennings revealed. "This year, with population levels hovering at historic lows: excessive transfers and exports, relaxed flow standards, high temperatures and negligible outflows may catapult the species into the abyss of extinction. On top of these threats, we were astonished to discover that the estimates of Delta outflow that state and federal agencies have reported and regulators have relied upon for years are wrong and significantly overestimate outflow in low flow conditions."

The Net Delta Outflow Index (NDOI) used to assess compliance with required flow standards is based upon a formula of both actual and estimated data. Examination of tidally filtered outflow data from the U.S. Geological Survey’s state-of-the-art UVM flow meters on the Sacramento and San Joaquin Rivers and Three-mile and Dutch Sloughs reveals that actual Net Delta Outflow (NDO) in low flow conditions are considerably lower, according to Jennings.

The CSPA has published a new report, "Delta Smelt on the Scaffold," that features an abundance index of Delta smelt showing the historically low population. The CDFW’s late June and early July 20mm Delta smelt surveys since 1996 demonstrate that Delta smelt are actually in the Delta during this period in all but the wettest years. The report also includes a comparison of USBR’s alleged Delta outflow with actual outflow monitoring from USGS’s state-of-the-art flow gages. You can read the report at: http://calsport.org/news/wp-content/uploads/Delta-Smelt-on-the-Scaffold.pdf

The Delta smelt, Hypomesus transpacificus, is an endangered fish from 2.0 to 2.8 inches long that is found only in the Sacramento-San Joaquin River Delta. It mainly inhabits the freshwater-saltwater mixing zone of the estuary, except during its spawning season when it migrates upstream to freshwater following winter "first flush" flow events, approximately from March to May.

The fish is an "indicator species" that demonstrates the health of the Bay-Delta Estuary, the largest estuary on the West Coast of the Americas. Because of its one-year life cycle and relatively low fecundity, it is very susceptible to changes in the environmental conditions of its native habitat. Massive water exports out of Delta to corporate agribusiness interests have played a key role in the precipitous decline of the fish in recent years.

The decision took place as Governor Jerry Brown is fast-tracking his Bay Delta Conservation Plan (BDCP) to build the peripheral tunnels. The tunnels won't create one drop of new water, but they will hasten the extinction of Central Valley Chinook salmon, Delta and longfin smelt, green sturgeon and other species. The project will also imperil the salmon and steelhead populations of the Trinity and Klamath rivers.

Note: The court decision plus an index of Delta smelt, results of the 23-26 June DFW Delta smelt survey, USGS flow data and salinity data that show Delta smelt to be at grave risk are attached.
§The Reality for Delta Smelt
by Dan Bacher Friday Jul 11th, 2014 6:40 PM 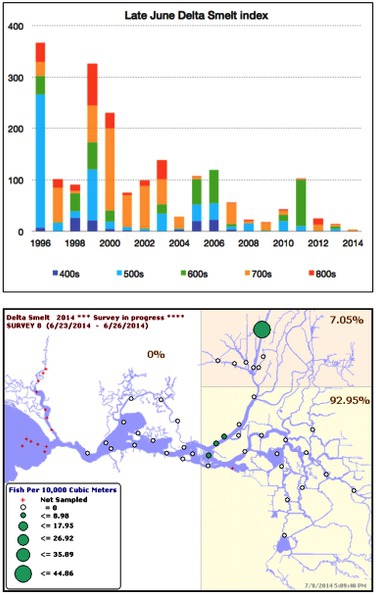 Download PDF (442.7KB)
Add Your Comments
LATEST COMMENTS ABOUT THIS ARTICLE
Listed below are the latest comments about this post.
These comments are submitted anonymously by website visitors.