Add an Event
Newswire
Calendar
Features
Home
Donate
From the Open-Publishing Calendar
From the Open-Publishing Newswire
Indybay Feature
Publish to Newswire
Add an Event
Related Categories: California | North Bay / Marin | San Francisco | Global Justice & Anti-Capitalism
Bohemian Grove- relevant as ever?
by Don Eichelberger
Monday Jul 7th, 2014 4:54 PM
The annual encampment at the exclusive Bohemian Grove will happen this 2014 summer between July 10th-27th. No formal protests are planned by the Bohemian Grove Action Network, but protesters usually show up in this resort community. Below is a report about the 2013 encampment, an examination of its history and how its influences continue to ebb and flow. 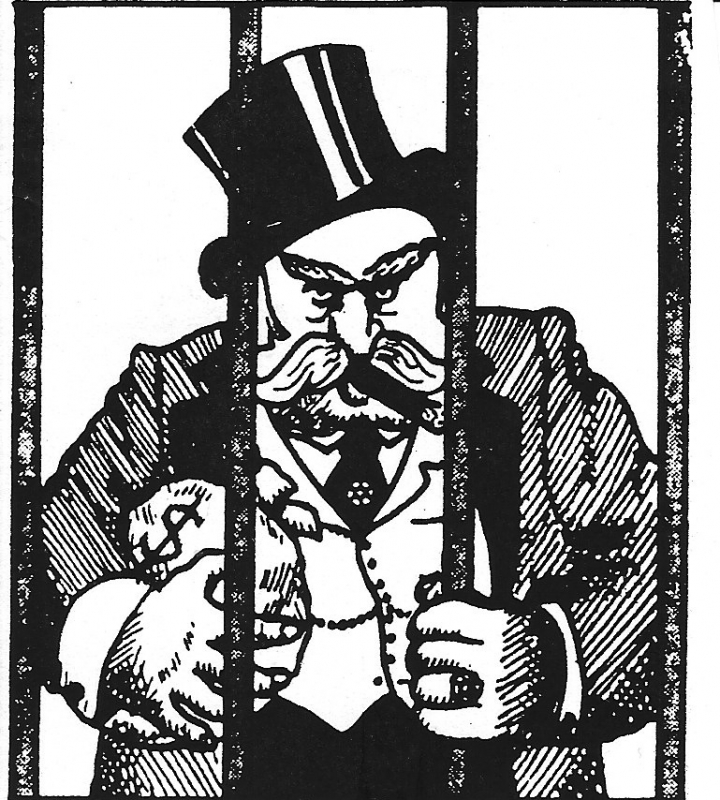 original image (769x854)
Along an eastward bend of the Russian River in Northern California a cathedral of ancient redwoods has stood silent witness every summer for over 100 years to a secretive gathering in Bohemian Grove.

In 1980, the men’s-only “HiJinx” camp-out of the elite Bohemian Club in San Francisco lost anonymity when the reach of this gathering was revealed to local feminists, anti-nuclear activists and other veterans of the peace and civil rights movements of the sixties who now resided in the rural community.

Bohemian Grove’s exceptionalism was exposed in sociologist, G. William Domhoff’s 1974 Bohemian Grove and Other Retreats- a Study in Ruling Class Cohesiveness. He laid open the Bohemian Grove assemblage as unique among thousands of elite men’s clubs in the world for its yearly, two-week, off-the-record camp-outs among men of highest rank going back more than 100 years.

Area activists already upset by the exclusive male-only club and the influx of hookers during the summer event were mobilized by Domhoff’s book. The caliber of membership- which included past (and future) US presidents, elected and appointed officials, academic and political think tank fellows, Joint Chiefs of Staff and financial moguls- identified the Grove as a local portal “not just to symptoms, but to root causes” of social disorder. It has since been protested as a cornerstone of patriarchal bonding and capitalist zealotry, and claims that business talk is forbidden, and therefore avoided, are widely disbelieved.

In 2012 the gathering was targeted by the unpredictable Occupy movement as the playground of the 1%. Bohemia remained uneasy, so in 2013 public relations-guru Sam Singer was called out to handle press for the troubled association. The Club’s nationally reputed “master spin doctor” told the press he hoped protesters would respect the right of members to assemble peacefully, and noted the club remains “exceptionally popular and relevant”.

It was interesting spin, given the Club’s efforts over the years to portray the meet up as nothing more relevant than a “group of guys in the woods having a good time”. Efforts to reach Sam Singer to clarify his meaning of “relevant” finally elicited a response from his receptionist that Mr. Singer “chooses not to answer your call”.

It seemed a pertinent question to ask a man who makes his living choosing words carefully.

“When I read that (Singer) quote, my initial response was, ‘Duh’!” said Mary Moore, founder of Bohemian Grove Action Network (BGAN), a 78 year old grandmother, retired thrift shop proprietor and thorn in the side of Bohemian Grove for over thirty years.

“I can’t say why it’s popular, but we have never doubted the relevance of the Grove; it’s good to see them acknowledge it.”

One person who finds the Grove quite relevant is Bob Carr. The Australian Minister of Foreign Affairs in 2013 told media about being invited to Bohemian Grove that summer, saying, "And why wouldn't I (accept the invitation)? I had been invited by one former US secretary of state and had the opportunity to speak to three others, each of them still with influence on policy. Each gave me a chance to explain and argue an Australian perspective" on regional issues.

Bohemian Grove is a bona fide secret society, its secretive brotherhood hard to pry in to. The Grove’s patron saint, Nepomuk, died at the hands of Bohemia's Good King Winceslas' rather than reveal the queen’s confession. An unexpected result of the protests, programs of Grove events, guest and membership lists, and other documents started surfacing, still to this day sporadically smuggled to protesters by sympathetic employees.

One small pamphlet revealed with evident pride how the atomic bomb nurtured there after Dr. Ernest Lawrence was invited by UC President Gordon Sproul to the grove encampment in 1932. While doing dinner dishes at one of the camps so the story goes, Lawrence was able to extol his idea for splitting the atom with a cyclotron to other regents, who were persuaded to oversee its funding. The first meeting of what would be the Manhattan Project also, according to the little booklet took place in a chalet at the Grove in 1942.

Smuggled encampment schedules revealed the daily “Lakeside Talks” as a staple of the gathering. The off-the-record speeches by members and guests ranged from minor talks on arts and sciences to major addresses of national, even world, social and economic import. Richard Nixon considered his speech on anti-Communism given at the grove with being his first major step toward the presidency.

“Each program adds new material to our concerns”, says Moore, “We soon began to focus on the daily Lakeside Talks to prove our case.”

Of all the known talks, by cabinet secretaries, heads of state, Fed chairmen and other powerful men, Moore points to the 1997 address at the Grove by regular guest, Supreme Court Justice Antonin Scalia on “Church, State and the Constitution” as brazen.

“Every living, breathing American should know what a Supreme Court Justice has to say about legal policies to men with the power to affect them,” Moore challenges. “Exclusive public policy discussion among an elite few has no place in an open system”.

But could the Club’s best days be behind it? The Ronald Reagan revolution was in its infancy when BGAN held its first protest in 1980. More than one Bohemian walking past the two-week vigil at the Grove gate each day sang praises of “Emperor Ronnie” (their terminology), whose imminent election would finally “release the Invisible Hand of the Marketplace”. His administration’s deregulation policies, called “Reaganomics”, are credited with the fantastic growth seen since then of high-end wealth while regular Americans’ income has stagnated.

In his first term, President Reagan, his Vice-President and a dozen Administration members were Bohemians. Today, there are no Bohemians in the Obama Administration and were only four in that of George W. Bush.

Sociology Professor, Dr. Peter Phillips theorized in an email, “It may be the move of power into the transnational arena has made national clubs less important today”. His 1995 doctoral dissertation, A Relative Advantage: Sociology of the San Francisco Bohemian Club showed that by 1991, Bohemians figured prominently on corporate boards: over 250 Bohemians sat on the boards of 201 Fortune 500 companies. Mandalay Camp, acknowledged most elite of the 125 Grove camps, tallied fifty-two directors in the fourteen companies showing three or more Bohemian board members. Today only two Bohemians sit on boards of those same fourteen companies, two of which have gone bankrupt.

While there may be fewer Bohemian directors these days, the concentration of their wealth in recent years looms large. Dr. Phillips’ dissertation observed that the top 100 American companies held assets in excess of $2 trillion in 1991. In 2012 a Chicago Fed report showed just the top five US banks held assets totaling over $8.6 trillion, excluding derivatives, going to almost $13 trillion when included.

Weaving spiders of the marketplace Bohemians struggle each year to escape weave on, but inside the Grove, guests report feeling expansive release and opportunity.

“You go in and come upon a massive parking lot”, says one violinist who attended as a guest a decade ago.

“From there inward, you sense the scale,” he continued, “It would be easy to get lost in the whole ambiance of the place, and I’m sure people go there to do that, enjoy the camaraderie, so what goes on in Bohemian Grove stays in Bohemian Grove.”

He described observing a social schism between the “captains of industry” and the professional musicians, but could see where even as a lowly artist (if he were the type) he could “sidle up to [one of the famous musicians there], talk the talk, and who knows what might happen? I had the access.”

Peter Phillips concludes in his dissertation that, while personal advantage is there for the taking, doing so is an individual choice, at least nominally discouraged by the Club’s motto, “Weaving Spiders Come Not Here”. And, while general parameters of major policy “can and have evolved”, the process is not deliberate, but “occurs through normal social intercourse”.

During a visit Phillips made as a guest at the slightly less prestigious “SpringJinx” gathering at the Grove in 1994, a former defense contractor told him, “Being at the Grove is a business advantage for me. I don’t come to the Grove first off for the business, but the guys you meet definitely give you an advantage.”

The Bohemian Club has had a long history, and is instituted to secure a long future. The next chapter being written looks to be taking a decidedly Libertarian bend. Charles and David Koch are both members. The billionaire founders of Koch Industries and Libertarianism have promoted the no government, no regulation ideal in Bohemia at least since David joined in 1997, and an argument is made that its message has taken root on fertile ground with its profits at all cost imperative.

Note: Don Eichelberger is a freelance writer in San Francisco and a founding member of Bohemian Grove Action Network

§No formal protests?!!!
by Dana
Monday Jul 28th, 2014 3:24 PM
They got away with it again and they will not go down without a fight. Well, maybe releasing their gay sexual tension at the Grove will help them not be quite as evil, but I doubt it.