Add an Event
Newswire
Calendar
Features
Home
Donate
From the Open-Publishing Calendar
From the Open-Publishing Newswire
Indybay Feature
Publish to Newswire
Add an Event
Related Categories: Santa Cruz Indymedia | U.S. | Immigrant Rights | Police State & Prisons
ACLU Claim Reveals Tucson Police Continue Rights Violations Under SB 1070 Law
by ACLU
Monday Jul 7th, 2014 4:24 PM
TUCSON – The American Civil Liberties Union has initiated a second legal claim (see PDF) against the Tucson Police Department (TPD) after finding that the implementation of the “show me your papers” provision of SB 1070 continues to result in the violation of people’s constitutional rights. The provision of the controversial anti-immigrant law went into effect in Arizona in September 2012. The claim filed today stems from a traffic stop this past January in which police conducted an “SB-1070 check,” as described in the police report against an Hispanic man named Jesus Reyes Sepulveda, and then detained him only so Border Patrol could pick him up. After three days in ICE detention, Reyes Sepulveda was released. 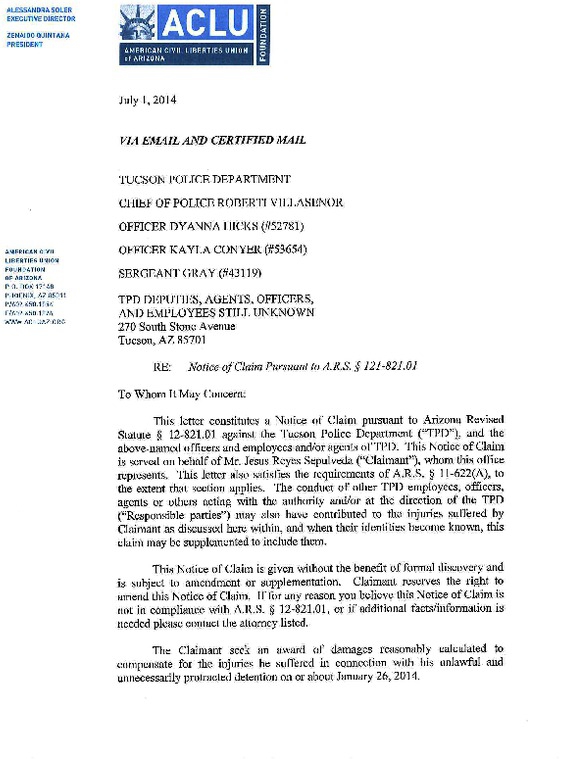 Download PDF (5.2MB)
"Unfortunately, incidents like this one further prove that implementation of this unconstitutional provision of SB 1070 ultimately relies on unlawful immigration enforcement," said Christine P. Sun, ACLU attorney. "The police report shows that officers use SB 1070 to hold people solely to turn them over to Border Patrol even without a request -- a practice that must stop."

With this claim, the ACLU has now formally filed three complaints in Arizona concerning implementation of SB 1070’s Section 2(B). Last year, in its first claim, the ACLU took action against the South Tucson Police Department (STPD) on behalf of a man who was unlawfully detained by officers and turned over to the Border Patrol. That claim charged false arrest and imprisonment, unreasonable search and seizure and violation of his equal protection under the law. A settlement was announced in May that resulted in a complete overhaul of STPD department policies with respect to immigration enforcement. Among the policy provisions adopted by the STPD was a data collection requirement to help ensure adequate oversight of officers’ conduct, and an agreement that police officers could not prolong stops for the purpose of checking a person’s immigration status.

The ACLU also filed a similar claim against the Tucson Police Department in April of this year, which is still pending. In that incident, similar to the one here, TPD officers pulled over two Hispanic men and held them solely to call Border Patrol and to have those agents pick them up. The incident sparked a large community protest against TPD for its immigration enforcement policies. Advocates in Tucson have been calling on Chief Villasenor to reform the police department’s treatment of immigrants ever since Section 2(B) went into effect nearly two years ago.

"Tucson has declared itself an immigrant welcoming city, but the reality is that local law enforcement’s entanglement with the Border Patrol has been allowed to persist for far too long," said James Lyall of the ACLU of Arizona. "The City of Tucson and other Arizona municipalities can and should follow the lead of South Tucson and take steps to mitigate the harm SB 1070 has done to our communities."

In 2012, the U.S. Supreme Court struck down most of the law’s key provisions, and while the justices declined to enjoin Section 2(B) of SB 1070, they did determine that detaining people "solely to verify their immigration status would raise constitutional concerns." Monitoring of law enforcement's implementation of the "show me your papers" provision has shown that—just as the ACLU and other civil rights groups have argued—the law unconstitutionally authorizes and encourages illegal police practices, including racial profiling and unlawful immigration enforcement.

Other abuses documented by the ACLU that have occurred because of Section 2(B) include:

* Mesa Police Department’s jailing of a 67-year-old Latino citizen after he picked a water bottle out of a trash can at a convenience store;

* Casa Grande Police Department’s jailing and transporting to U.S. Immigration and Customs Enforcement a passenger of a car that was stopped for having a burnt-out taillight;

* Tucson Police Department’s questioning of a woman about her immigration status after she called on them to assist her in a domestic violence situation; and

* Phoenix Police Department’s unconstitutional search and detention of a legal resident who was questioned about his immigration status while picking up his car from an impound lot.

In addition to the filing of legal claims against police departments in Tucson and South Tucson, the ACLU and its partners have been talking with law enforcement and local governments throughout Arizona to inform them about the law’s basic failings, explaining that the provision of the law that was allowed to go into effect does not provide an excuse for discriminatory police practices.

https://www.aclu.org/
Add Your Comments
Support Independent Media
We are 100% volunteer and depend on your participation to sustain our efforts!