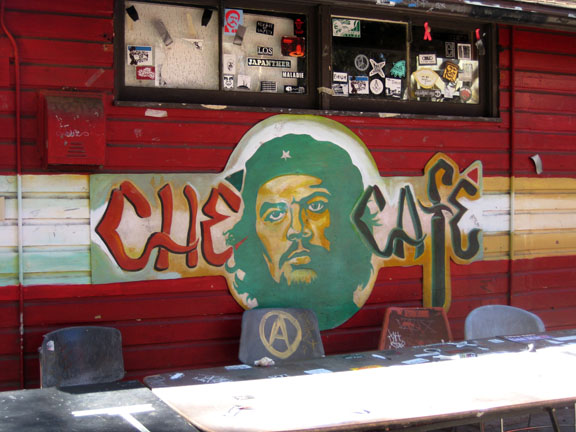 The Che Cafe is one of the most important cultural, political, and artistic institutions in California. The Che, which is a worker owned collective residing on the University of California campus in San Diego is being threatened with eviction on July 13th, 2014. The Che Cafe has been run by students since it's foundation in 1980.

Many will likely have heard of the Che Cafe as a music venue, which has hosted artists from all over the world. Some may have eaten there for their famous all you can eat vegetarian dinners, while others may have gone to a political solidarity event. During the 1980s, the Che hosted countless events in solidarity with the people all over central america, and worked to bring down Apartheid. In the 90s the Che served as an organizing hub for those in solidarity with the Zapatistas, and hosted countless events to oppose the first Gulf War. Today, it continues in that tradition, still hosting artists, events, and is still run collectively.

For many of the hundreds of people who joined the collective, it introduced them to the concepts of collectivity and consensus decision making. I was a collective member when I was a student at UCSD. The Che to this day serves as a model for a new society, teaching the building blocks of organizing and working together outside of traditional capitalist relations, specifically the soul sucking existence of a top-down boss-worker relationship.

Now, the UCSD administration claims that Che Cafe is a cost burden which is not supported by students, and has delivered them a 30 day eviction notice which ends on July 13, which is just two weeks away.

Since the eviction notice, there has been a massive outpouring of support, but it's clear more is needed. Recently, Zack de la Rocha from Rage Against the Machine wrote a letter of solidarity explaining that the loss of the Che Cafe would be, in so many words, tragic.

Zack writes, "I have performed at the Che Cafe a number of times and always left more empowered, more informed, and more inspired than when I arrived. Like so many others, I am personally indebted to the dedicated people throughout the years who have tirelessly worked to create a safe, all ages, truly democratic venue; one that should be embraced and defended as an indispensable campus forum for art and ideas.

Discussion with collective members (past and present): Indymedia On Air - Che Cafe show by Chris Burnett

More: Save the Che: Letter from Zack de la Rocha by Chris Burnett

http://checafe.ucsd.edu
Add Your Comments
Support Independent Media
We are 100% volunteer and depend on your participation to sustain our efforts!