Add an Event
Newswire
Calendar
Features
Home
Donate
From the Open-Publishing Calendar
From the Open-Publishing Newswire
Indybay Feature
Publish to Newswire
Add an Event
Related Categories: California | Central Valley | Environment & Forest Defense | Government & Elections
California activists protesting money in politics declare victory
by Dan Bacher
Thursday Jul 3rd, 2014 5:28 PM
"We're in a time when corporations have more rights and have a louder voice than the people, as proven by recent Supreme Court decisions and the inability to pass legislation limiting corporation campaign contributions," said Paulina Gonzalez of Oakland, who was one of the five arrested last night. "I am here to send the message that corporations aren't people and that money is not free speech. This is the People's House and we have to take back our democracy."

Photo of 99Rise sit in at the State Capitol on July 2 by Dan Bacher. 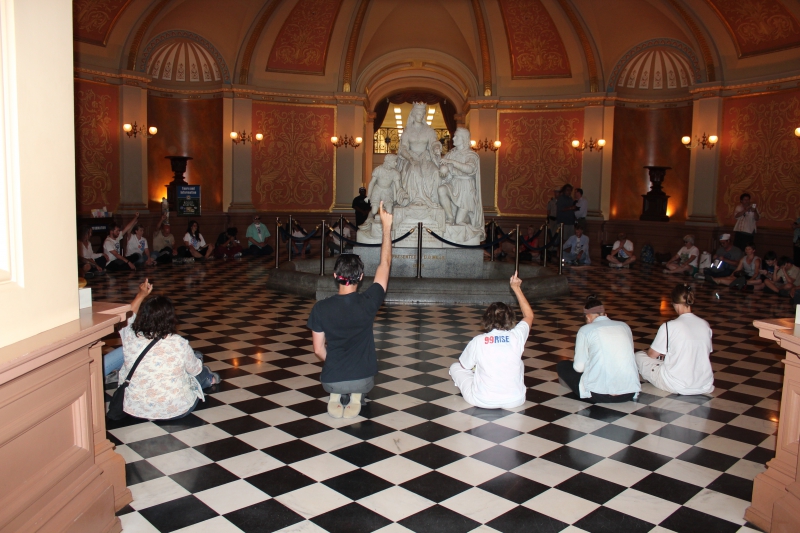 After 5 more people were arrested in the State Capitol Rotunda in Sacramento at a sit in last night, activists from the group 99Rise today announced the end of their twelve-day occupation and civil disobedience campaign to get the corporate money out politics.

The unprecedented campaign resulted in 47 arrests, 2 legislative victories, and a private meeting with Governor’s Jerry Brown staff to discuss the corrupting influence of big money in politics, according to a statement from the group.

"We're in a time when corporations have more rights and have a louder voice than the people, as proven by recent Supreme Court decisions and the inability to pass legislation limiting corporation campaign contributions," said Paulina Gonzalez of Oakland, who was one of the five arrested last night. "I am here to send the message that corporations aren't people and that money is not free speech. This is the People's House and we have to take back our democracy."

The campaign takes place at a time when corruption is mushrooming in California politics. In March, Senators Leland Yee of San Francisco, Ron Calderon of Montebello and Rod Wright of Inglewood were suspended from the State Senate with pay. Senators Yee and Calderon were indicted in separate federal corruption cases, while Senator Wright will be sentenced on July 21 on criminal charges that he lied about where he lived when he ran for office in 2008. (http://blogs.sacbee.com/capitolalertlatest/rod-wright/#storylink=cpy)

“We walked 480 miles from L.A. to Sacramento with two simple demands for our state leaders: that they publicly acknowledge the crisis of corruption and take immediate action to end it,” said Kai Newkirk, co-founder and organizer with 99Rise. “Twelve days and almost 50 arrests later, we feel confident that those demands have been met and that the people have been heard.”

Alll three of their legislative demands - AJ R1, SB 1272, and SB 52 - have been advanced since the marchers arrived in Sacramento on Sunday, June 22.

AJR 1 calls for Article 5 of the U.S. Constitution to be amended to remove the big money out of politics.

SB 1272 calls for a voter initiative in California that will allow the state's citizens to weigh in on the Citizens United court decision of 2010.

SB 52, also known as the Disclose Act, would make it mandatory that all political advertisements prominently display the top three donors on the ad.

As activists conducted a sit-in within the rotunda last night, Assembly member Jimmy Gomez urged the group to continue their struggle to remove the money and corruption from politics.

"The only way to get change is to have people on the inside and people on the outside fighting for a common goal," said Gomez. "We're trying to make positive change on finance reform in the Legislature. Keep our feet to the fire - that's how we will get ahead."

In addition to gaining the support of Legislators, the Rise99 campaign received support from Dolores Huerta, the co-founder of the United Farmworkers Union and currently the President of the Dolores Huerta Foundation, who marched with the protesters in Sacramento and spoke at a rally at the State Capitol on June 22.

"We got to get public financing of political campaigns so that we can elect good people to office," said Huerta. "We have to work the streets, but we also need to get out the vote. Only 25 percent of Californians voted in the last election - that means that 75 percent didn't. We have to get good people elected to office and get our neighbors out to vote."

She ended her speech, but shouting, as the crowd joined in, "Viva La March for Democracy! Viva 99Rise! Si Se Puede!"

David Braun of Californians Against Fracking also spoke at that rally. "Only in a world where corruption and corporate influence rules would the government allow a destructive and dangerous practice like fracking to occur," he said.

He emphasized that there is no more clear example of the power of corporate money in politics than the recent failure of a fracking moratorium bill in the California Senate.

"The Senators who voted against the legislation took 14 times more money from the oil and gas industry that those who voted for it. That, of course, is taking place in a state where the overwhelming majority, 68 percent, of the public wants fracking stopped," stated Braun.

Curt Ries, 99Rise spokesman, summed up the victories that the group and its allies achieved over the past 12 days.

"We came here with two simple demands: that our state leaders (1) publically acknowledge the crisis of corruption and (2) take immediate action to end it. We feel very successful in achieving both demands," said Ries.

"We moved all three bills forward and were able to capture the attention of state legislators to come over to the side of the people and acknowledge that big money is corrupting our democracy and that we have to take action. This campaign is just the beginning - we're building a mass movement of direct nonviolent resistance to get the big money out of politics,” he concluded.

Background: The Revolving Door of Corruption

The revolving door between corporate interests, water contractors and state government that is the result of corporate money's overwhelming influence in California politics was demonstrated last September when Governor Jerry Brown appointed Laura King Moon of Woodland, a lobbyist for the state’s water exporters, as chief deputy director of the California Department of Water Resources (DWR).

Moon was a project manager for the Bay Delta Conservation Plan since 2011 while “on loan” from the State Water Contractors, a non-profit association of 27 public agencies from Northern, Central and Southern California that purchase water under contract from the California State Water Project.

And Moon's appointment was just one of the many examples of the revolving door between corporations and state government that have infested politics in California during the Schwarzenegger and Brown administrations. These examples include:

• The resignation of State Senator Michael J. Rubio in February 2013 to go work in a "government affairs" position for Chevron. Rubio, who was leading the charge to weaken the landmark California Environmental Quality Act (CEQA) and make it more friendly to corporations, claimed he resigned in order to spend more time with his family. (http://www.dailykos.com/story/2013/02/23/1189354/-Senator-Michael-Rubio-resigns-to-take-job-with-Chevron)

• DWR's hiring of Susan Ramos "on loan" from the Westlands Water District, the "Darth Vader" of California water politics, to serve as "a liaison between all relevant parties" surrounding the Delta Habitat Conservation and Conveyance Program (DHCCP) and provide "technical and strategic assistance" to DWR. (http://www.indybay.org/newsitems/2011/12/14/18702762.php)

• The failure of Katherine Hart Johns, Central Valley Regional Water Quality Control Board member, to report her husband’s separate property interest in his lobbying firm, California Resource Strategies, Inc., on her 2006, 2007, and 2008 annual Statements of Economic Interests. The California Fair Political Practices Commission fined Hart Johns only $600 for this overt conflict of interest, in a classic example of how violators of state ethics and environmental laws often get off with a mere "slap on the wrist." (http://www.sacbee.com/2010/03/21/2622315/water-pollution-regulator-failed.html).

The oil and gas industry is the largest and most powerful corporate lobby in Sacramento. A report released on April 1, 2014 by the ACCE Institute and Common Cause reveals that Big Oil has spent $143.3 million on political candidates and campaigns – nearly $10 million per year and more than any other corporate lobby – over the past fifteen years. (http://www.indybay.org/uploads/2014/04/10/bil_oil_floods_the_capitol_4.1.14v2.pdf)

But Big Oil exerts its influence not just by making campaign contributions and serving on government regulatory panels, but also by lobbying legislators at the State Capitol. The oil industry spent $123.6 million to lobby elected officials in California from 1999 through 2013. This was an increase of over 400 percent since the 1999-2000 legislative session, when the industry spent $4.8 million. In 2013-2014 alone, the top lobbyist employer, Western States Petroleum Association, spent $4.7 million.

Nor can we overlook one of the greatest scandals to hit environmental politics in recent years - the 10 month federal prison sentence that a federal judge in May imposed upon Ron LeValley of Mad River Biologists, the former co-chair of the Marine Life Protection Act (MLPA) Initiative Science Advisory Team for the North Coast, for his role in a conspiracy to embezzle over $852,000 in federal funds from the Yurok Tribe.

In February, LeValley pleaded guilty to a single federal charge of conspiracy to commit embezzlement and theft from an Indian Tribal Organization (18U.S.C §§ 371 and 1163) in the complex scheme in collaboration with former Yurok Forestry Director Roland Raymond. According to court documents, LeValley submitted more than 75 false invoices between 2007 and 2010 in payment for “work” on northern spotted owl surveys that was never performed. The link to the indictment is available at: http://noyonews.net/wp-content/uploads/2013/10/U.S._v._Ron_LeValley_As_Filed.pd.

There is no doubt that now is the time to get the corporate money and corruption out of state and national politics!
§Kevin Carter
by Dan Bacher Thursday Jul 3rd, 2014 5:28 PM 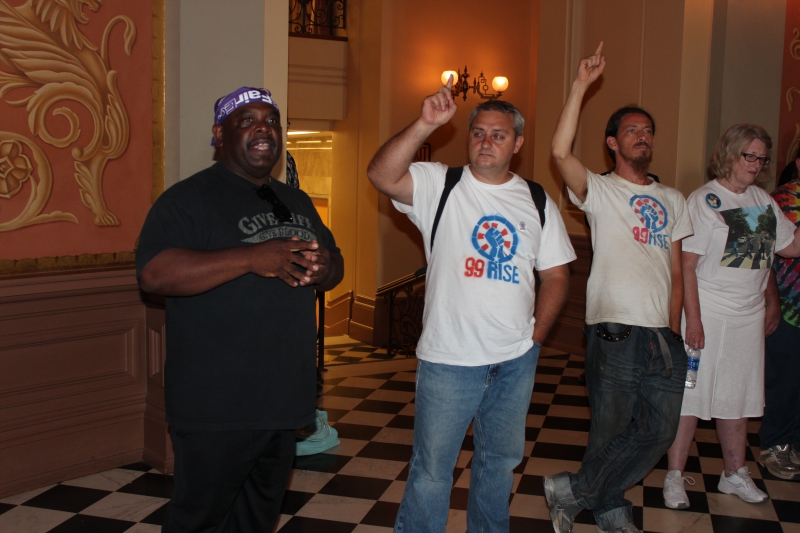 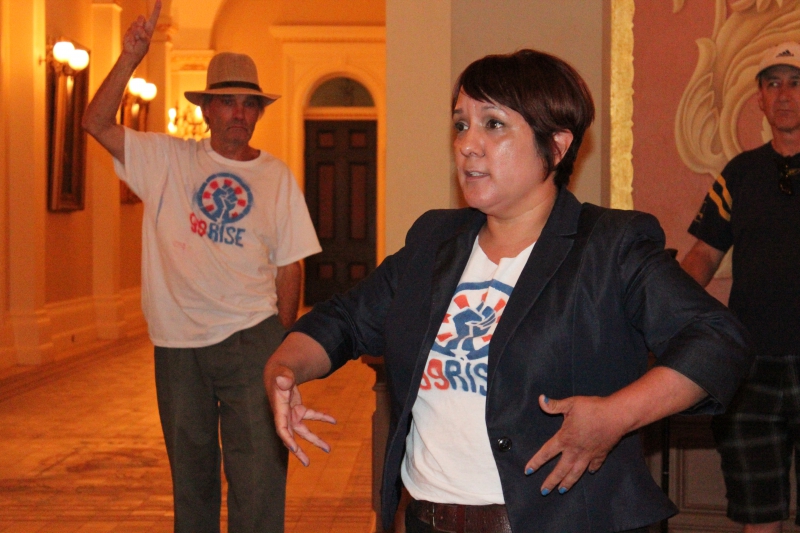 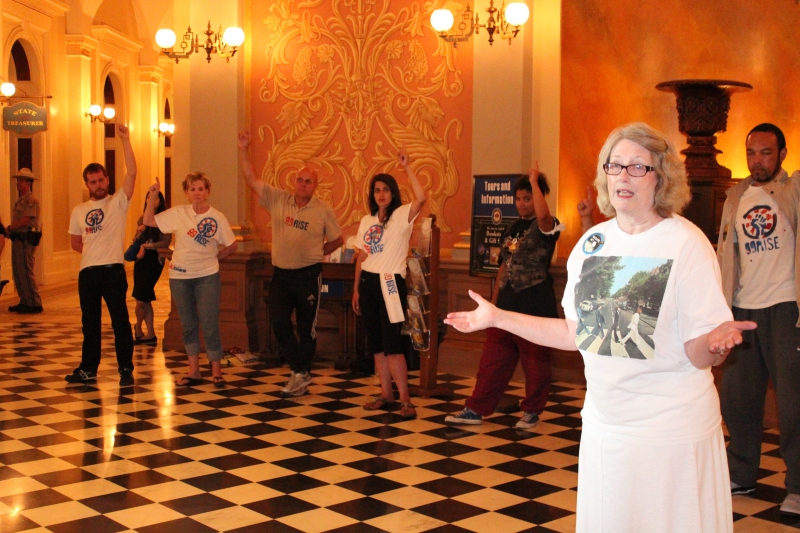 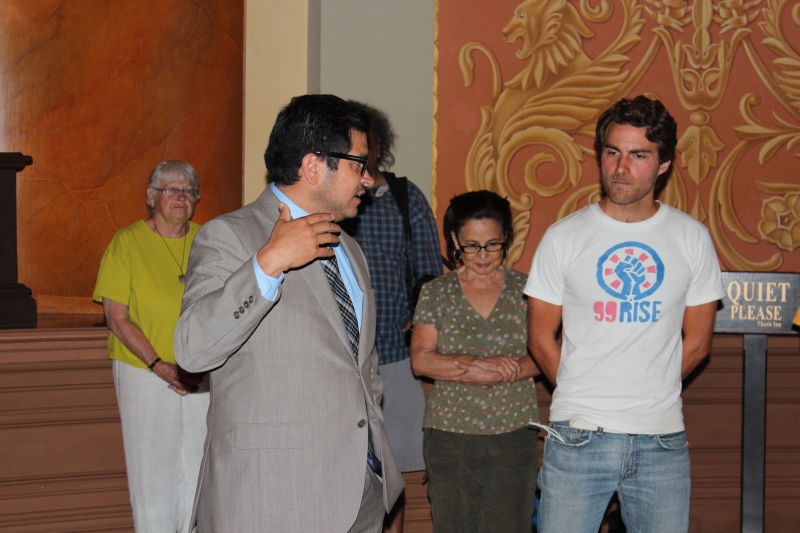 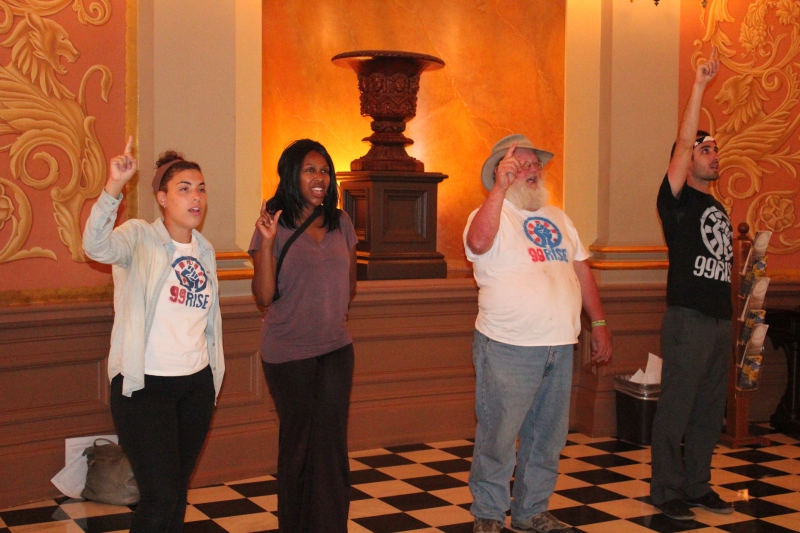 original image (5184x3456)
Anti-corruption activists from throughout the state came to Sacramento for the 99Rise Protest. Photo by Dan Bacher. 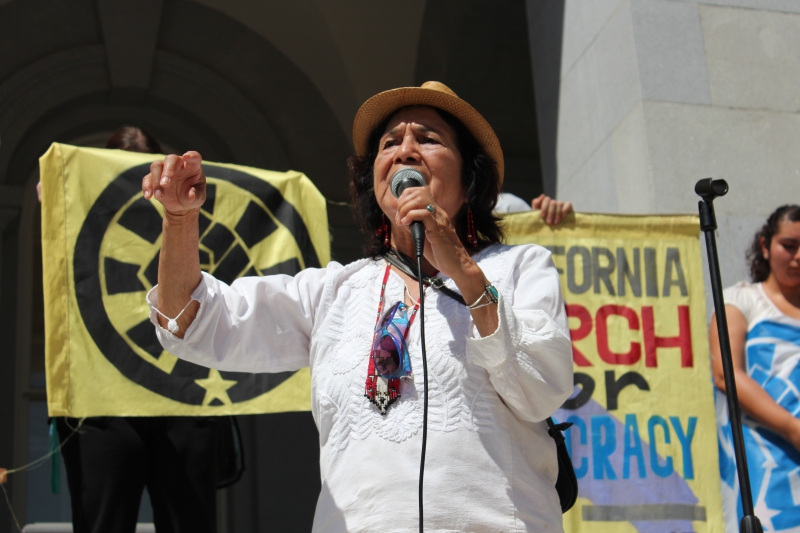 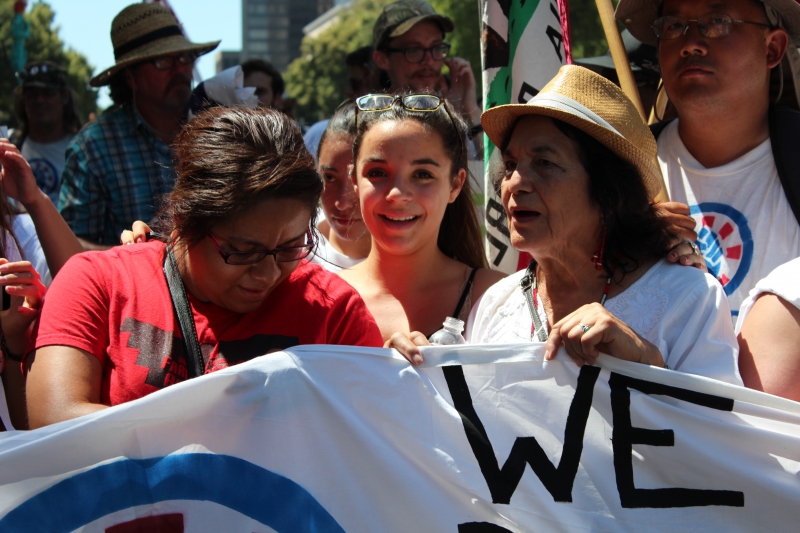 original image (5184x3456)
Dolores Huerta marched at the head of the march when it arrived in Sacramento on June 22. Photo by Dan Bacher.
§The marchers arrive
by Dan Bacher Thursday Jul 3rd, 2014 5:28 PM 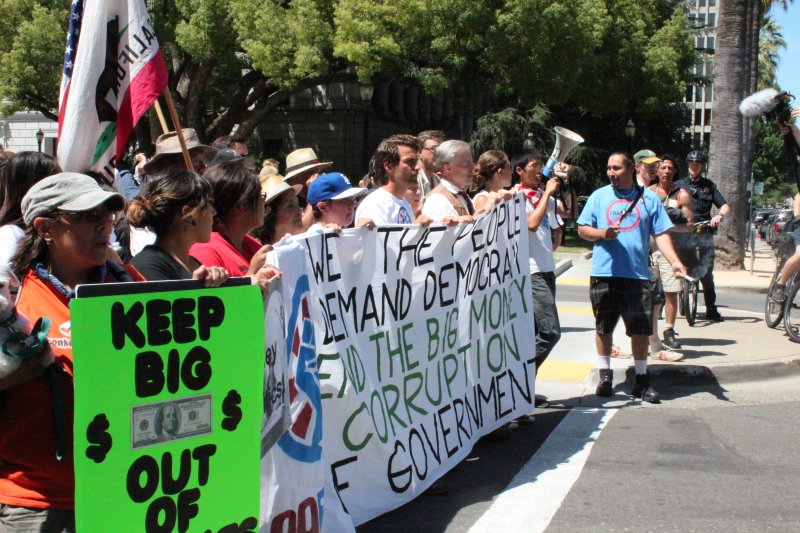 The marchers arrive at the Capitol. Photo by Dan Bacher.
§We the people
by Dan Bacher Thursday Jul 3rd, 2014 5:28 PM 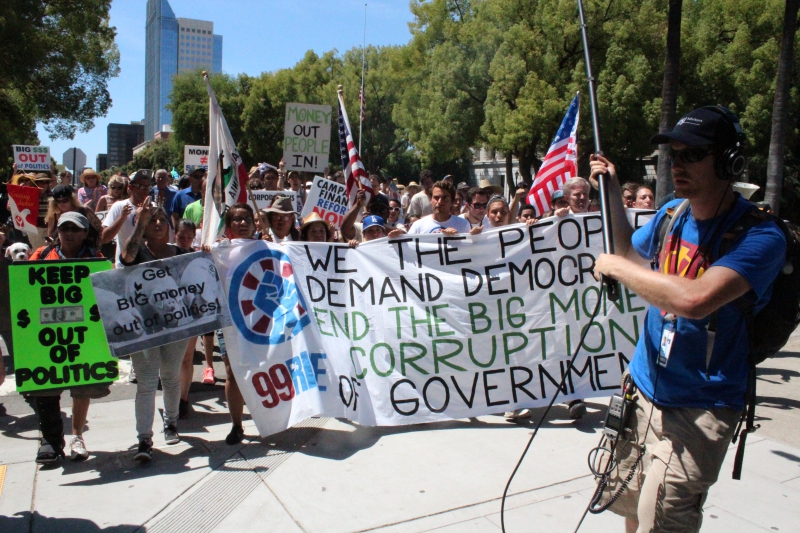 Marchers say, "We the people demand Democracy. End the Big Money corruption of government." Photo by Dan Bacher.
Add Your Comments
Support Independent Media
We are 100% volunteer and depend on your participation to sustain our efforts!