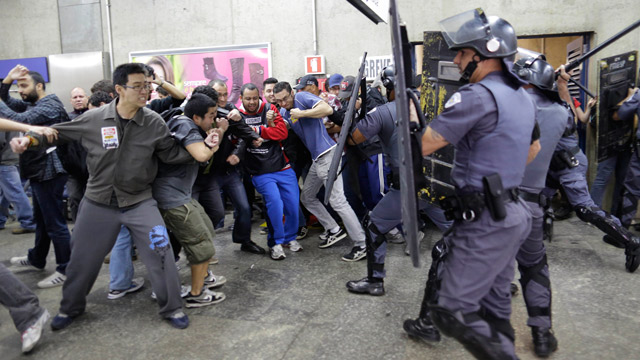 Bring Your Placards, Banners And Balls

URGENT CALL FROM BRAZIL: WE NEED YOUR SOLIDARITY

Sao Paulo Transit Workers: Intensify the struggle, defend the right to strike, prevent any punishment, we want to negotiate now.

Everyone has been following the mobilizations going on in Brazil with strikes and demonstration by workers and popular organizations expressing their indignation about the World Cup with its astronomic costs and corruption, all in function of the interests of the multinational companies and FIFA.

But at the same time people have been .putting forward their concrete struggles making demands for salaries, rights, housing, better public services. They have denounced repression and criminalization of dissent, etc.

At this moment, the transit workers in Sao Paulo are in the fifth day of a strike which began last Thursday. The transport workers carry 4,000,000 passengers every day in the city where, next Thursday, June 12, the opening of the World Cup will take place. Because this strike is so important, the government has decided that it has to be defeated come what may. It is seeking to impose an end to the strike and also prevent the mobilizations from escalating in the coming days.

Brazilian Justice, working hand in hand with the interests of the government, big business and FIFA declared the strike illegal today and demanded that the transit workers return to work immediately. It has established a daily fine of US$ 250,000 on their union for non-compliance.

This decision by the Justice Ministry allows the government to dismiss the strikers, contravening all their legal and economic rights.

The Union and the workers have decided to continue the strike, despite the government’s orders, in order to defend their demands and also to defend their right to strike.

We need your support and solidarity. Send messages to the e-mails below, post photos on social networks, broadcast this call on your lists and web sites

Response to the demands of the transit sector

In defence of the right to strike.!

No to repression, no punishment!

International Network of Solidarity and Struggle


SAO PAULO — A subway strike in Sao Paulo that threatened to disrupt the opening of the World Cup was averted Wednesday night even as airport workers in Rio de Janeiro declared a 24-hour work stoppage in the main destination for soccer fans traveling to Brazil.

Some 1,500 subway workers in Sao Paulo voted against going back on strike in a pay dispute. They had suspended the walkout Monday amid a popular backlash and government pressure to end the transportation chaos in Brazil's biggest city.

"We thought that right now it's better to wait," union president Altino Prazeres said, but added that he wouldn't rule out resuming the strike sometime during the monthlong soccer tournament. "We get the feeling that maybe we aren't as prepared for a full confrontation with police on the day the World Cup starts."

The union said its members would hold a march Thursday morning demanding that 42 workers fired during the five-day work stoppage are rehired.

World Cup organizers are counting on Sao Paulo's subway system to carry tens of thousands of fans Thursday to Itaquerao stadium, where Brazil will play Croatia in the tournament's first game far from the hotel areas where most tourists are staying.

Even as tensions eased in Sao Paulo, labor conflicts heated up in Rio, where fans were arriving ahead of Sunday's match between Argentina and Bosnia-Herzegovina.

On Wednesday, check-in counter clerks, baggage handlers and janitorial staff who have been demanding raises of at least 5.6 percent for several months voted to strike starting at midnight. The work stoppage will affect the city's Galeao international airport as well as the Santos Dumont airport that connects Rio to other Brazilian destinations

A union representative said only 20 percent of workers would stay off the job for 24 hours, abiding by a labor court order that threatened to fine unions more than $22,000 if staffing fell below 80 percent of normal levels. The official agreed to discuss specifics of the walkout only if not quoted by name because he wasn't authorized to speak publicly.

The airport workers' strike is the latest unrest to hit Brazil as workers battered by several years of high inflation take advantage of the spotlight from the World Cup to pressure for pay raises from employers and the government.

In the northern city of Natal, where the United States plays its first game Monday against Ghana, bus drivers will stay home Thursday for at least 24 hours to press their demands for a 16 percent pay increase.

Teachers remain on strike in Rio and routinely block streets with rallies, and subway workers in that city briefly threatened a walkout. Police in several cities have also gone on strike in recent weeks, but are back at work now.

There also has been a steady drumbeat of anti-government protests across Brazil criticizing the billions spent on hosting the World Cup and demanding improvements in public services. The protests that began last year have diminished in size but not in frequency, and they also have disrupted traffic at times.


At a meeting in June 11, the subway workers of São Paulo approved a campaign for the reinstatement of the 42 workers dismissed from the Metro Company for participating in the strike.

Of these, 11 are directors of the union. They also decided not paralyze the activities on the 12th, but remain mobilized. Three workers were reinstated, but the subway workers will continue fighting for the reinstatement of all.

"There is no vandal here. The only vandal is the governor Geraldo Alckmin," said Altino Prazeres, president of the union and PSTU's militant. He also said that the sector was proud of the five-day strike they have done.

On June 12, the opening day of the World Cup, the sector participated in the protest against the injustices of the Cup. The concentration for the act was scheduled for 10 am in front of the of Subway Workers Union.

The subway workers held one of the strongest strikes in their history. With a membership participation close to 100% in almost all workplaces, the sector faced the intransigence of Alckmin's government and its subservient Labor Justice, in addition to a massive campaign by the media in order to turn the public opinion against the workers.

The PSDB's government, however, besides refusing to negotiate, deployed the Shock Troops against the employees on strike and yet determined the dismissal of 42 workers. Even when the Company's board of directors was waving in rediscussing layoffs, Alckmin personally decided to maintain the arbitrary measure, proving that it was a political attack to weaken the mobilization and make the subway workers an example to other working sectors.

The subway workers strike, however, managed to bring together a broad support, from other branches of workers both around the country and internationally. A significant part of the population expressed support for the workers on strike, condemning the repression and cruelty of the "tucano" government.

It's time now to strengthen the campaign for the reinstatement of the subway workers. This struggle is not only for reinstating the dismissed workers to their jobs, but it is a struggle for freedom of organization and strike by the working class.

Click here and sign the petition in support of the immediate reinstatement of the subway workers!
https://secure.avaaz.org/po/petition/LUIS_ANTONIO_CAMARGO_DE_MELO_MPT_Claudia_Regina_Lovato_Franco_MPT_SP_Queremos_a_anulacao_das_quarenta_e_duas_demissoes_d/?dEeBEdb
#somostodosmetroviários #readmissãojá

END_OF_DOCUMENT_TOKEN_TO_BE_REPLACED
Added to the calendar on Wed, Jun 25, 2014 11:51PM
Add Your Comments
Support Independent Media
We are 100% volunteer and depend on your participation to sustain our efforts!