Add an Event
Newswire
Calendar
Features
Home
Donate
From the Open-Publishing Calendar
From the Open-Publishing Newswire
Indybay Feature
Publish to Newswire
Add an Event
Related Categories: East Bay | Police State & Prisons | Racial Justice
Support Needed: Ohlone Activist Wicahpiluta (Luta) Candelaria Brutalized by Police
by via Laura Cedillo
Sunday Jun 22nd, 2014 9:42 PM
Our Friend/Warrior, Wicahpiluta Candelaria, Luta was the victim of Police Brutality on Friday night and continues to be in custody. We are looking for folks to assist in contributing to his legal defense. 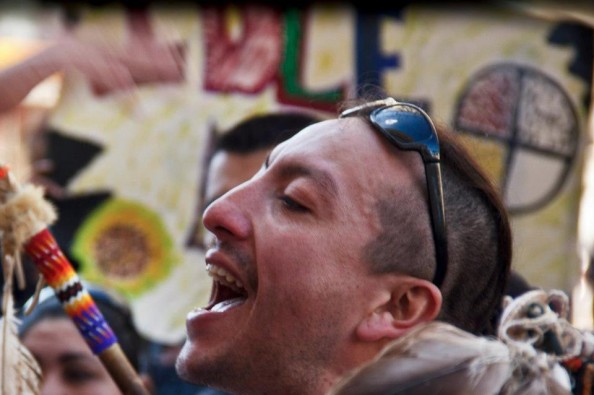 Luta was walking home in San Leandro when he was approached by police officers asking where he was headed... He answered home and they pushed for an address, Luta declared he didn't need to give that information and was ambushed from behind by 7 police officers. He was badly beaten, his eye socket was broken.

Luta has court on Monday, June 23 and would also appreciate folks support to be witness to this at 2pm in Hayward on Amador Blvd.

Luta has stood up and offered songs at so many events and for many folks as they were sick, lets help him now to come home. He is being charged with obstruction of justice....We are also interested in finding a lawyer that could also help....

For more info about Luta, see:
https://www.facebook.com/yelamu.savage
§Exact Address??
by Support Luta! Monday Jun 23rd, 2014 3:32 AM
I'm not certain, but I'm guessing this is the correct address: