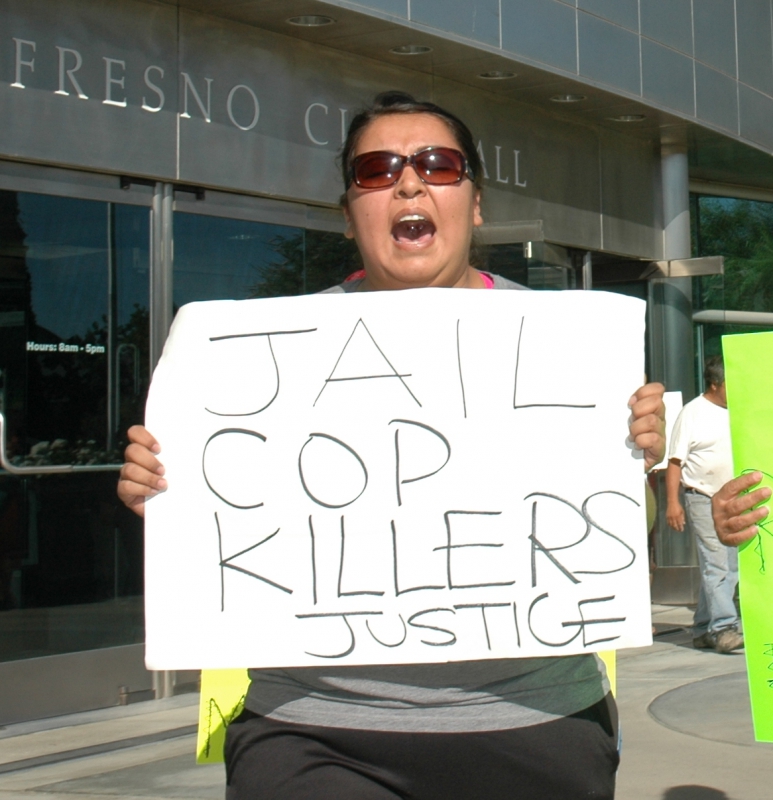 original image (1166x1206)
On Monday, about 100 people protesting the shooting of a 22 year old man by two Fresno Police Officers held a rally, tried to see mayor Ashley Swearengin, and marched to police headquarters. It was a spirited event, which included several of the family members of the man who was shot 17 times on June 11. The protestors demanded changes at the Fresno Police Department (FPD) that would lead to fewer officer involved shootings (OIS).

In a letter sent to mayor Swearengin and handed to City Manager Bruce Rudd they wrote “We are requesting a meeting with your office to discuss the use of deadly force by Fresno Police officers. As you may know a non-English speaking farmworker who was intoxicated and holding a knife was shot several times by two officers on June 11, 2014. As you may also know, two days later on Friday June 13th, Fresno law enforcement officers managed to negotiate the surrender by a man with a gun. The second incident, which lasted 5 hours, indicates two things:

1) Negotiation with suspects works and
2) The June 11th incident as well as others could have been prevented.”

As a group of about 15 family members and protestors waited for a response from the mayor, security arrived and demanded everyone leave. There were concerns that, since nobody was leaving, that arrests might take place. Some mothers with small children left. The tension was broken when City Manager Bruce Rudd arrived and agreed to meet with representatives from the group.

Leaving City Hall, the protestors carried a coffin and signs to the Fresno County Jail, a couple of blocks away. After a short rally, the march headed to the FPD headquarters where family members had the opportunity to share their feelings.

While at the FPD headquarters someone wrote chalk messages on the sidewalk and a police memorial nearby. In an email sent to the media, following the event, the FPD wrote “An examination of the monument revealed the suspects used chalk to scrawl ant-police slogans and phrases on both sides of the monument. The suspects also scrawled similar gibberish on the sidewalk all around the entrance of police headquarters.”

Organizers have called for another demonstration this Wednesday, June 18 at 4 p.m. to protest recent police shootings and to demand changes in FPD policy. For more information call Juan Avitia (559) 077-4247, MAPA President. 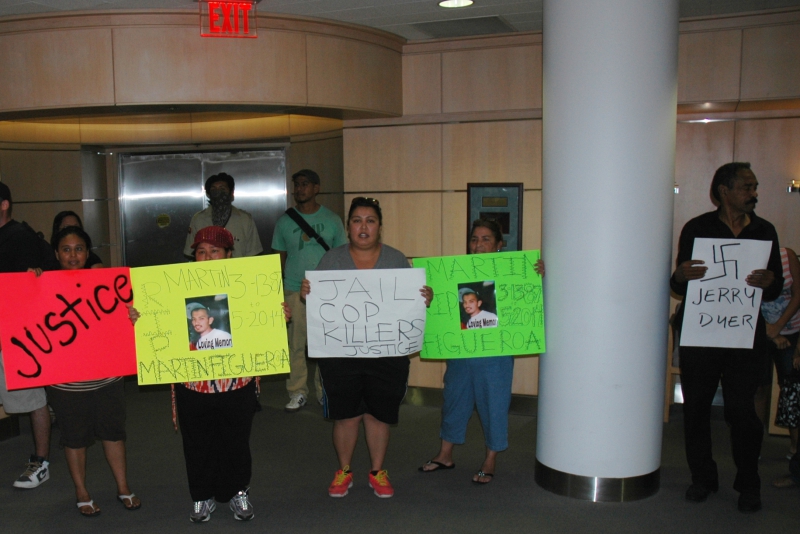 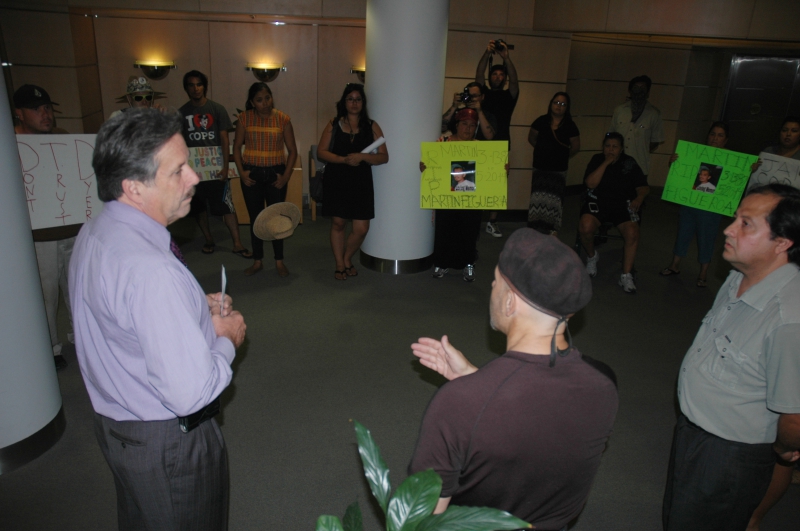 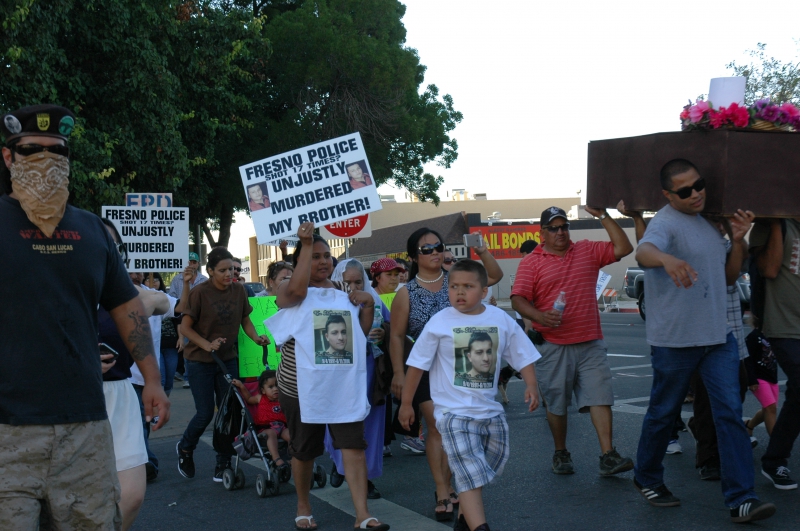 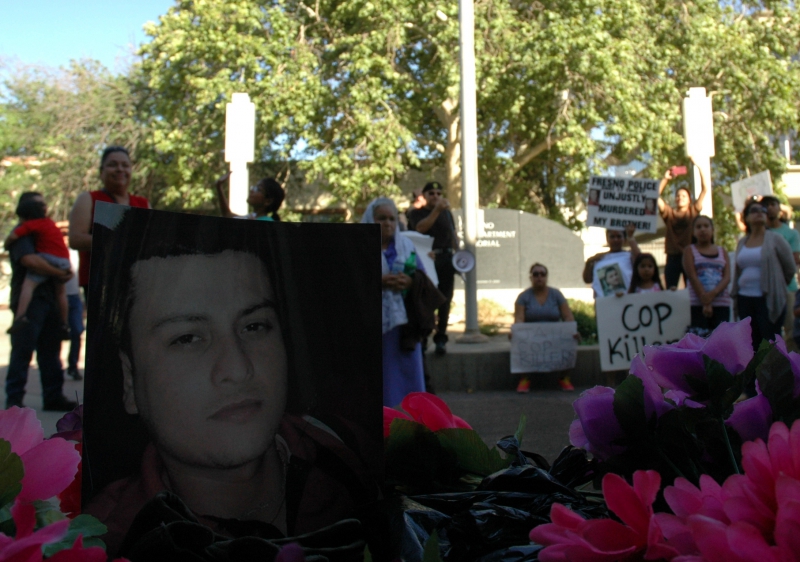 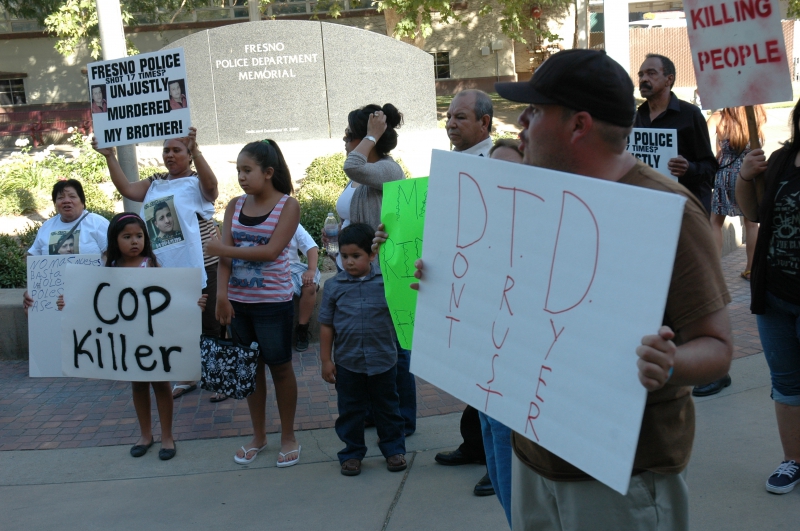 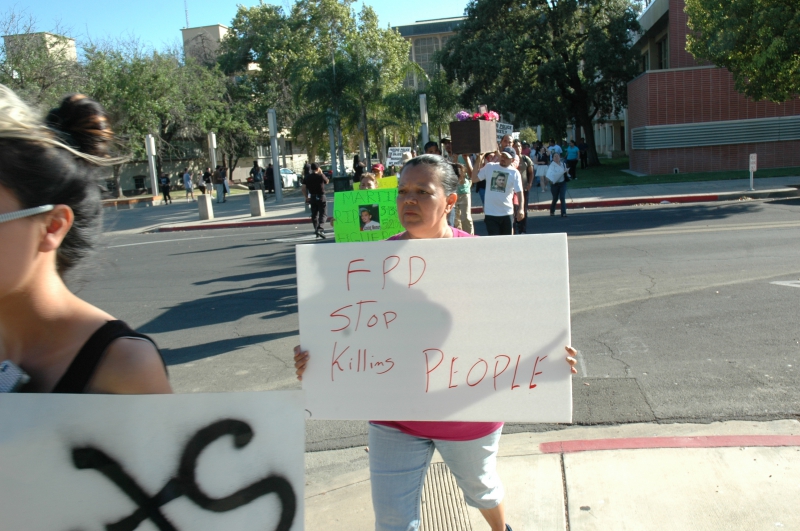 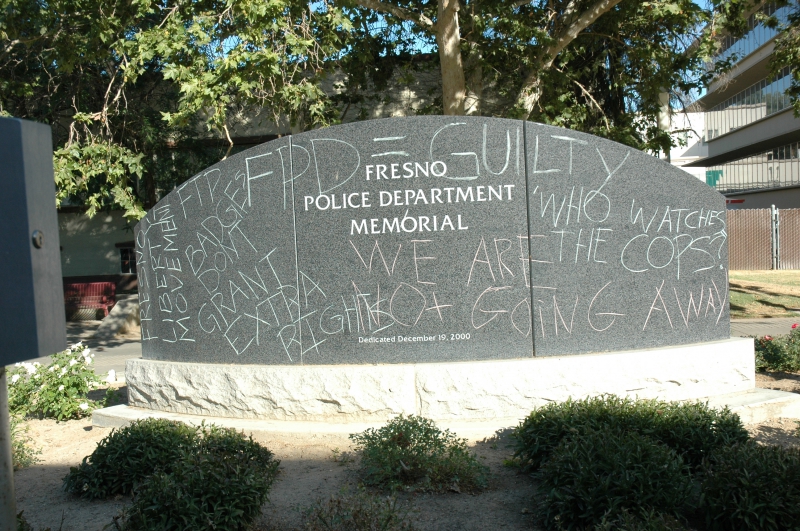 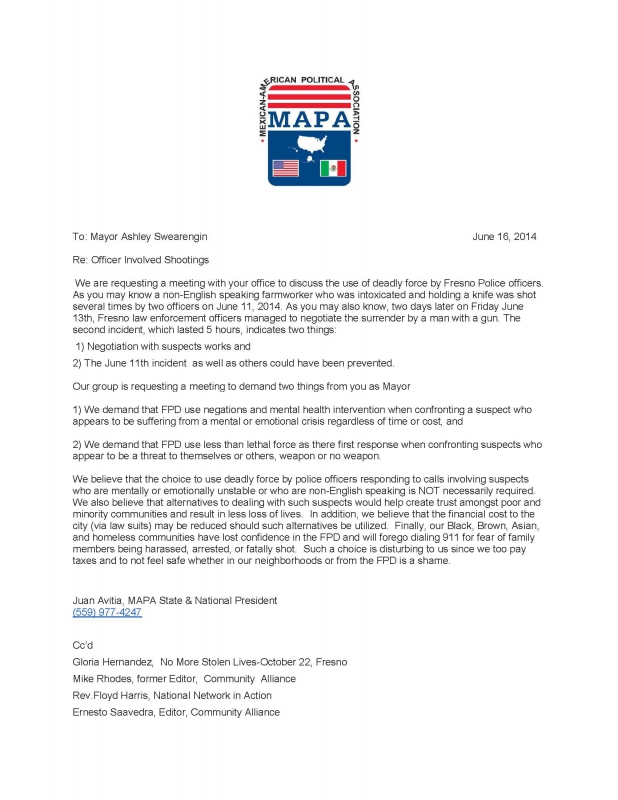 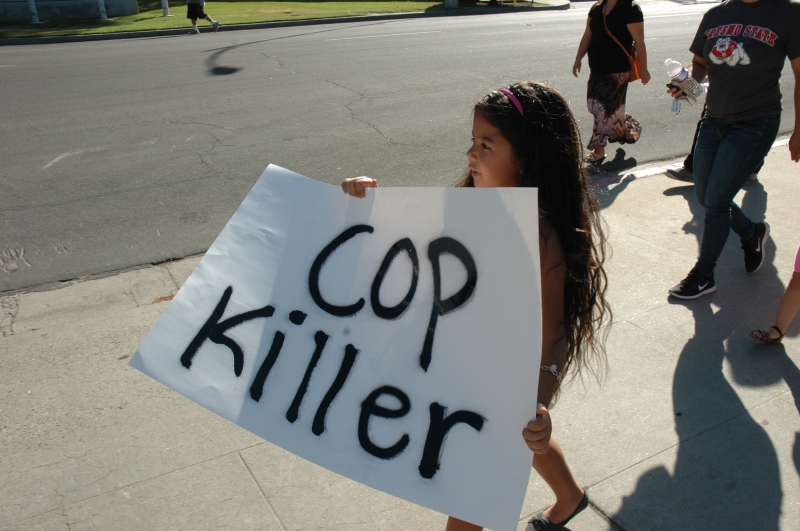 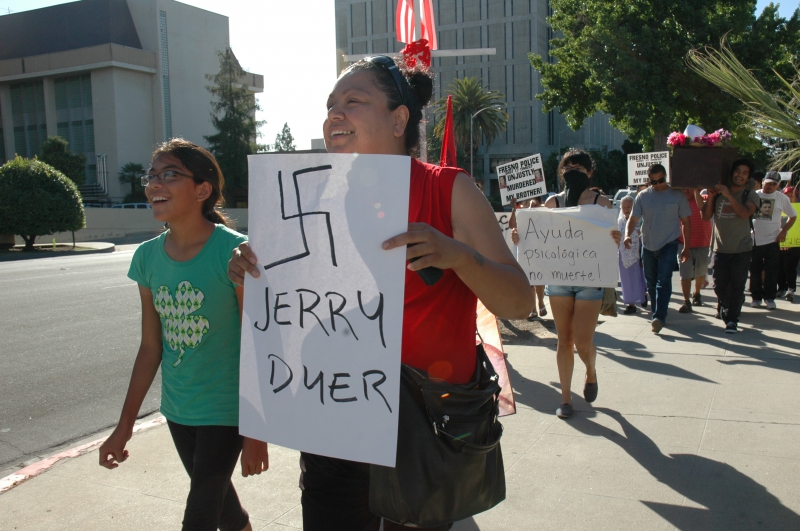 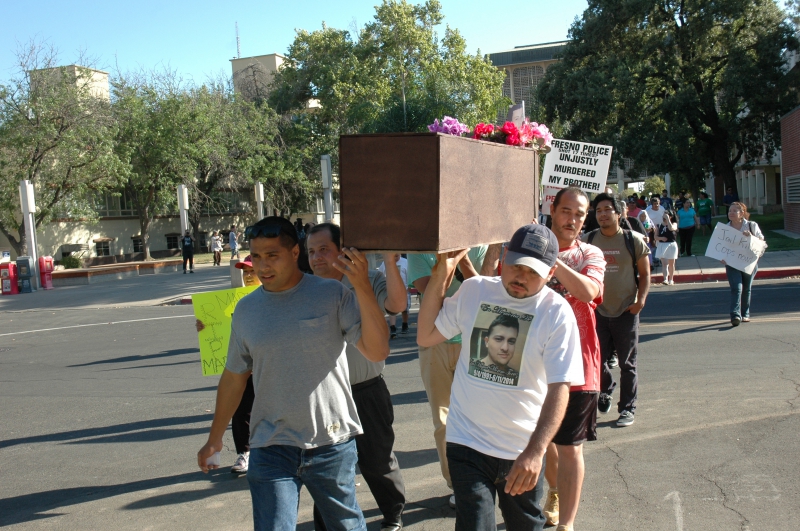 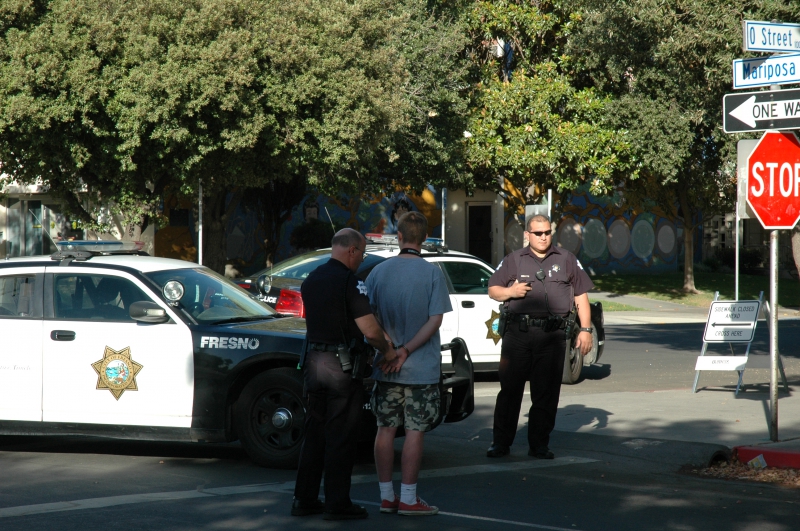 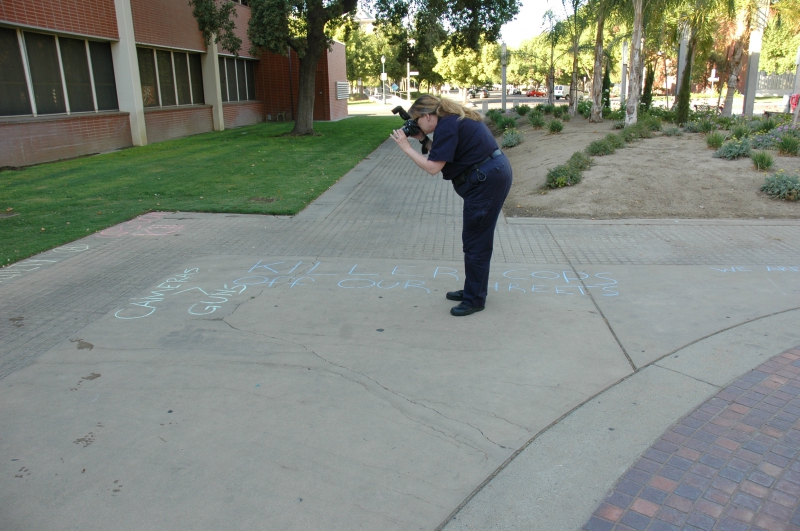