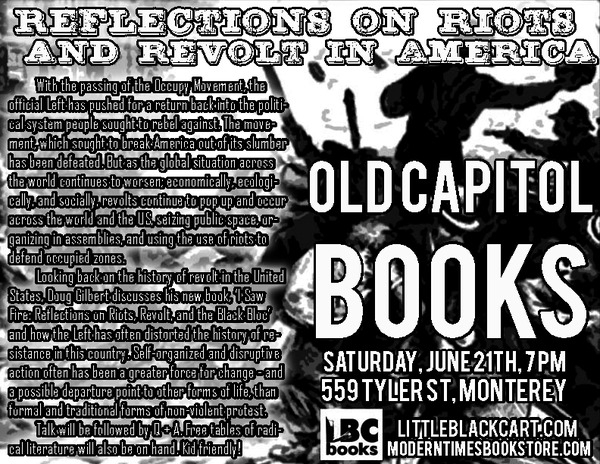 With the passing of the Occupy Movement, the official Left has pushed for a return back into the political system people sought to rebel against. The movement, which sought to break America out of its slumber has been defeated. But as the global situation across the world continues to worsen; economically, ecologically, and socially, revolts continue to pop up and occur across the world and the US, seizing public space, organizing in assemblies, and using the use of riots to defend occupied zones.

Looking back on the history of revolt in the United States, Doug Gilbert discusses his new book, ‘I Saw Fire: Reflections on Riots, Revolt, and the Black Bloc’ and how the Left has often distorted the history of resistance in this country. Self-organized and disruptive action often has been a greater force for change - and a possible departure point to other forms of life, than formal and traditional forms of non-violent protest.

Talk will be followed by Q + A. Free tables of radical literature will also be on hand. Kid friendly.
https://www.facebook.com/events/3023572299...
Add Your Comments
Support Independent Media
We are 100% volunteer and depend on your participation to sustain our efforts!