Add an Event
Newswire
Calendar
Features
Home
Donate
From the Open-Publishing Calendar
From the Open-Publishing Newswire
Indybay Feature
Related Categories: Santa Cruz Indymedia | Government & Elections | Police State & Prisons
SPD Refuses to Release Names of Shooters in Recent Officer Involved Killings
by Monterey County Police News
Wednesday Jun 11th, 2014 10:09 PM
On June 10, the Salinas Police Department and the City of Salinas, in a letter from the City Attorney, denied Freedom of Information Act requests from six local corporate news agencies seeking the names of the shooters in the recent officer involved killings of Carlos Mejia, Osman Hernandez, and Angel Ruiz that occurred on May 20, May 9, and March 20 respectively. The SPD is claiming the officers' safety would be at risk if they were to name them publicly. The SPD also refused to release any information as to whether the officers involved in the May 9 and May 20 shootings had been involved in any previous shootings. 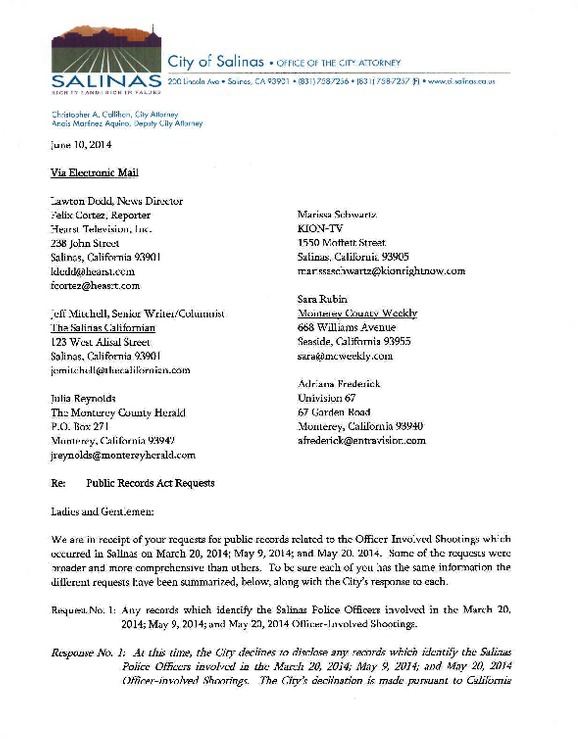 Download PDF (928.8KB)
The media requests included a request for the names of all the officers who have shot people in the last five years. According to the department, there were no officer involved shootings between 2009 and the end of 2011.

The SPD did release some information on officer involved shootings that occurred in Salinas between 2012 and 2013:

September 13, 2013 - A woman was wounded by Salinas police officer Jeff Alford, who shot her on East Market Street.

July 26, 2013 - Juan Luis Acuna was killed on Kern Street in Salinas by nine officers from several agencies, which included seven Salinas police officers, a Monterey County sheriff's deputy, and a California Highway Patrol officer. The SPD refused to release the names of any of the officers involved in this killing.
§Woman shot by Officer Jeff Alford on Sept. 13, 2013 was Charlene Hale
by Monterey County Police News
Thursday Jul 10th, 2014 2:49 PM
"In the past two years, six people have been shot by Salinas Police Department officers. One was a woman, and she was the only one who survived. Her name is Charlene Hale."

"She was shot by Officer Jeff Alford on Sept. 13, 2013 outside City Suds Laundromat on the corner of East Market and Pajaro streets." 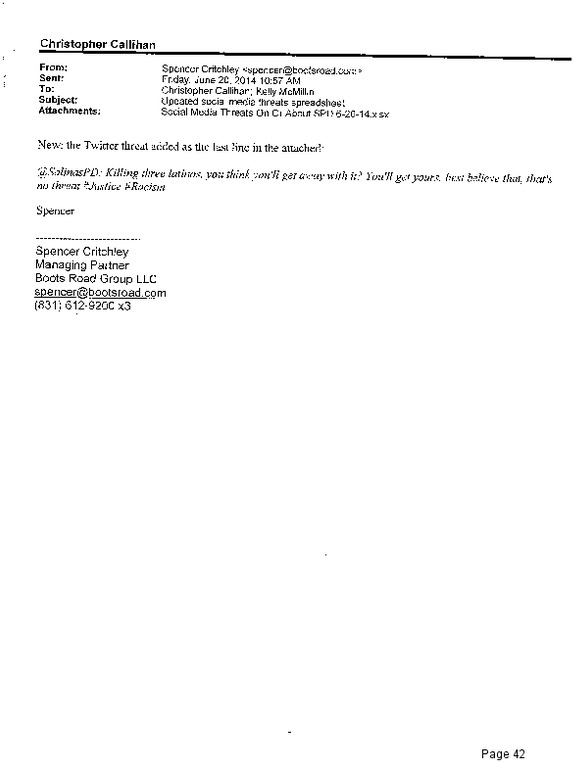 Download PDF (7.5MB)
KSBW filed a Public Records Act request for the names of the Salinas Police Officers who killed Frank Alvarado on July 10, but SPD denied the request. The department has hired an attorney who made available to KSBW their packet of communications they have received that they consider threats (see PDF).

"You may recall that we at KSBW – along with our media partners in this matter, The Californian newspaper, KION-TV and KSMS-TV, filed a California Public Records Act request for the identities of all officers involved in each shooting. This month, we also filed a CPRA request for the identity of the officer involved in the July 10th shooting. For each of these cases, our request was flatly denied. The city’s rationale: specific threats – and that word “specific” is key here - against the police officers."

"On Thursday, a Santa Ana based attorney, hired by the city to deal with our media requests - we believe to stonewall against them - released a packet of documents which purportedly are evidence of the “specific” threats against the officers. In it are pictures of graffiti, emails and more; but after reviewing them, we are hard pressed to find anything specific directed at anybody. It’s more just a collection of photos and blustery emails, colorfully worded at times, but hardly threatening."

http://www.ksbw.com/tv/editorials/editorial-police-anonymity-or-public-accountability/27157440
Add Your Comments
LATEST COMMENTS ABOUT THIS ARTICLE
Listed below are the latest comments about this post.
These comments are submitted anonymously by website visitors.