Demo at Penthouse of Google Employee and Landlord Thomas Fallows

by Counterforce (Group #11)
An amusing anecdote

From this point on he, too, will be ruthless. 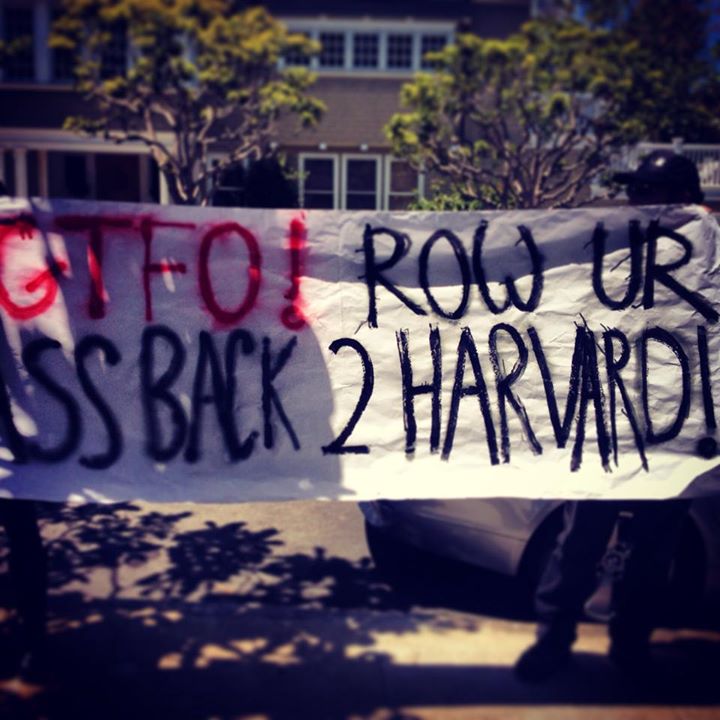 We don't know why some people need to be so rich, but we know why everyone else needs to be poor. Homelessness and unemployment exist because the economy needs these forces to exist. Without them, capitalism would lose its reserve pool of workers desperate to better their situations and work any job, however menial and degrading. As long as capitalism exists, it will always perpetuate this inequality, and we believe there is nothing further to argue about regarding these simple statements. However, we have not failed to notice the absolutely depraved, cruel, and malicious nature of the current ruling class in San Francisco. This is why we came to the home of Thomas Fallows at 2900 Pierce Street in San Francisco, California.

Thomas Fallows is a man who has used the Ellis Act to evict the occupants of four buildings filled with dozens of people and their lives. He caught our attention by not only being a Google employee but also for being a stark example of the entitled and greedy tech-entrepreneurs inhabiting San Francisco.

Thomas Fallows has been in the real-estate business since he bought his first buildings and evicted his first tenants in 2007. With these purchases, he became what Thomas Piketty refers to as a rentier, a term most commonly remembered in novels from the 1800's that refers to a class of people that profit from large and continuous rental payments made to them. According to Piketty, this class of rentiers has reemerged and is growing. In his analysis, we are returning to levels of capital concentration unseen since the international war against capitalism that lasted roughly between 1871 and 1939.

Thomas Fallows is not alone as a neo-tech-rentier. While he was planning his evictions, he was also working on the Mercantalia shopping website with his bro Jonathan Kibera Through this website, the dynamic duo sold large amounts of frivolous commodities. Fallows and Kibera love to do everything together. At Harvard they were on the rowing team together, masturbated over capitalist dreams together, and developed their pathology of greed together. Once they got to San Francisco, they used the Ellis Act to evict four buildings together and in the end, as it so often turns out, they joined Google together.

Fallows is now pushing his Google Shopping Express delivery service towards neurotic and deranged nouveau-riche techies who can barely open the door to pay for their junk food, an effort he will surely succeed at. Google Shopping Express is creating a realm of alienated consumers who cannot be bothered to interact with the local economies they invade, relying on quickly delivered commodities from Costco, Target, Staples, and Whole Foods.

Meantime, his bro Jonathan Kibera ended up a Product Manager for Google and is currently helping Fallows with the Google Shopping Express project. Together, they are building an insular and barren world of consumers, where food and luxuries are parachuted in from the great Google in the sky. Fallows and Kibera are making lots of money from this endeavor. However, the wealth and privileges these two men get from Google just aren't enough. Ever since these two purchased four buildings in 2007 and 2009, they have been supplementing their high Google incomes with rent from the wealthier occupants that moved in after the evictions.

Concurrently, the new Whole Foods on Market Street is now buzzing with commerce just as the recycling center in the Safeway across the street is set to close down, robbing the homeless population of a difficult and hazardous way to generate some income. While people push shopping carts of cans and bottles to increasingly remote recycling centers, the yuppies shuffle away inside Whole Foods, dropping four hundred dollars a week on their organic, pesticide free groceries and throwing their recyclables in the proper disposal bins.

As snake-oil economists like Marc Benioff, Eric Schmidt, Ron Conway, Marc Andreeson, and the other capitalist super-managers prattle on about technology and its liberating role in the lives of the impoverished, we shake our heads in disgust. Their miniscule charity and vast legislative ambitions aim only to extract a tiny minority of people from impoverished communities, train them to code, and hire them on at their companies, thus increasing the concentration of capital in their hands.

Billions of dollars from the tech-industry continue to saturate San Francisco, impoverishing far more people than the it will ever help, justifying itself with ever-feebler excuses and quickly disintegrating rationalizations. There is nothing any of the tech-leaders can do to stop this inequality that they themselves are perpetuating, but nevertheless, super-manager Larry Page recently told the public that "we’re excited about our new Google Shopping Express service, which is a great way to get deliveries the same day you order them." For him, the ship is still sailing, despite the water lapping at his feet.

We believe that the writing is on the wall and that these people are doomed. As the disparity increases and the inevitable revolution looms ever closer, the rich will look as absurd as they are. Thomas Fallows is no different than any other techie sterilizing San Francisco, he just also happens to be a well-paid Google employee and a predatory capitalist. He stands as a stark example of the obliviousness of greed and the banality of wealth, living as he does off dozens of past evictions. As Thomas Piketty recently wrote, “property sometimes begins with theft, and the arbitrary return on capital can easily perpetuate the initial crime.”

Capital in the Twenty-First Century offers substantial, verifiable proof that nothing is going to change and that inequality will worsen if capitalism continues on the trajectory envisioned for it by the current leaders of the capitalist world, Marc Andreesen included. In one passage of his book, Thomas Piketty explains something we see today in San Francisco: “Technology, like the market, has neither limits nor morality. The evolution of technology has certainly increased the need for human skills and competence. But it has also increased the need for buildings, homes, offices, equipment of all kinds, patents, and so on, so that in the end the total value of all these forms of nonhuman capital (real estate, business capital, industrial capital, financial capital) has increased almost as rapidly as total income from labor.”

Capital exudes an exoskeleton wherever it conquers and colonizes. Buildings rise, homes fall, populations are displaced, and the world hardens into a constellation of dead shells, replicating infinitely on a finite planet. We are going to stop this supposedly infinite expansion of capital, no matter how overwhelming our opponent may seem, no matter how desperately they try to flee the planet. Their project is not total, nor is it complete, and there is still much time to defeat it. The cracks are already appearing everywhere, we are simply pointing them out. As we have said before, the revolution that is coming will be vast, so expect no pity from it.

Thomas Piketty could not fail to notice a simple fact in the course of writing his book: “To be sure, there is something astonishing about the notion that capital yields rent, or income that the owner of capital obtains without working. There is something in this notion that is an affront to common sense that has in fact perturbed any number of civilizations, which have responded in various ways, not always benign.”

To everyone reading, we say, organize your lives and resources against capitalism and take part in the revolution. This is our moment, so please, gather together with your friends, decide what you can do to help the struggle, and act against the forces dominating not only our lives but the life of the planet itself.

Add Your Comments
Latest Comments
Listed below are the latest comments about this post.
These comments are submitted anonymously by website visitors.
TITLE
AUTHOR
DATE
@SF resident
212kelvin
Wake up San Francisco
SF Resident
Support Independent Media
We are 100% volunteer and depend on your participation to sustain our efforts!