Newswire
Calendar
Features
Home
Donate
From the Open-Publishing Calendar
From the Open-Publishing Newswire
Indybay Feature
Publish to Newswire
Add an Event
Related Categories: Santa Cruz Indymedia | Education & Student Activism | Racial Justice
March and Prayer Vigil Held in Response to Racial Bullying Incidents at UC Santa Cruz
by Alex Darocy (alex [at] alexdarocy.com)
Friday May 30th, 2014 7:52 PM
Last week, students at UC Santa Cruz reported to the NAACP that two incidents of what the organization is calling "serious racial bullying" had occurred on the university's campus. In response, the Santa Cruz Branch of the NAACP together with the UCSC Women's Center organized a "March and Prayer Vigil to Stop Hate Crimes and Racial Bullying in Our Community" on May 29. Community members, including students from UCSC, marched down Pacific Avenue and to the Town Clock where songs were sung and a prayer vigil was held. "We need to hold our institutions accountable for setting systems in place that will change behavior, re-educate their members, and protect young people from the life-long scars of hate and prejudice. Please help us to focus on racism in our community and find peaceful solutions for the future," an announcement for the vigil stated. [Top video: A montage of clips from the march and vigil, as well as words from Deborah Hill-Alston.]
Copy the code below to embed this movie into a web page:
Download Video (36.2MB) | Embed Video
Presently, the victims of the racial bullying wish to remain anonymous but Deborah Hill-Alston, the President of the Santa Cruz Branch of the NAACP, said the university is investigating the incidents and she is confident they will handle the matter properly. Hill-Alston did not want to go into the specifics, but she did say that the incidents were ongoing and had occurred recently. The incidents involved the use of improper language and threats which were made on campus to more than one student.

As marchers made their way down Pacific Avenue, group chants could be heard, which included, "Stop the Bullying, Stop the Hate," "Spread Love Not Hate," "Hey Hey, Ho Ho, Say No to Hate, Say Yes to Love," and "Honk Your Horn if You Believe in Love."

Minister Tony Howard led the group in prayer at the Louden Nelson Center, where the march began, as well as at the Town Clock. Howard has been a Minister with the Progressive Missionary Baptist Church for 22 years. The Santa Cruz NAACP has a strong connection to the church.

According to the NAACP, incidents of racial misconduct are "constantly" taking place in the wider community as well as at local schools, from kindergarten to the university. "I want my kids to be educated in a safe environment," Hill-Alston told the group at the Town Clock.

For more information about the UCSC women's Center, see:
http://womenscenter.ucsc.edu/ 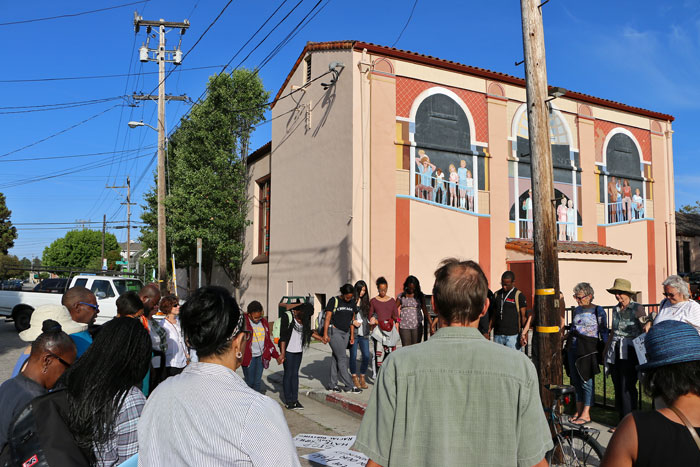 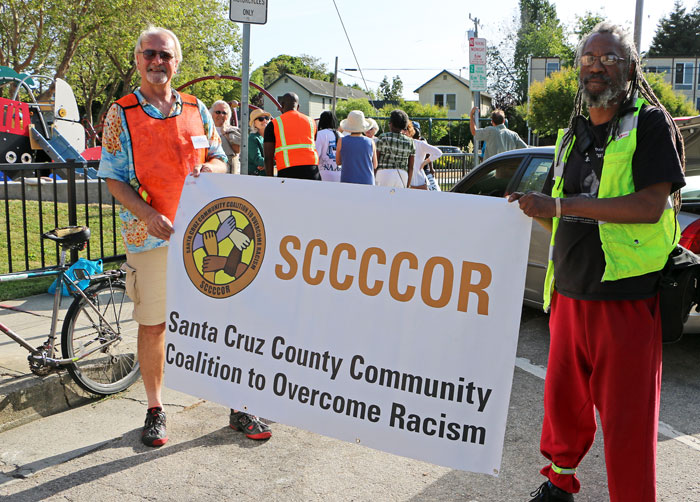 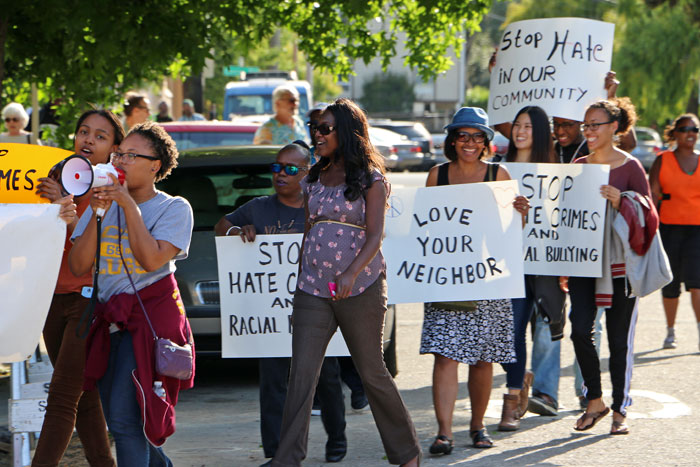 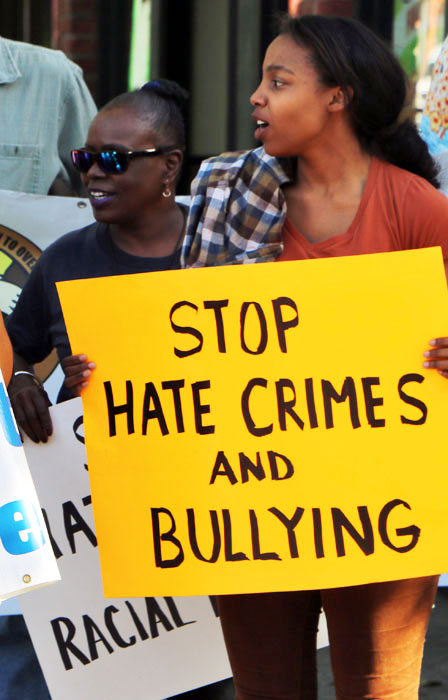 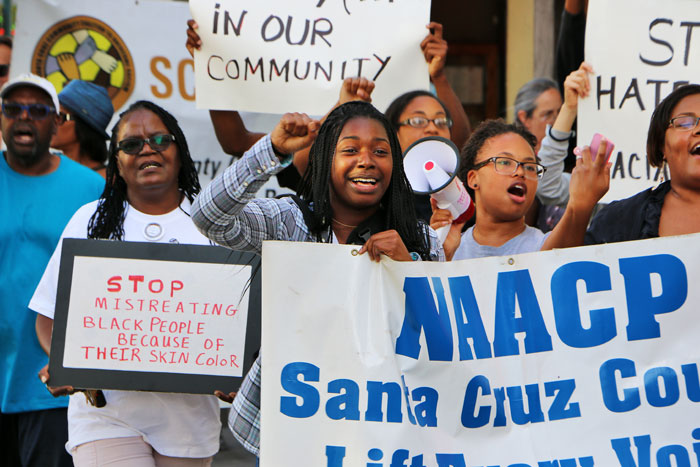 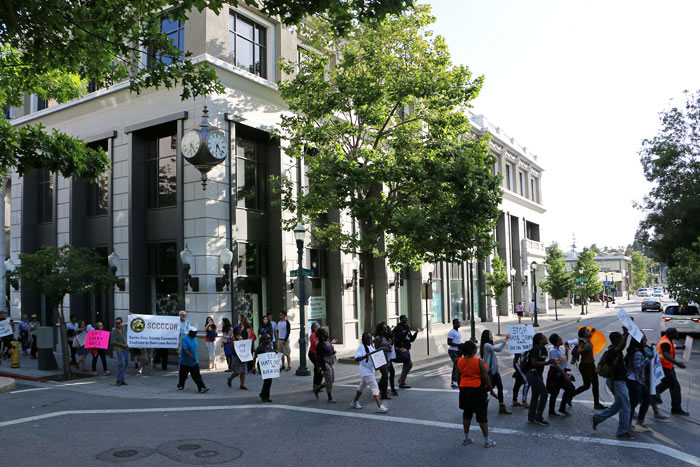 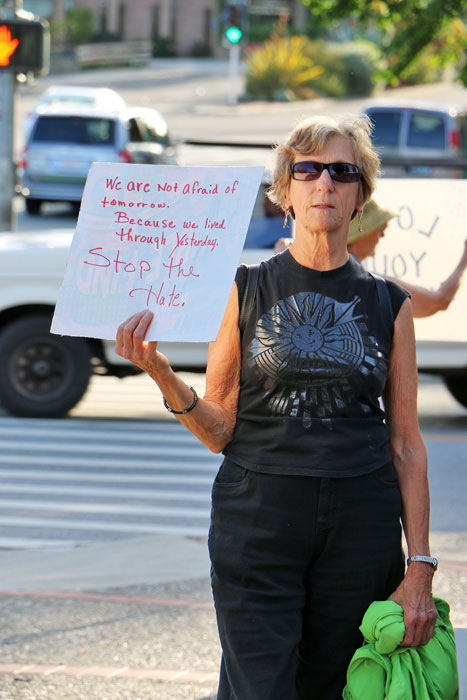 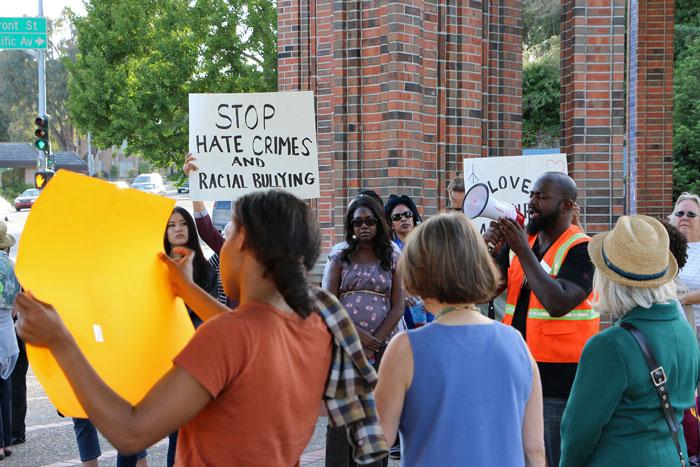 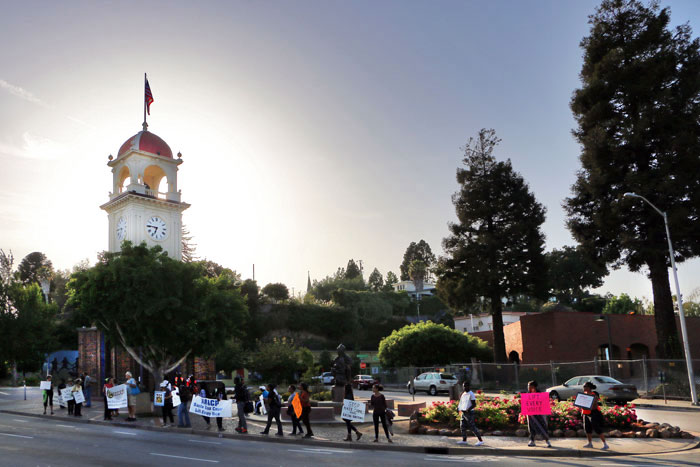 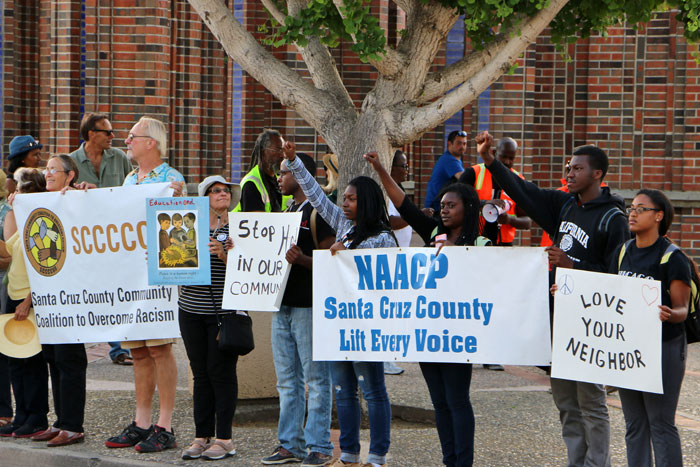 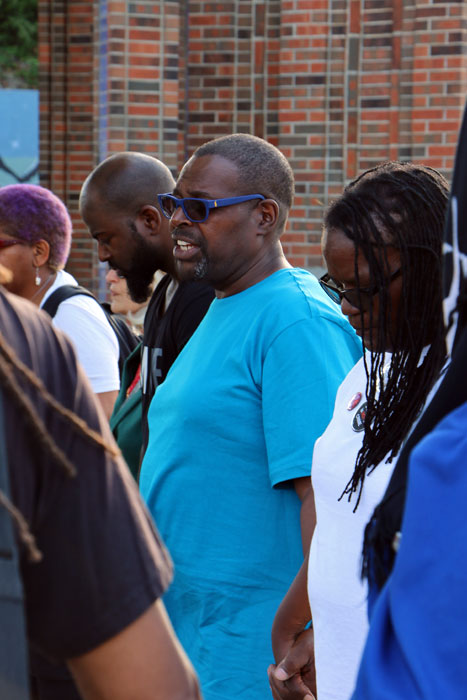 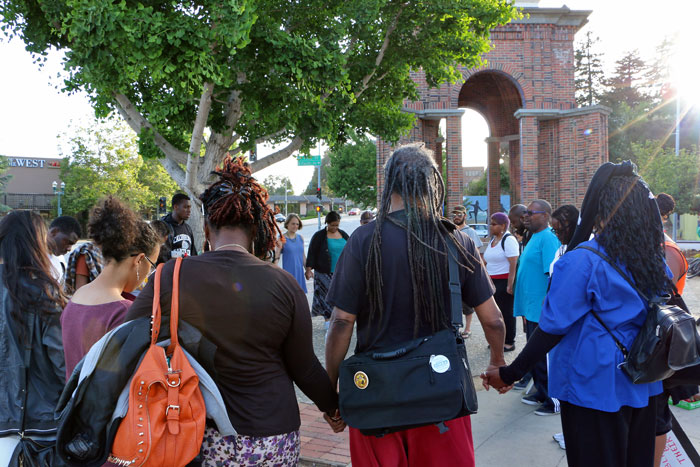 §Deacon Reggie leads a rendition of "This Little Light of Mine"
by Alex Darocy Friday May 30th, 2014 7:52 PM
Copy the code below to embed this movie into a web page:
Download Video (40.0MB) | Embed Video
Add Your Comments
Support Independent Media