Add an Event
Newswire
Calendar
Features
Home
Donate
From the Open-Publishing Calendar
From the Open-Publishing Newswire
Indybay Feature
Publish to Newswire
Add an Event
Related Categories: California | Central Valley | Santa Cruz Indymedia | Environment & Forest Defense | Government & Elections | Health, Housing & Public Services
Fracking moratorium bill defeated by oil industry lobby
by Dan Bacher
Thursday May 29th, 2014 7:10 PM
The statewide coalition Californians Against Fracking said, "Despite polls showing a majority of Californians in favor of banning fracking, today the California Senate failed to pass SB 1132 to place a moratorium on fracking. The vote is disappointing, but not completely unexpected given that the oil industry has spent a whopping $15 million on lobbying activities to defeat the bill and buy influence in Sacramento." 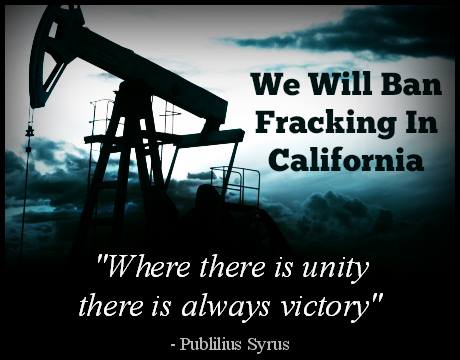 The California State Senate failed to pass SB 1132, legislation authored by Senators Holly Mitchell and Mark Leno that would have stopped hydraulic fracturing and other dangerous well stimulation methods while the state studied their risks.

The 16 no votes were Anderson, Berryhill, Cannella, Correa, Fuller, Gaines, Galgiani, Hernandez, Huff, Knight, Morrell, Nielsen, Torres, Vidak, Walters, Wyland. The 8 votes not recorded include absentions by Block, Lara, Hill, Hueso and Roth. Three Senators - Calderon, Wright and Yee - can’t and didn’t vote because they are suspended and were not present for the vote.

The defeat of the legislation was undoubtedly due to the huge amounts of money dumped into lobbying the Legislature by the Western States Petroleum Association (WSPA), the largest and most powerful corporate lobbying group in Sacramento, and oil companies.

The statewide coalition Californians Against Fracking issued the following statement:

“Despite polls showing a majority of Californians in favor of banning fracking, today the California Senate failed to pass SB 1132 to place a moratorium on fracking. The vote is disappointing but not completely unexpected given that the oil industry has spent a whopping $15 million on lobbying activities to defeat the bill and buy influence in Sacramento.

State lawmakers will continue to face growing concern about fracking pollution from voters in their communities. Californians Against Fracking calls on Governor Brown to protect California's water, agriculture, public health and climate by declaring a moratorium on fracking now. If Governor Brown is serious about fighting climate change and its severe impacts, including droughts and fires, then he must show real leadership and stop the fracking now.”

The statement was issued on behalf of Californians Against Fracking, 350.org, Center for Biological Diversity, Center on Race, Poverty and the Environment, CREDO Action, Environment California, Food & Water Watch and Oil Change International.

As the Friday deadline for moving legislation from California’s Senate to the Assembly approaches, Senator Holly J. Mitchell’s bill to set a moratorium on fracking for oil in the state still needed three votes to pass when the Senate recessed Wednesday night, according to a statement from Senator Mitchell's Office.

Mitchell said the SB 1132 elicited "spirited floor debate" before the failure of several senators to vote on the bill left it without the 21 votes needed to advance to the Assembly. Although a motion for reconsideration allows Mitchell to bring the bill up for vote again, unless at least three senators cast favorable votes by Friday, the bill dies for the current legislative session.

“Last year our efforts to enact a moratorium got as far as an Assembly committee, and this year to the floor of the Senate, with more ‘yes’ than ‘no’ votes,” noted Senator Mitchell (D-Los Angeles), who carried a similar bill, AB 1323, while serving in the Assembly. “We have the momentum, this issue’s gone viral nationally, and it’s just a matter of time before the dangers of fracking prompt people to put it on pause until its safety can be established.”

“When the impacts on the public of a for-profit endeavor are unknown, we try it out first in minority neighborhoods – assuming low vigilance and the need to bring in jobs makes safety irrelevant,” said the Senator. “But we’ve put big industry on notice: That ploy won’t fly forever. People’s neighborhoods aren’t fodder for fracking, environmental justice must come, and one day soon the vote to refrain from polluting for profit will prevail!”

Catherine Reheis-Boyd, President of the Western States Petroleum Association, celebrated the defeat of SB 1132, by stating, "With SB 1132 behind us, let’s now focus on SB 4 implementation." (https://www.wspa.org/blog/post/sb-1132-behind-us-let’s-now-focus-sb-4-implementation)

"Today’s defeat of Senate Bill 1132, legislation that would have imposed a moratorium on hydraulic fracturing and other well stimulation technologies, clears a path for a concerted and collaborative effort to fully implement new statewide regulations embodied in Senate Bill 4," she said.

"The SB 4 regulations put into place a robust set of monitoring, disclosure, testing, land use and research requirements that ensure hydraulic fracturing in California is conducted safely and without harm to the environment. But there is still much to be done to finalize these new regulations and the petroleum industry is going to be a constructive partner in getting them accomplished," Reheis-Boyd claimed.

The oil industry is most powerful corporate lobby in California. A ground breaking report released on April 1, 2014 by the ACCE Institute and Common Cause reveals that Big Oil's combined spending on lobbying and political campaigns in Sacramento amounts to a stunning $266.9 million over the past 15 years. This massive spending enables the oil industry to effectively buy the votes of many State Assembly Members and Senators. (http://www.counterpunch.org/2014/04/14/how-big-oil-bought-sacramento/)

But the oil industry exerts its influence not just through spending enormous sums on lobbying and contributions to political campaigns, but by serving on state and federal government panels.

In one of the biggest conflicts of interest in California environmental history, Catherine Reheis-Boyd, President of the Western States Petroleum Association, served as the Chair of the Marine Life Protection Act (MLPA) Initiative Task Force to create so-called "marine protected areas" in Southern California, as well as sitting on the task forces for the Central Coast, North Central Coast and North Coast.

It is no surprise that the alleged "Yosemites of the Sea" created under Reheis-Boyd's "leadership" fail to protect the ocean from fracking, oil drilling, pollution, military testing, corporate aquaculture and all human impacts on the ocean other than sustainable fishing and tribal gathering. It is also no surprise that the oil industry was fracking like crazy in Southern California ocean waters at the same time that Reheis-Boyd and MLPA Initiative advocates were greenwashing one of the most corrupt environmental processes in California history.

Unfortunately, the corporate media, much of the "alternative" media, and environmental groups opposed to fracking refuse to ever mention this huge conflict of interest in a corrupt "marine protection" process that undoubtedly helped facilitate the oil industry's fracking of California ocean waters.
Add Your Comments
Support Independent Media
We are 100% volunteer and depend on your participation to sustain our efforts!