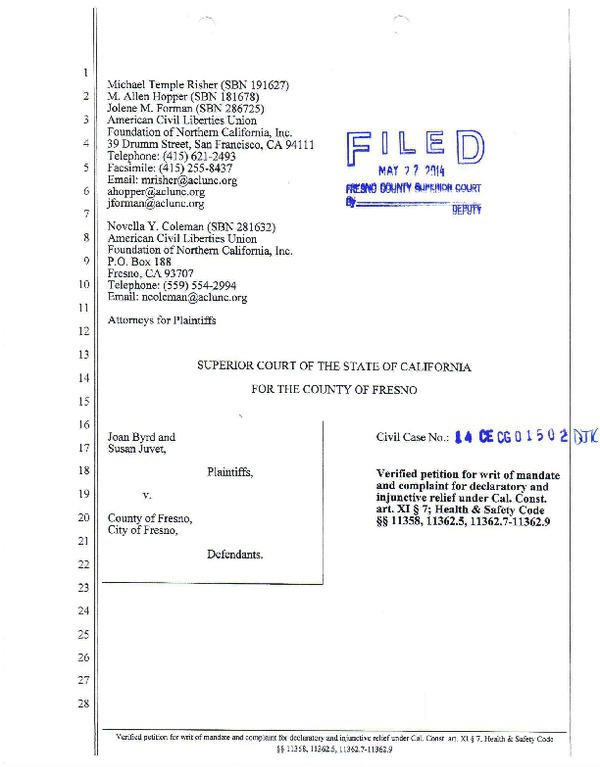 Download PDF (15.3MB)
“As a result of these bans, sick patients living in the Central Valley’s largest city have no lawful way to obtain medical marijuana locally,” said Novella Coleman, Fresno-based staff attorney for the ACLU-NC. “The bans are at odds with state law enacted by the voters of California.”

The ACLU suit charges that the Fresno ordinances are invalid because they are pre-empted by state laws. The lawsuit seeks to invalidate the bans.

In 1996, the people of California voted in favor of the Compassionate Use Act to allow seriously ill residents to cultivate and use marijuana for medical purposes without fear of fines or criminal penalties. In 2004, the California legislature expanded state protections for medical marijuana use by enacting the Medical Marijuana Program.

The ACLU is representing two Fresno residents in the suit:

Currently any Fresno residents in violation of the local ordinance can face steep fines, destruction of their medical marijuana and, for violating the County ordinance, jail time. The County ban on all cultivation of medical marijuana was enacted on January 7, 2014 and is currently in effect; the City ban was enacted on March 27, 2014 and currently prohibits new cultivation but has a 120-day grace period for existing plants.


https://www.aclunc.org/
Add Your Comments
LATEST COMMENTS ABOUT THIS ARTICLE
Listed below are the latest comments about this post.
These comments are submitted anonymously by website visitors.