by Guy T. Saperstein, Alternet
Low-flow showerheads help save much less water than people think. Most people shower once a day and use an average of 14 gallons of water. You could save more water by reducing your beef intake by one pound than by not showering for six months! 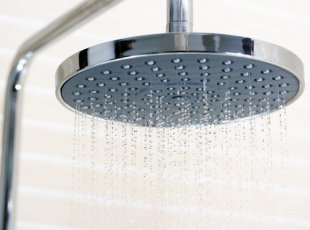 California is experiencing a serious drought and the media is filled with recommendations about how to save water: Switch to dry landscaping; don't run water when you are shaving or brushing your teeth; install low­-flow shower­heads; and don't wash your car. All those ideas would help, but much less than people think.

When I ask people to guess how much personal consumption accounts for water usage in California, people guess 20­-40%, which sounds reasonable; ­­­after all, there are 38 million people in California and they have lawns to water, teeth to brush, toilets to flush, cars to wash, and showers to take. But 20-­40% is not even close to being accurate.

Drive down I­nterstate 5 in the middle of summer in 100-plus-degree weather and you will see huge sprinklers spraying water in the middle of the day and fields being flooded­­­ in the process, losing huge amounts of water to evaporation. Very few crops and very little acreage is watered with drip irrigation in California compared to other arid regions of the world.

Not only does it take huge amounts of water to hydrate animals, it takes billions of additional gallons of fresh water to irrigate the feed for livestock, wash excrement off concrete floors, and clean blood and grease from equipment used in the butchering process. A dairy operation that uses an automatic flushing system can use 150 gallons of water per cow, per day.

Crops like corn and soybeans­­­ made cheap by government subsidies­­­ used to fatten up cattle also waste water.

And why does California grow water-­intensive crops like rice, which requires the flooding of fields, and cotton? Shouldn’t water-­hogging crops like cotton and rice be grown in the southeast United States, which has abundant water?

Most people shower once a day and use an average of 14 gallons of water. You could save more water by reducing your beef intake by one pound than by not showering for six months!

People think grass­fed beef is the ecological answer, but pasture-­raised animals require more water than factory-farmed beef because they have higher activity levels and spend more time in the sun. Grass­fed cows produce 60% to 400% more methane. (Of course, there are compelling health reasons to switch to grassfed beef, as grassfed cows are far healthier and organic beef will be free of chemicals, hormones and antibiotics.)

But none of that is the worst of the story. Agriculture uses 93% of California's water and almost half of that is devoted to growing alfalfa for shipment to the Far East, mainly China, to feed their cows. California is, in effect, shipping almost half its precious water to China.

And none of this would have been possible without the help of Democrats. The extravagant waste of California water by California agriculture is the result of cheap water, water subsidized by state and federal water projects begun more than 50 years ago.

When water is cheap­­­ and the state is willing to continue building water infrastructure like viaducts and tunnels­­­ there is little incentive for California agri­business to do anything but continue to feed California politicians. Yes, California agri­business supports Republicans too, but the Democrats get most of the big agriculture money because Democrats have delivered the water for Big Ag. Jerry Brown's father, Pat, delivered the California Water Project in 1959, and Jerry Brown supported the Peripheral Canal 30 years ago and supports the Twin Tunnels project today.

Stewart Resnick, an agri­business tycoon who owns 115,000 acres of farmland in Kern County, has funneled $4 million to politicians, mostly to Democrats, including $99,000 to Jerry Brown in 2010. Resnick has been repaid handsomely for his political donations, most notably the creation of the Kern County Water Bank, which has pumped water underground and is one reason Central Valley reservoirs were drained so low the last few years. The book How Limousine Liberals and Water Oligarchs are Hijacking Our Water, by Yasha Levine, says, "through a series of subsidiary companies... Roll International [owned by Resnick] has been able to convert California's water from a public, shared resource into a private asset that can be sold on the market to the highest bidder."

There is a saying, "Whiskey is for drinking and water is for fighting." Unfortunately, to date, the fight mostly has been about moving water from north to south at public expense. Missing in this fight is any serious discussion about how California agri­business could stop wasting California's water. As we go forward into more years of potential drought, California needs to change the conversation. We need to reassess the blame and point fingers at the real users and abusers of California water.

Guy T. Saperstein is a former civil rights attorney and past president of the Sierra Club Foundation. He is a board member of Brave New Films, Southern Utah Wilderness Alliance and the Northern Sierra Partnership.