Add an Event
Newswire
Calendar
Features
Home
Donate
From the Open-Publishing Calendar
From the Open-Publishing Newswire
Indybay Feature
Publish to Newswire
Add an Event
Related Categories: California | Santa Cruz Indymedia | U.S. | Police State & Prisons
US Congressman Cedric Richmond Introduces Bill to Reform Solitary Confinement
by press release reprinted by Angola 3 News
Thursday May 8th, 2014 2:11 PM
Below is the full text of a statement published today, May 8 2014m, at Cedric Richmond's website. A PDF of the bill itself is included as an attachment. 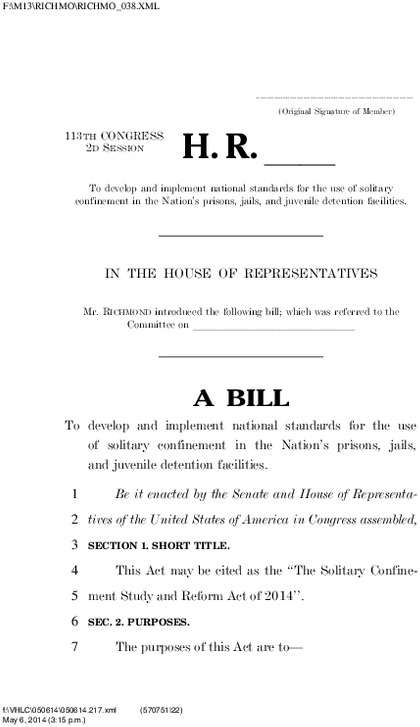 Washington DC -- Today, Rep. Richmond (LA-02) introduced a bill which would have an impact on the treatment of the United States’ prison population. This legislation would usher in significant reforms to the penal system resulting in a more humane approach to imprisonment and a more rational and fiscally conservative approach to incarceration.

The Solitary Confinement Study and Reform Act of 2014 would start a national conversation with all pertinent stakeholders about how to best develop and implement national standards for the use of solitary confinement to ensure that it is used infrequently and only under extreme circumstances.

“Our approach to solitary confinement in this country needs immediate reform. The practices imposed on prisoners, including the seriously mentally ill and juveniles, at all levels of our penal system raise significant 8th amendment concerns and it is time we have this conversation about what kind of country we are,” said Rep. Richmond. “Do we feel comfortable putting a man or woman in a dark hole for decades on end with no additional due process? Is this practice consistent with our values? I don’t think so. I know we are better than that.”

The Solitary Confinement Study and Reform Act of 2014 would:

• Introduce a more humane and constitutionally sound practice of segregated detention in the Nation’s prisons, while accelerating the development of best practices and making solitary confinement reform a top priority in each prison system at the Federal and State levels

The Solitary Confinement Study and Reform Act of 2014 is supported by Amnesty International, the American Civil Liberties Union, the International Coalition to Free the Angola 3 and the National Religious Campaign Against Torture.
http://www.angola3news.com
Add Your Comments
Support Independent Media
We are 100% volunteer and depend on your participation to sustain our efforts!