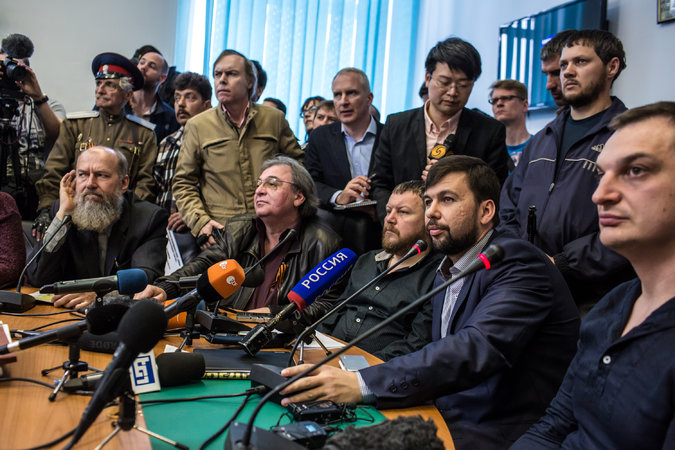 Donetsk People’s Republic and Luhansk Vow To Go Ahead With Referendum For Independence On May 11th, Despite Moscow's Disapproval

The western corporate media are purposely confused about what happened in the May 2nd Odessa Massacre. Yet, video, photos, and eyewitness accounts do make clear what happened.

This antifascist protest in Odessa, a city in south western Ukraine, was opposed to the junta that came to power in Kiev on February 22nd. At that time the elected government was overthrown and created in its place was a government that is now composed largely of open neo-Nazis of the Svoboda Party.

After anti-fascist protesters retreated to the Trades Union Building, violent neo-Nazis surrounded them and blockaded the doors, set the building on fire with Molotov cocktails, and shot, beat to death, and strangled those who tried to escape the fire and many who survived the fire after.

Junta security services did nothing to even attempt to stop the violence. In addition, they arrested 130 surviving anti-fascists and did not arrest any of the neo-Nazis who carried out the massacre. Some of those protesters were released from jail, but many others have been shipped out of the Odessa region to prisons elsewhere in Ukraine. No investigation into the massacre is being conducted by the government. There are also accounts that police participated in the violence and that some of the fascists who carried out the attack were bussed in from Kiev by the coup junta. What is certainly clear is that the authorities did not interfere with this massacre of unarmed protesters and doubly victimized the anti-facists with no attempt at justice, just additional injustice with the arrests of surviving victims after the attacks.

Here is video of the Maidan fascists making the Molotov cocktails they would use to burn unarmed protesters alive. The Maidan fascists look like they are having a picnic, and, as was the case through the entire massacre, there was no police interference.

Officially, according to the neo-Nazi infested junta of Kiev, the number of people murdered May 2nd was 46 people. Yet, independent investigation has shown this to also be a lie. Ukrainian lawmaker Vadim Savenko, who has carried out an independent investigation, says the Kiev authorities are hiding the true death toll. “According to our data, there were 116 people killed in the House of Trade Unions in Odessa,” Vadim Savenko said.

Despite clear evidence through video, photographic, and eyewitness accounts of the crimes of Maidan fascists and the complicity and impunity granted by the Kiev government, the western corporate media refuses to tell the truth of May 2nd Odessa massacre. They instead pretend those unarmed people who were murdered were terrorists from Russia and that the building started on fire by itself. This fits in with a long narrative of lies that have been fed to the western public ever since the beginning of the U.S. operation to overthrow the elected government of Ukraine with the use of neo-Nazis. For more responses to those lies, read the links to my earlier articles at the end of this article. As I wrote when this coup government came to power:

"With the U.S. sponsored overthrow of the elected government of Ukraine, the neo-Nazi Svoboda Party has been given several key posts in the new coup government. Svoboda is a party that celebrates Ukrainian Nazi collaborator and brutal mass murderer Stepan Bandera. It also claims Jewish gangsters control the media and those Jews plan to carry out genocide against Christians. Svoboda’s top leader, Oleg Tyagnibok, is calling for criminal penalties for speaking in the Russian language and stripping all ethnic Russians of their Ukrainian citizenship, forcing them to become non-citizens in their own land. In 2010 the official Svoboda internet website included in its program their desire to "physically liquidate all Russian-speaking intellectuals and all Ukrainophobes (Fast, without a trial, shot. Registering Ukrainophobes can be done here by any member of Svoboda)."

"Within the coup government Svoboda has been given the positions of Prime Minister for Economic Affairs (Oleksandr Sych), Education Minister (Serhiy Kvit), Ecology Minister (Andriy Makhnyk), Agriculture Minister (Ihor Shvaiko), and Prosecutor-General of Ukraine (Oleh Makhnitsky). Not all posts have been given to neo-Nazis. Two other rightwing capitalist parties that have no problem working closely with neo-Nazis, the Fatherland Party and UDAR, have been given the rest of posts in the coup government.

"A cofounder of Svoboda, Andriy Parubiy, has also been given the portfolio of Secretary of National Security and Defense. Make no mistake, this is a fascist given a position of command in an impending war that the capitalist state of Ukraine and its fascist thugs have begun to wage against the working class, leftists, women, Jews, and national minorities of Ukraine."

Out of self-preservation, people in Ukrainian regions with sizable Russian populations have naturally risen up against this coup government. Crimea, which was part of Russia up until the 1950s voted in their overwhelming majority to rejoin Russia. Elsewhere in the east the working class rose up and seized power. Attempts by the coup government to put down this popular revolution through the use of the Ukrainian military have ended with the Ukrainian military refusing orders to fire on their own people, some turning their weapons over and surrendering, others joining the revolution.

It was under these conditions that the Kiev government formed the National Guard, a new military unit that incorporates in neo-Nazi units. Additional neo-Nazi Right Sector Units have also attacked and murdered many eastern Ukrainians. President Obama's response to this continued violence by the Kiev government against its own people has been to support Kiev's "attempts to restore order", aid the Kiev government, blame Russia for the everything, carry out economic sanctions against Russia, and move more NATO forces closer to Ukraine.

Imperialist motivations for the U.S. and EU intervention that helped impose this coup government include their desire to impose a government willing to impose IMF / World Bank dictates, including devastating austerity and to economically isolate Russia.

In response, Russia has rightly opposed U.S. intervention in Ukraine that is aimed at isolating Russia from its regional trading partners. Yet, Russia does not speak for the people of eastern Ukraine. Their negotiations with the western powers and Kiev that brought an agreement for the people of eastern Ukraine to disarm and to end the occupation of buildings was soundly rejected by the people of eastern Ukraine. Likewise, Russia has also demanded that the Donetsk People's Republic and Luhansk not carry out a referendum on independence planned for May 11th. Both have refused and will go ahead with the vote. The ballot will be very simple, it simply asks whether they would like to become an independent republic or remain part of Ukraine. This is a ballot vote for the right to self-determination of an oppressed people and should be supported by all authentic anti-fascists and anti-imperialists everywhere.

Leninist-Trotskyists support the anti-fascist uprisings in eastern Ukraine and call for the continued building of non-sectarian self-defense militias to protect oppressed nationalities, Jews, women, unions, and opposition political parties from fascist attacks. In addition, we call for the building of Leninist-Trotskyist parties that fights to overthrow the capitalist system itself, ending IMF austerity, massive unemployment, national oppression, and other devastation capitalism has brought to Ukraine.

For more on events in Ukraine leading up to the May 2 Odessa Massacre, check out the following articles by Steven Argue:

US & EU Imperialist Hands Off Crimea, Ukraine, Belarus, & Russia!
by Steven Argue
http://boston.indymedia.org/newswire/display/219851/index.php
Add Your Comments
LATEST COMMENTS ABOUT THIS ARTICLE
Listed below are the latest comments about this post.
These comments are submitted anonymously by website visitors.