Add an Event
Newswire
Calendar
Features
Home
Donate
From the Open-Publishing Calendar
From the Open-Publishing Newswire
Indybay Feature
Publish to Newswire
Add an Event
Related Categories: Santa Cruz Indymedia | Police State & Prisons
Reports Condemn Monterey County Jail as Violent, Unconstitutional
by ACLU of Northern California
Wednesday Apr 30th, 2014 1:27 PM
San Francisco – A series of reports issued by national experts on jail conditions expose in the most graphic detail to date the Monterey County Jail as a place riddled with violence where prisoners are at serious risk of grave injury, where jail officials fail to provide prisoners with adequate medical and mental health care and where prisoners with disabilities are denied access to jail services, programs and activities.
The reports were made public on April 29 as part of a motion for class certification in a lawsuit filed last year by the American Civil Liberties Union, the law firm Rosen Bien Galvan & Grunfeld LLP and Monterey County Public Defender James Egar charging that conditions at the jail are overcrowded, dangerous, discriminatory and unconstitutional.

Four of the reports being made public today were authored by experts chosen jointly by county officials and lawyers representing the plaintiffs to investigate various aspects of the jail’s conditions.

“These reports make clear that there are serious structural and systematic problems with the jail and that conditions inside the facility do not meet constitutional and ADA standards,” said Michael Bien of Rosen, Bien Galvan & Grunfeld. “Rather than continue to waste taxpayer money litigating these issues, county officials should address them with serious and detailed remedial plans.”

According to incident reports from the Monterey County Sheriff’s Department, there were more than 150 separate incidents of violence between prisoners from January 2011 through early-September 2012, and in more than 100 of these incidents at least one prisoner required medical treatment. Violent incidents have been reported in 26 of the jail’s 29 housing units.

In one of the reports made public today, jail expert Michael Hackett says prisoner and staff safety are compromised by a jail population that “by any definition…is overcrowded.” Despite a capacity of 825 prisoners, the jail maintained an average monthly population of more than 1000 between June 2010 and September 2013 and reached a height of 1,144 prisoners in May 2013.

In a second report, expert Dr. Michael Puisis makes clear that failures by jail officials to provide prisoners with adequate medical care leaves them vulnerable to injury, unnecessary suffering and even death. Staffing shortages are so severe, Puisis reports, that numerous duties are “not performed consistently or…performed poorly, includ[ing] evaluation of health requests, chronic illness care, evaluations in sobering and isolation cells, management of patients in the [Outpatient Housing Units] and intake assessments. Segregation rounds and infection control surveillance are [simply] not performed.”

A third expert report details how jail officials systematically deny to prisoners with disabilities access to services, programs, activities and accommodations in the Jail. The Jail fails to provide sign language interpreters to prisoners who use sign language to communicate, even during the intake process, medical appointments, and disciplinary hearings. None of the areas of the Jail comply with federal and state regulations regarding accessible housing for people in wheelchairs. And prisoners who cannot walk up stairs are denied access to the outdoors, exercise and religious services when housed in areas of the jail where those programs can only be accessed by walking up a long flight of stairs.

A fourth expert selected by the plaintiffs found overwhelming systemic problems with the jail’s mental health system that place prisoners with mental illness at great risk of suffering, deterioration in their mental health condition and suicide. Among the most shocking practices is jail officials’ use of “rubber rooms,” filthy windowless cells in which they place suicidal prisoners for multiple days. These cells lack toilets, beds and sinks, and prisoners are stripped naked and forced to sit, lie and sleep on the same floor in which a grate serves as a toilet. Over the past four years, problems with jail's mental health care system contributed to all three suicides committed by prisoners.

“Too many of my clients have died by suicide or through preventable disease while housed in the Jail,” said Egar. “Enough is enough.”

The many problems in the jail are exacerbated by a failure on the part of county officials to fully invest in alternatives to incarceration that would both alleviate jail crowding and reduce the county’s recidivism rate. An inadequate program to effectively assess the necessity of locking people up while they await trial and before they are even convicted of a crime has resulted in nearly 80 percent of the jail’s population being comprised of pre-trial detainees. And the county has failed to make use of the option of allowing prisoners convicted of low-level, non-serious crimes offenders to serve a portion of their sentence under supervision in the community rather than behind bars.

“Despite profound and persistent overcrowding, county officials have not taken advantage of numerous available opportunities to safely reduce the jail population,” said Alan Schlosser, legal director of the ACLU of Northern California. “It is imperative that the county address the jail’s high pretrial population, utilize split sentencing more often and make full use of other alternatives that would reduce the need for incarceration while making the community safer by equipping people in the criminal justice system with the support they need to successfully transition back into the community and lead stable lives.”

“The conditions at Monterey County Jail – the dangerous overcrowding, the withholding of basic medical and mental health care, and accommodations for prisoners with disabilities – should not be tolerated,” said Eric Balaban, senior staff counsel with the ACLU’s National Prison Project in Washington, D.C. “Our jails and prisons must protect prisoners’ health, not sabotage it.” 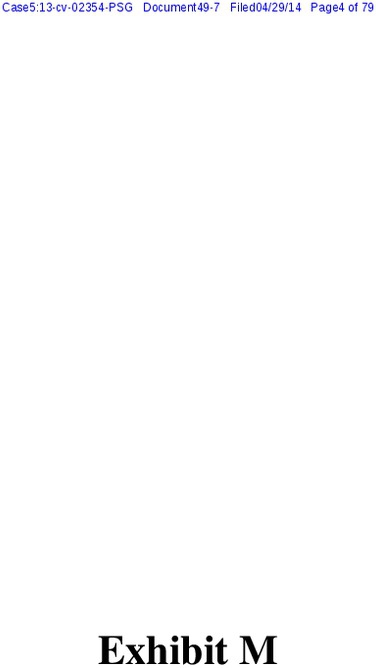 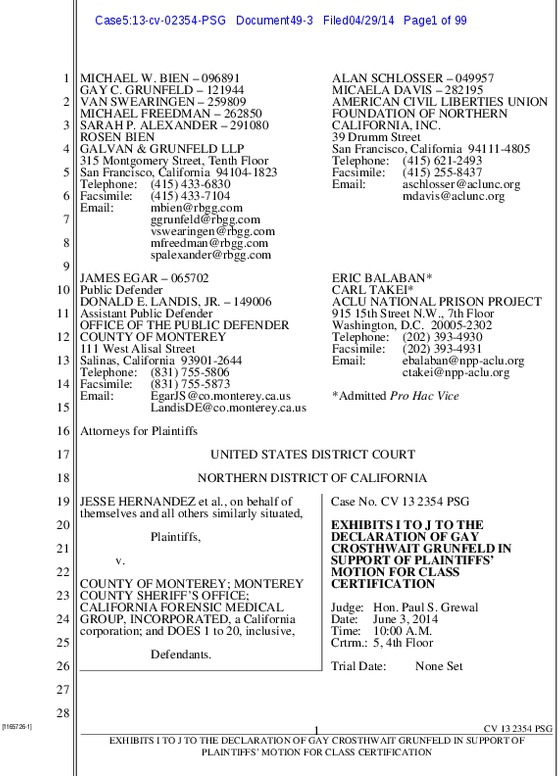 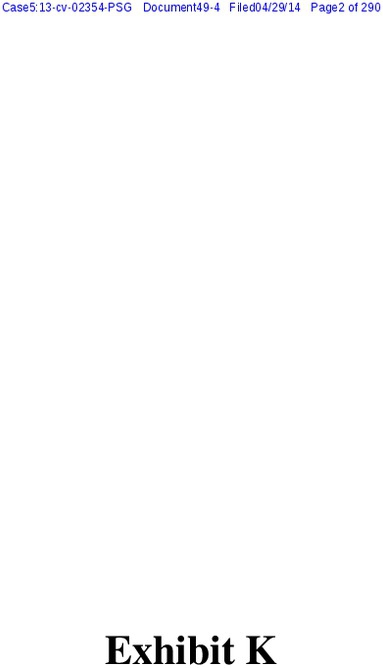 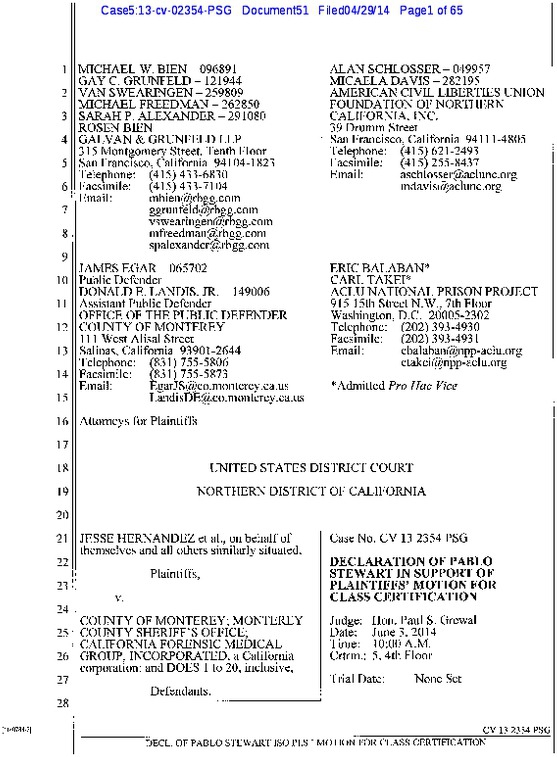 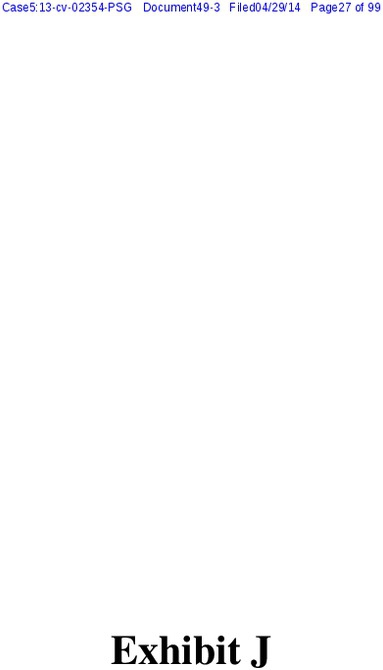 Download PDF (610.0KB)
https://www.aclunc.org/sites/default/files/49-3%20Exh.J%20%20%28Report%20on%20Medical%20Care%29.pdf
Add Your Comments
LATEST COMMENTS ABOUT THIS ARTICLE
Listed below are the latest comments about this post.
These comments are submitted anonymously by website visitors.