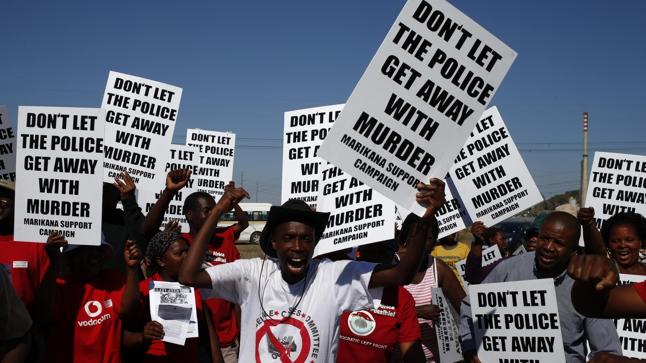 SA Labor Speaker to spotlight struggle of South Africa's workers on May Day 2014
http://www.contracostatimes.com/opinion/ci_25662006/guest-commentary-spe...
By Jack Heyman,
Oakland Tribune My Word © 2014 Bay Area News Group
POSTED: 04/29/2014 04:00:00 PM PDT
In 1990, Nelson Mandela, speaking at a mass rally at the Oakland Coliseum, lauded San Francisco longshoremen for striking a ship from South Africa to protest apartheid.
Just released from prison, Mandela recognized the union for igniting the anti-apartheid movement here. That 1984 dock action, organized by Oakland longshoremen Howard Keylor and Leo Robinson, occurred two years before Cal students erected their shantytown protesting squalid living conditions for blacks in South Africa.
Ten years later, after continuous worldwide protests, the walls of apartheid came down.
April 27 of this year marked the 20th year of Mandela's party, the African National Congress, coming to power in the first multiracial election, ending government-imposed racial separation known as apartheid. The black masses' exuberance and hope yearned for a more egalitarian society.
That train hasn't arrived. On the ANC's 100-year anniversary in August 2012, police killed 44 striking mineworkers. Sharp criticism was directed at the ANC and allies of the South African Communist Party and the Congress of South African Trade Unions.
A glimpse of this pervasive social discontent was seen at Mandela's funeral when ANC President Jacob Zuma was roundly booed.
South Africa has earned the imprimatur of protest capital of the world. In one 90-day period, about 3,000 demonstrations and strikes of more than a million people protested a 25 percent unemployment rate (50 percent for youth), wretched housing conditions, and the lack of basic services like water and electricity.
The watershed protest was the bloody platinum miners' strike two years ago -- the Marikana Massacre. A government inquiry spotlighted blatant corruption personified in Cyril Ramaphosa, the former head of the mineworkers' union during the apartheid years, now a big shareholder of Lonmin, owner of the Marikana mine.
One of the wealthiest men in South Africa, he was elected ANC deputy president after he directed police to end the "criminal" strike.
In this context, the largest and most militant union, the National Metalworkers Union of South Africa, has broken with the ANC and, in a historic decision, proclaimed no support in the upcoming elections to any party.
Instead, NUMSA has issued a clarion call for building a workers party and united front to eradicate the social ills caused by austerity, deregulation, privatization and strike breaking.
How could this take place? During anti-apartheid protests in the 1980s and 1990s, the leadership of the governing National Party saw the writing on the wall. A transition was negotiated in secret meetings in London between the National Party and ANC heads, like Thabo Mbeki, a self-declared Thatcherite. Whites would cede political power but maintain control of the commanding heights of the capitalist economy, mining and finance.
The ANC agreed to renounce a central component of its Freedom Charter: "The mineral wealth beneath the soil, the banks and monopoly industry shall be transferred to the ownership of the people as a whole; All other industry and trade shall be controlled to assist the well-being of the people."
The Faustian Compromise was completed.
The Metalworkers' call for a workers party to lead the struggle to implement the Freedom Charter and beyond may resonate amid the discontented working class and shack dwellers and change the political landscape in South Africa permanently.
The longshore union honors May Day by hosting Mphumzi Maqungo, international officer of NUMSA, speaking about the dynamic developments in South Africa today.
He will speak at 7 p.m. Thursday at ILWU Local 10; 400 North Point St., San Francisco; Noon on Friday UC Berkeley, McCone Hall; 2 p.m. Saturday at Black Repertory Theater; 3201 Adeline, Berkeley.
All working people are invited. It will also be streamed live on http://www.kpfa.org
Jack Heyman, a retired Oakland longshoreman and one of the organizers of the 1984 longshore anti-apartheid strike, chairs the Transport Workers Solidarity Committee. http://www.trensportworkers.org.
http://www.trensportworkers.org
Add Your Comments
Support Independent Media