Add an Event
Newswire
Calendar
Features
Home
Donate
From the Open-Publishing Calendar
From the Open-Publishing Newswire
Indybay Feature
Publish to Newswire
Add an Event
Related Categories: East Bay | Health, Housing & Public Services
Our Historic Post Offices Should Not Be For Sale, Period!
by JP Massar
Monday Apr 21st, 2014 2:25 PM
On Thursday, April 17th, 2014 the Federal Government's Advisory Council on Historic Preservation issued a stinging report, criticizing the United States Postal Service for the way it has dealt with (or rather, not dealt with) the issues surrounding the sale of its historic properties such as the Berkeley Post Office, and recommended to Congress that all such sales be halted until the Postal Service meet its obligations in this regard. Berkeley Post Office Defenders has issued a statement in response.

On April 17th, the Advisory Council on Historic Preservation issued its Preserving Historic Post Offices report to Congress "on compliance with Section 106 of the National Historic Preservation Act for the closure and disposal of its historic postal facilities." This report was requested by legislation initiated by Berkeley's United States Representative in Congress Barbara Lee.

The report tells us some that is new, and much that we already know from Berkeley's experience attempting to interact with Postal Service management. We are well aware that they refuse to care about the community's concerns - when they deign to listen at all (public meetings attended by hundreds of Berkeley residents in near-universal opposition to the sale of Berkeley's Post Office whose voices were totally ignored showed us that); we know that Postal Service management ignores the law when it is inconvenient to their purposes; and we know that they are hell-bent on selling Post Office assets in pursuit of immediate revenue, all as the report suggests.

We also know from other sources such as Peter Byrne's investigative reporting that Postal Service management has allowed its real estate agent, CBRE, to engage in unethical and possibly illegal practices as it sells off Historic Post Offices in violation of procedures it has sworn to abide by; it has allowed CBRE to act as both appraiser, buyer's agent and seller's agent; and has stood by as CBRE has sold properties for below market value to its board members' cronies.

What we gleaned from the report that we didn't know before is telling but therefore not surprising:

All of these observations are important, but the most crucial part of the Report is its second recommendation:

The USPS should suspend any further actions to relocate services out of historic postal facilities and dispose of those historic facilities until such time as it fully implements the recommendations of this report. If the USPS fails to suspend such actions, the ACHP recommends that Congress direct the USPS to suspend all relocation of service decisions and disposal actions for postal facilities that are listed or eligible for listing on the National Register of Historic Places until such time as the USPS fully implements the recommendations of this report directed to it.

Berkeley Post Office Defenders enthusiastically endorses this recommendation while stating the obvious: it does not go far enough.

OUR HISTORIC POST OFFICES SHOULD NOT BE FOR SALE, PERIOD!

These buildings belong to the people of the United States; our grandparents and great-grandparents labored to build them and also paid for them with their tax dollars. As such they must remain as the property of the United States, in common for the benefit of us all. It is criminal to privatize them for any reason, let alone for a quick cash fix and to the benefit of one-percent real estate moguls.

Killing the Post Office on the Altar of Privatization: Our Commons on the Auction Block.

Not Only Are They Selling Off our Post Offices - They're Union Busting to Boot! Berkeley Post Office Defenders (and, oh yeah, Congress) Tell the Postal Service: Stop the Sales! 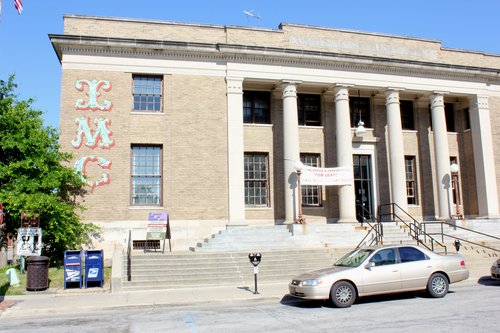 Proof that there is a solution. The Urbana IMC bought the historic building and rented a portion of it back to the Post Office. The rest is the "Independent Media Center" ucimc.org Unfortunately, Indymedia is not their highest priority, But here is a possible solution to your problem.

http://localwiki.net/cu/Urbana-Champaign_Independent_Media_Center
https://facebook.com/IndyRadio
Add a Comment
Support Independent Media
We are 100% volunteer and depend on your participation to sustain our efforts!