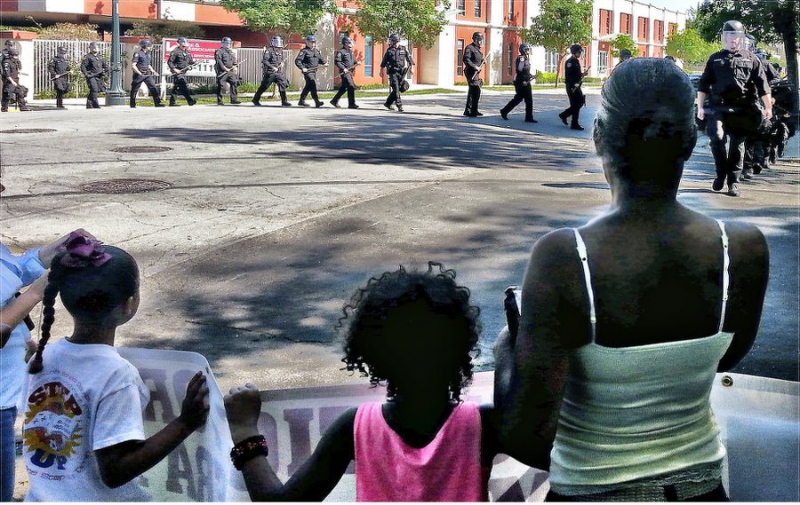 original image (900x569)
Other families came to talk about their children, including the Haynes family. Donald Ray Haynes was killed by the Stockton police this past Feb. 9. His father, Donald Haynes, is still trying to get simple answers like: “Why was the dash cam not working? Why was the storage camera [in the storage yard where he was killed] turned inwards instead of on the street like it usually is?”

Haynes stated: “The way the two cars were sitting, one of them should have been working. They won’t release it [the tape], claiming it wasn’t working.”

After the speakout and before eating, people tried to leave the barbecue for a peaceful march to the police station and back, with young children holding a banner in the lead. A whole troop of police in riot gear came from out of nowhere, blocking any exit from the park from any side. After several attempts to get around them, people came back to eat the food, with the police still surrounding the park.

After everyone ate, the youth decided to try marching again. The police came right back and kettled everyone again. Then the youth started faking out the police directionally and found a hole in the police perimeter to get through. The march took off with the cops in hot pursuit. The police eventually chased everyone back to the park. But the youth kept playing cat and mouse with police, until the cops on foot got tired of running in their riot gear and brought out the motorcycle police.

After everyone left, the cops sent a story to the press saying that two youths caused a motorcycle cop to tip over, with the bike falling on his leg. They arrested two 19-year-olds for supposedly causing this. This didn’t have anything to do with the march or barbecue, but the police are trying to tie this to this event.

Article copyright 1995-2014 Workers World. Verbatim copying and distribution is permitted in any medium without royalty provided this notice is preserved.


http://www.workers.org/
Add Your Comments
LATEST COMMENTS ABOUT THIS ARTICLE
Listed below are the latest comments about this post.
These comments are submitted anonymously by website visitors.