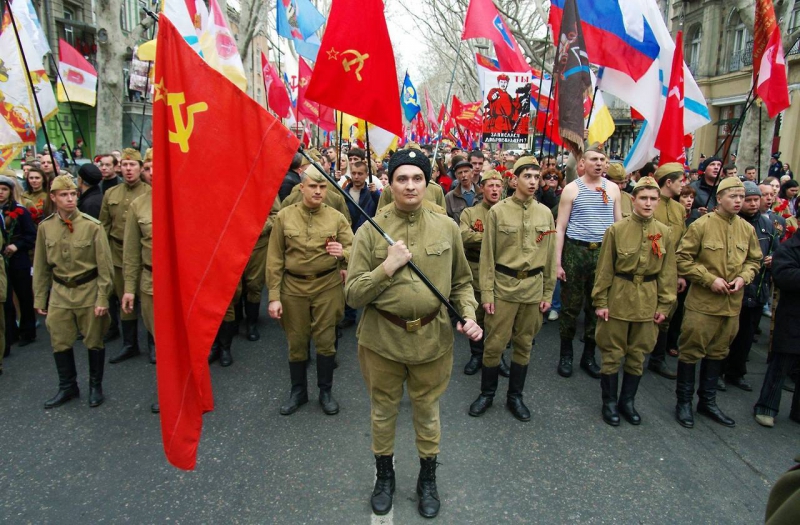 [Photo: Anti-coup protesters celebrating the defeat of the Nazis in World War II on April 10, in Odessa, Ukraine.]

On Thursday the Russian Federation, U.S., EU, and the U.S. imposed coup government of Kiev agreed on terms for the surrender of the anti-coup uprising in eastern Ukraine. The agreement between these powers demands the workers of eastern Ukraine to lay down their arms and abandon seized buildings. Supposedly representing the working class of eastern Ukraine was the Russian capitalist state, with Russian Foreign Minister Sergey Lavrov speaking for Russia.

Denis Pushilin, head of the Donetsk People's Republic, responded to this absurdity saying, "Lavrov did not sign anything for us, he signed on behalf of the Russian Federation."

Despite the lies in the corporate media of Russian intervention, fact is, what is happening in eastern Ukraine is a working class uprising against the pro-IMF and chauvinistic coup that overthrew the elected government of Ukraine in February. This working class uprising in eastern Ukraine has seized at least 10 cities. It has also won soldiers to their side that were sent to crush the uprising. Despite western hopes, it is also not surrendering, despite what Moscow says.

Of the forged flyer, the rabbi of nearby Dnipropetrovsk, Shmuel Kaminezki, says, "It's important for everyone to know its not true."

The masked men who circulated this forgery were obviously supporters of the neo-Nazi infested government in Kiev, passing out a forged document in an attempt to discredit the anti-fascist uprising in eastern Ukraine.

The fact that this forgery is being circulated as a legitimate anti-Semitic attack by the Donetsk People's Republic in the western corporate media should come as no surprise. They are lying about everything that happens in Ukraine in order to justify the Kiev government's war on its own people and to justify a potential war by NATO in Ukraine that could turn into a regional conflagration. We should remember the kinds of propaganda always spewed by the corporate media in times like these, lie after lie like "weapons of mass destruction" in Iraq, babies supposedly taken out of baby incubators to die in Kuwait, the faked Gulf of Tonkin Incident in the U.S. War on Vietnam, and chemical weapons supposedly used by the Syrian government, to name just a few lies spewed in the corporate media used to "justify" U.S. imperialist wars. This latest slander of the Donetsk People's Republic should be seen in that light.

Now that some mainstream news reports are starting to recognize this letter as a forgery, another lie is being sent out. Some reports are making it appear that this is a kind of a tit for tat in a situation where both sides in the conflict are falsely accusing each other of being neo-Nazis. Fact is, this uprising in eastern Ukraine is legitimately concerned that actual neo-Nazis have taken key posts in the new government that call for mass executions of Ukrainian Russians without trial as well as taking away their language rights and citizenship.

With the U.S. sponsored overthrow of the elected government of Ukraine, the neo-Nazi Svoboda Party has been given several key posts in the new coup government. Svoboda is a party that celebrates Ukrainian Nazi collaborator and brutal mass murderer Stepan Bandera. It also claims Jewish gangsters control the media and those Jews plan to carry out genocide against Christians. Svoboda’s top leader, Oleg Tyagnibok, is calling for criminal penalties for speaking in the Russian language and stripping all ethnic Russians of their Ukrainian citizenship, forcing them to become non-citizens in their own land.

Within the coup government Svoboda has been given the positions of Prime Minister for Economic Affairs (Oleksandr Sych), Education Minister (Serhiy Kvit), Ecology Minister (Andriy Makhnyk), Agriculture Minister (Ihor Shvaiko), and Prosecutor-General of Ukraine (Oleh Makhnitsky). Not all posts have been given to neo-Nazis. Two other rightwing capitalist parties that have no problem working closely with neo-Nazis, the Fatherland Party and UDAR, have been given the rest of posts in the coup government.

A cofounder of Svoboda, Andriy Parubiy, has also been given the portfolio of Secretary of National Security and Defense. Make no mistake, this is a fascist given a position of command in an impending war that the capitalist state of Ukraine and its fascist thugs have begun to wage against the working class, leftists, women, Jews, and national minorities of Ukraine.

For more on Ukraine, Russia, and Belarus, check out my other articles:

US & EU Imperialist Hands Off Crimea, Ukraine, Belarus, & Russia!
by Steven Argue
http://boston.indymedia.org/newswire/display/219851/index.php
Add Your Comments
Support Independent Media
We are 100% volunteer and depend on your participation to sustain our efforts!