Add an Event
Newswire
Calendar
Features
Home
Donate
From the Open-Publishing Calendar
From the Open-Publishing Newswire
Indybay Feature
Publish to Newswire
Add an Event
Related Categories: California | Central Valley | Environment & Forest Defense | Government & Elections
Brown’s Bay Delta Conservation Plan Lacks Answers
by Dan Bacher
Tuesday Apr 15th, 2014 3:04 PM
Bill Jennings, executive director, California Sportfishing Protection Alliance (CSPA), said, “If they cannot explain in the implementation agreement how the 40,000 pages of fantasy in the BDCP and the EIR are going to be implemented or financed, then how can the public be expected to comment effectively by June 13, 2014, or any date for that matter?” 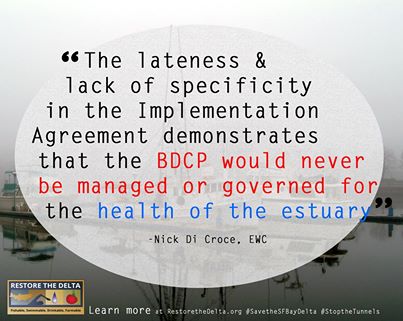 "With just 60 days remaining for public examination and comment, the parties involved in the creation, planning and implementation of the Bay Delta Conservation Plan (BDCP) have failed to reveal a binding Implementation Agreement (IA) showing how the Delta tunnels project will be financed, built or operated," according to a news release from Restore the Delta, the California Sportfishing Protection Alliance and the Environmental Water Caucus.

The groups said the "continuing failure" to file the agreement without specificity and detail highlights the unwillingness of water exporters to document a commitment to funding construction and mitigation costs for the proposed Delta tunnels project. Specific financing information for the Bay Delta Conservation Plan has not been included in the 40,000 page BDPC Plan and corresponding EIR.

“State and Federal Water Contractors have refused to make binding commitments to ensure species recovery nor have they agreed on how to finance or operate the tunnels project that has only been 10% designed,” said Restore the Delta (RTD) Executive Director Barbara Barrigan-Parrilla. “The cost of this project has ballooned so high that many of the water exporters are already backing away from paying their share of costs. We hope that when the governor and water exporters finally see the real BDCP cost numbers, they will join us in advocating for more reasonable alternatives.”

Bill Jennings, executive director, California Sportfishing Protection Alliance (CSPA), said, “If they cannot explain in the implementation agreement how the 40,000 pages of fantasy in the BDCP and the EIR are going to be implemented or financed, then how can the public be expected to comment effectively by June 13, 2014, or any date for that matter?”

“What the current drought crisis shows us is that all rules and laws protecting the Delta, which had been created to deal with standards for dry conditions, are subject to rollback, even when the cause behind the crisis is mismanagement,” said Nick di Croce of the Environmental Water Caucus (EWC). “The lateness and lack of specificity in the Implementation Agreement demonstrates that the BDCP would never be managed or governed for the health of the estuary. It would be operated to drain every last drop out of the system to send to Westlands and the Kern County Water Agency.”

According to the announcement from Friends of the River, "It is imperative that public interest organizations, public agencies, and California citizens, taxpayers and ratepayers have access to comments made as they come in to assist them in spotting issues and formulating their own comments on the 40,000 pages of advocacy--the Plan and draft EIR/EIS-- touting the BDCP Water Tunnels."
Add Your Comments
LATEST COMMENTS ABOUT THIS ARTICLE
Listed below are the latest comments about this post.
These comments are submitted anonymously by website visitors.