by Dan Bacher
"A moratorium on fracking is a crucial and necessary measure towards protecting California's water and family farmers,” said Adam Scow, California Director of Food and Water Watch. “We applaud the Senate Committee's passage of SB 1132 to stop the oil industry's irresponsible and harmful pollution of our water, air, and soil."

Photo of packed hearing room at the State Capitol as the Senate Committee discussed Senate Bill 1132. Photo courtesy of Californians Against Fracking. 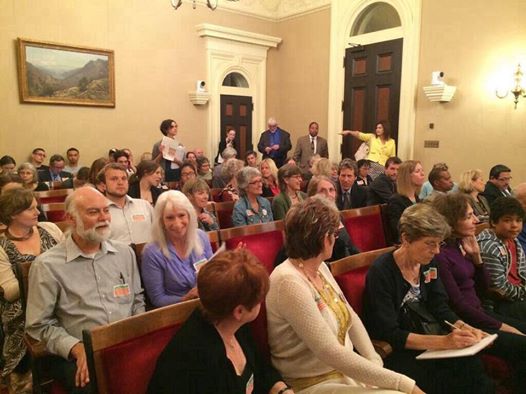 The California Senate Committee on Natural Resources and Water on April 8 passed SB 1132, legislation that will place a moratorium on fracking (hydraulic fracturing) and well stimulation until the state fully studies the impact of the oil extraction on California's air and water quality, public health and economy.

The bill, authored by Senator Holly Mitchell and Senator Mark Leno, will next be considered by the Senate Environmental Quality Committee on April 30, 2014.

The legislation, approved by a 5 to 2 vote as anti-fracking activists packed the State Capitol hearing room, would expand the current study focused on the environmental and public health effects of fracking to include the economic costs and harms, effects on private property and land use, and risks to worker safety, according to a statement from a coalition of groups.

The Committee vote took place as California reels from a big drought and Governor Jerry Brown continues to support the expansion of fracking in California and the construction of the fish-killing peripheral tunnels under the Bay Delta Conservation Plan (BDCP).

“A moratorium on fracking is especially critical as California faces a severe drought with water resources at an all-time low,” said Senator Mark Leno. “We are currently allowing fracking operations to expand despite the potential consequences on our water supply, including availability and price of water, the potential for drinking water contamination and the generation of billions of barrels of polluted water.’’

“There are a million Angelenos that live within a 5-mile radius of the largest urban oil field in the country,” said Senator Holly Mitchell, whose predominantly minority district includes the Inglewood Oil Field. “In my district vulnerable neighborhoods lie adjacent to drilling operations whose practices go largely unregulated.”

A broad coalition of environmental, labor, public health, and business groups applauded the Committee’s vote, noting that the body of research around correlations between fracking and public health concerns, water pollution and increased seismic activity is “growing.”

"The bill indicates that California should take a pause on all fracking activity until the threats it presents are better understood and we can ensure the safety of our air, water and climate,” they said in a joint statement.

Food and Water Watch, the Center for Biological Diversity, the Sierra Club, CREDO Action, the Physicians for Social Responsibility and many other groups praised the passage of the bill.

"A moratorium on fracking is a crucial and necessary measure towards protecting California's water and family farmers,” said Adam Scow, California Director of Food & Water Watch. “We applaud the Senate Committee's passage of SB 1132 to stop the oil industry's irresponsible and harmful pollution of our water, air, and soil."

"Fracking and well stimulation are not California's solution to a safe secure energy future,” said Kathryn Phillips, Director, Sierra Club California. "The latest science shows that fracking and well stimulation create air pollution, water pollution and other impacts that jeopardize public health, the environment and economic sustainability. Californians have said repeatedly, in so many ways, that they want a state where they can breathe clean air and drink clean water. The committee's vote today brings us a step closer to achieving that."

"The California Senate's advancement of this moratorium legislation is a crucial step toward protecting our air and water from fracking pollution,” said Brian Nowicki, California Climate Policy Director, Center for Biological Diversity. "Fracking is a toxic technique that threatens our health, our climate, and our precious water supply. Sacramento lawmakers should move quickly to pass this bill and halt fracking before irreparable damage is done to our state."

Zack Malitz, CREDO Campaign Manager, said, "This vote is a wakeup call for Governor Brown. Every day more elected officials in California go on the record in support of a moratorium on fracking, putting enormous pressure on Governor Brown to split with Big Oil and return to the climate leadership he showed earlier in his political career."

"Physicians and other health professionals throughout California recognize the significant potential public and environmental health impacts of fracking because of increased threats posed by associated air pollution, groundwater contamination, and seismic activity,” said Robert M. Gould, President, San Francisco Bay Area Chapter, Physicians for Social Responsibility. “California should ensure that it is strongly protected against these impacts before allowing fracking to continue here."

On the other hand, Catherine Reheis-Boyd, President of the Western States Petroleum Association, the most powerful corporate lobbying group in Sacramento, is strongly opposing the legislation. She claimed that expanded fracking operations could result in up to 200,000 new jobs in the Central Valley.

"It brings the opportunity to turn around the domestic (petroleum) production from on a slight decline to stable to increase,” said Reheis-Boyd, the former chair of the Marine Life Protection Act (MLPA) Initiative Blue Ribbon Task Force to create oil industry-friendly “marine protected areas” in southern Calfornia, as quoted by KCRA TV in Sacramento. “And so the job potential -- let's say in the Central Valley -- is 200,000 jobs."

Caleen Sisk, Chief and Spiritual Leader of the Winnemem Wintu Tribe, says fracking, a form of "extreme mining" that uses large quantities of water, is closely linked with the Bay Delta Conservation Plan to build the peripheral tunnels and the federal proposal to raise Shasta Dam, since these projects will supply the water to expand fracking in Kern County and coastal area. The dam raise and tunnel plan will flood many of the Tribe's remaining sacred sites not already inundated by Shasta Dam - and will result in the extermination of wild Chinook salmon, a fish that is sacred to the Tribe.

"We call to Olebis to look down on us and send down the good blessings," said Sisk. "We call on sacred Mt. Shasta to help bless us with this sacred water, so it will continue to bring us and our children's, children and so on in to the future with good health and long life for all our relations. We are calling on the water and fire spirits to help bring back the balance in our world, as wild salmon, wolves, beavers and giant trees make their way back.

We sing to the water that flows from the sacred spring on Buliyum Puyuk (Mt. Shasta) to the ocean and back again...waters from Mauna Kea come back and answer the call and the lakes of fire send their blessings. We ask the fires inside of Mt Shasta and all the sacred fires inside the mountains of the world to help us bring understanding and balance to our way of life and change our lives to the good again.

Bring back the original taste of water to guide the people and all relatives back to healthy thinking and acting. For nothing will be here without fresh, clean, healthy WATER. No air can be produced without waters to grow the trees, the Kelp...this world was created in the most perfect functioning way…but now so much destruction and toxic waste…for mega money for a few. We pray that our words will be heard and the August Fire and Water Ceremony be good in sending our prayers up to the Creator!!!"

For those not familiar with the practice, fracking blasts massive amounts of chemical-laced water into the ground to crack rock formations in order to extract oil and natural gas, according to the Center for Biological Diversity. The process routinely employs numerous toxic chemicals, including methanol, benzene and trimethylbenzene.

Oil companies have also fracked offshore wells over 200 times in the ocean near California’s coast, from Seal Beach to the Santa Barbara Channel, according to a Freedom of Information Act Request and media investigation by the Associated Press and truthout.org last year. WSPA President Catherine Reheis-Boyd served on the MLPA Initiative Blue Ribbon Task Forces during much of the time that this fracking of our marine waters was taking place.

The Center cited two studies documenting the harm fracking poses to human health. Birth defects are more common in babies born to mothers living near fracked wells, according to a new study by researchers at the Colorado School of Public Health. In California, a recent Center report found that oil companies used 12 dangerous “air toxic” chemicals more than 300 times in the Los Angeles Basin over a period of a few months.

Besides posing a big threat to human health, the pollution to California groundwater supplies, rivers and the Delta that will result from fracking and acidization will devastate already imperiled populations of Central Valley Chinook salmon, steelhead, Delta smelt, green sturgeon and other fish species.

The Western States Petroleum Association (WSPA) spent over $4.67 million, more than any other interest group, while lobbying state government in 2013, according to data released by the Secretary State's Office and compiled by the Capitol Morning Report.

Another oil company giant, Chevron Corporation and its subsidiaries, spent $3.95 million, the third most spent by any group on lobbying state government in 2013. Chevron also spent much of its money on lobbying against bills that would ban or regulate fracking in California.

Since it is the most powerful corporate lobby in Sacramento, the oil industry is able to wield enormous influence over state and federal regulators and environmental processes. The result of this inordinate money and influence is the effective evisceration of the Marine Life Protection Act of 1999 during the MLPA Initiative process and the signing of Senator Fran Pavley's Senate Bill 4.

A report recently released by the American Lung Association revealed that the oil industry lobby spent $45.4 million in the state between January 1 2009 and June 30, 2013. The Western States Petroleum Association (WSPA) alone has spent over $20 million since 2009 to lobby legislators. (http://blog.center4tobaccopolicy.org/oil-lobbying-in-california)

For more information on oil industry power and money, go to: http://www.counterpunch.org/2013/11/08/sacramento-a-capital-awash-in-oil-money/

Related Categories: California | Central Valley | Environment & Forest Defense | Government & Elections
Add Your Comments
Latest Comments
Listed below are the latest comments about this post.
These comments are submitted anonymously by website visitors.
TITLE
AUTHOR
DATE
A wake-up call for Brown?
reader
Support Independent Media
We are 100% volunteer and depend on your participation to sustain our efforts!