Oil companies have fracked offshore wells at least 203 times over the past 20 years in the ocean near California’s coast, from Seal Beach to the Santa Barbara Channel, according to a Freedom of Information Act Request and media investigation by the Associated Press and truthout.org last year. 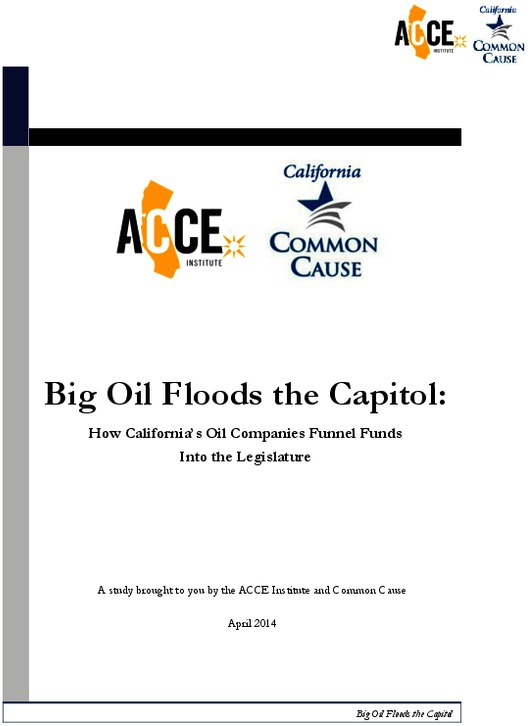 A ground breaking report released on April 1, 2014 by the ACCE Institute and Common Cause reveals that Big Oil spent $123.6 million to lobby elected officials in California over the past 15 years, an increase of over 400 percent since the 1999-2000 legislative session, when the industry spent $4.8 million.

The report, “Big Oil Floods the Capitol: How California’s Oil Companies Funnel Funds Into the Legislature,” highlights the growing influence of the Oil and Gas Lobby in Sacramento, including the increasing power of the Western States Petroleum Association (WSPA). The analysis examines the broad and expanding scope of the oil and gas industry's spending in Sacramento as the industry gears up to expand fracking (hydraulic fracturing) operations in California facilitated by the passage of Senator Fran Pavley's Senate Bill 4 last September.

The report also examines historical campaign contributions by the largest firms in the oil and gas industry. Over the last fifteen years, Big Oil has spent $143.3 million on political candidates and campaigns – nearly $10 million per year and more than any other corporate lobby.

The report also exposes how the oil and gas lobby has spent nearly $15 million to influence Sacramento lawmakers halfway through the 2014-15 legislative session. The record is $25.5 million, set in 2011-12.

As one of the few journalists willing to expose the power of the oil industry in California in recent years, I am very pleased that Common Cause and ACCE have put together this invaluable report that confirms what I’ve been saying all along – that the oil industry has overwhelmed and corrupted the political process, including hijacking what passes for “marine protection” and “environmental protection” in California.

The report was unveiled as the arrests of three State Senators on criminal charges in recent months have put the spotlight on corruption and influence peddling at the State Capitol.

On March 29, the State Senate voted to suspend Senators Leland Yee, Ron Calderon and Rod Wright, who are being prosecuted in separate criminal cases, after Yee refused to resign. Yee was arrested on federal charges of accepting bribes and coordinating an international gun-running operation,revealed in an affidavit that read like a bizarre crime novel. (http://sacramento.cbslocal.com/2014/03/28/california-senate-votes-to-suspend-leland-yee/)

One of the three Senators, Rod Wright, received more oil industry money, $83,100, than any other legislator during the 15-year period, according to the report.

"On the heels of 3 California Senators facing separate accusations of influence peddling and unethical behavior, it has never been more important to shine a light on the money that industries like Big Oil spend to advance their agenda," said Vivian Richardson, community leader and Board Chair of ACCE, in a news release announcing the publication of the report. "We've had enough of this ‘pay to play' system in which money talks - it's time for our elected officials to listen to the people of this state, and make Big Oil pay their fair share."

"This report highlights a growing problem in Sacramento – the millions of dollars of campaign contributions and lobby spending by special interests in Sacramento, and the possible influence that goes along with it," summed up Sarah Swanbeck, coauthor of the report and policy advocate for California Common Cause. "It is time for lawmakers to consider how these types of legal spending by special interests drown out the voice of average Californians and what legislative action can be taken to correct this imbalance."

The report explains how key members of Big Oil. including Chevron, Exxon, Aera Energy and Occidental Petroleum, are some of the largest corporations in California. "And these big corporations spend big time," Richardson and Swanbeck note.

"Companies like Chevron and Aera have gone to great lengths to influence candidates and initiative campaigns in California elections," the report states.

Environmental justice and indigenous groups accuse the San Ramon based-Chevron of environmental racism, ranging from the adverse health impacts of the pollution caused by the operation of its refinery in Richmond, California to its dumping of toxic waste in indigenous communities in the the Amazon River Basin in Ecuador.

This report profiles the top recipients, as well as those legislators who are facing a vote on the Oil and Gas Extraction Tax (Senate Bill 1017) this April.

But direct contributions are not the only way Big Oil dominates politics in Sacramento – the industry also spends millions on lobbying those same politicians every year.

In the past 15 years, the price tag for these lobbyists has totaled $123.6 million. In 2013-2014 alone, the top lobbyist employer, the Western States Petroleum Association (WSPA), headed by President Catherine Reheis-Boyd, the former chair of the Marine Life Protection Act (MLPA) Initiative to create fake "marine protected areas" in Southern California, spent $4.7 million.

To make things worse, the oil lobby presence in Sacramento is growing, as evidenced by the industry's successful campaign last year to defeat all fracking bills except one, Senator Fran Pavley's Senate Bill 4, an oil industry-friendly bill that gives the green light to increased fracking in California. The legislation was opposed by the vast majority of conservation and environmental justice groups in California - but supported by the Natural Resources Defense Council, the Environmental Defense Fund and the California League of Conservation Voters until the the last minute, when they withdrew their support after amendments were added.

“So far during the 2013-2014 session, the Oil and Gas lobby has spent nearly $15 million in Sacramento,” the report revealed. "Only halfway through the session, and with expenditure rates typically increasing late in the legislative season when more bills are up for a final vote, California is on track to surpass the roughly $25.5 million spent on lobbying in the 2011-2012 legislative session.”

Similarly, the number of oil and gas industry lobbyists in Sacramento has gone from 22 lobbyist employer organizations registered with the FPPC in 1999-2000 to 32 registered sector for the current legislative session (2013-2014), according to the report.

Yet for the oil industry this money is mere chump change, the cost of doing business. Big Oil's estimated profits in 2014 to date are $24,978,007,900, based on information from the Center for American Progress.

The rise of the oil industry spending documented in the report corresponds directly with the increase in fracking in Monterey Shale deposits in Kern County, coastal areas and Southern California ocean waters – and the creation of so-called "marine protected areas" that fail to protect the ocean from fracking, oil drilling, pollution military testing and all human impacts other than fishing and gathering.

Oil companies have fracked offshore wells at least 203 times over the past 20 years in the ocean near California’s coast, from Seal Beach to the Santa Barbara Channel, according to a Freedom of Information Act Request and media investigation by the Associated Press and truthout.org last year. (http://bigstory.ap.org/article/calif-finds-more-instances-offshore-fracking) Much of the fracking took place while WSPA President Reheis-Boyd was chairing the MLPA Initiative Blue Ribbon Task Force and serving on the Central Coast, North Central Coast and North Coast Task Forces.

The Common Cause/ACCE Institute report's data and charts also make it perfectly clear that the oil industry spending on campaigns and lobbying correlates directly with the rise to power and influence by Reheis-Boyd and her service as a “marine guardian"on federal and state marine protected area panels, as revealed by the chart on page 12 of the document.

Mainstream media outlets have failed to cover one of biggest environmental scandals in California history, Reheis-Boyd’s chairing of the MLPA Initiative Blue Ribbon Task Force to create alleged "marine protected areas" in Southern California from 2009 to 2012, as well as her "service" on the Central Coast, North Central Coast and North Coast task forces from 2004 to 2012. MLPA Initiative advocates falsely portrayed the process as “open and transparent" and based on "science" when it was anything but. (http://www.counterpunch.org/2014/03/28/big-oil-lobbyist-serves-on-federal-marine-protected-areas-panel/)

The report also counteracts the attempts of state officials and corporate "environmental" NGOs to portray a false image of a “Green California” where no one single interest dominates. David Helvarg, in a recent article on the National Geographic website praising the so-called “marine protected areas" created under the privately-funded MLPA Initiative, claims:

“With its ports, the U.S. Navy, fishermen, surfers and the coastal tourism industry, marine science centers and more no single special interest can dominate ocean policy. And it is where you have single interests dictating policy in places like Louisiana with oil and gas or Florida with real-estate developers that you see coastal seas in decline,” said Helvarg. (http://newswatch.nationalgeographic.com/2014/03/21/the-ocean-comes-to-sacramento-2/)

This statement avoids addressing the fact that the oil industry is the largest corporate lobby in California, one that dominates environmental politics like no other industry does – and that California is much closer to Louisiana and Florida in its domination by corporate interests than some California politicians and corporate "environmentalists" would like to think.

As the oil industry plans the expansion of fracking under Senate Bill 4, Governor Jerry Brown is fast tracking the widely-contested Bay Delta Conservation Plan (BDCP) to build the peripheral tunnels.The proposed tunnels would divert Sacramento River water for use by corporate agribusiness interests, Southern California water privateers and oil companies expanding fracking and steam injection operations. The construction of the twin tunnels would hasten the extinction of Central Valley salmon, Delta and longfin smelt, green sturgeon and other fish species, as well as imperil salmon and steelhead populations on the Trinity and Klamath rivers.

Restore the Delta and Food and Water Watch revealed on March 4 that much of the area that the oil industry could frack for oil and natural gas in California is located in and near toxic, drainage-impaired land farmed by corporate agribusiness interests on the west side of the San Joaquin Valley. (http://www.indybay.org/newsitems/2014/03/05/18751984.php)

The same Governor promoting the peripheral tunnels and the expansion of hydraulic fracturing recently declared a drought emergency in California. A broad coalition of environmentalists, fishermen and Tribal leaders is demanding immediate halt to water-intensive fracking.

According to Oil Change International, "This drought is already devastating farmers livelihoods, causing an increased risk of wildfires, and threatening our water supplies. So why is the Governor still allowing fracking to take place? Fracking wells can consume between 2 and 10 MILLION gallons of water in their lifetime."

In spite of false claims by the mainstream media and state officials that California is a "green state" and an "environmental leader," the Golden State has become an "oilogarchy."

If you want to take action and help fight the flood of dirty energy money in California, go to: http://www.bigoilbrown.org/#take-action
Add Your Comments
Support Independent Media
We are 100% volunteer and depend on your participation to sustain our efforts!