Add an Event
Newswire
Calendar
Features
Home
Donate
From the Open-Publishing Calendar
From the Open-Publishing Newswire
Indybay Feature
Publish to Newswire
Add an Event
Related Categories: California | Santa Cruz Indymedia | Environment & Forest Defense | Government & Elections
San Benito County Residents Halfway to Signature Goal for Fracking Ban Ballot Initiative
by Alex Darocy (alex [at] alexdarocy.com)
Tuesday Apr 8th, 2014 6:20 PM
Community members in San Benito are hoping they will be the first "frontline" county in California to ban fracking and other methods of extreme oil and gas extraction. Since late March, volunteers across the county have begun collecting signatures for a fracking ban initiative they hope to have on the 2014 ballot in November. Progress is moving quickly: after only two weeks of collecting signatures, the organization San Benito Rising announced they are nearly halfway through their drive. [Top photo: Signature gatherers being trained at the Hollister Public Library. All photos courtesy of San Benito Rising.] 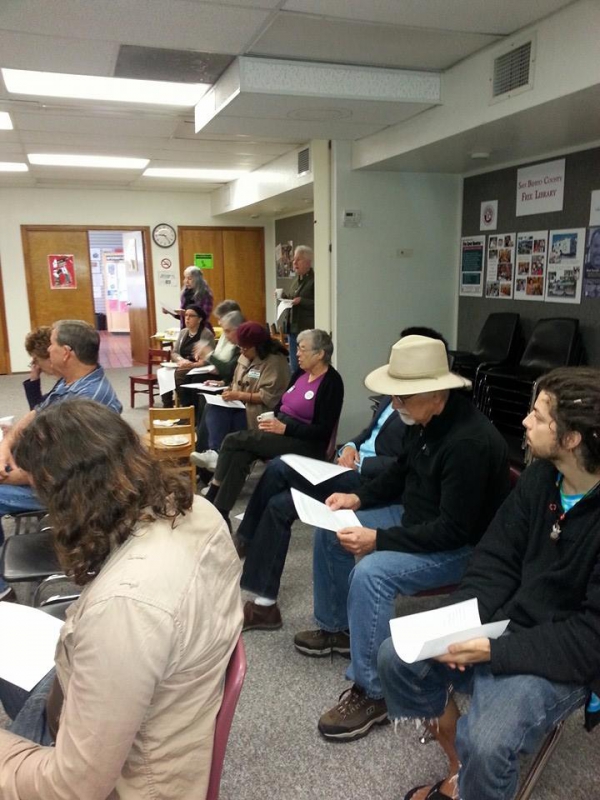 original image (720x960)
From the beginning of the process, organizers have been optimistic about achieving their goal of obtaining 3,500 signatures. They feel that the small population of San Benito County, with less than 17,000 voters, has made a grassroots campaign easier to conduct. They are required to collect 1,642 signatures to succeed in having their initiative placed on the ballot by the county.

Members of San Benito Rising filed the notice of intent to circulate the petition with the county clerk in late February. That notice states that they have begun the process in hopes of "protecting the county’s groundwater supplies and preserving its rural heritage." They believe the county is at a "tipping point" and hope the fracking ban will prevent the possibility of what they call a "proliferation of proposals" to conduct hydraulic fracturing (“fracking”) and other high-intensity petroleum operations in the county’s unincorporated areas.

Residents consider San Benito to be a "frontline" community because they currently have oil and gas drilling in their county, which sits on top of the Monterey Shale formation.

The Monterey Shale or the Miocene Monterey Formation, is an oil formation that stretches from Santa Barbara to Monterey County. Much of the oil in the Monterey Shale is not easily extracted using traditional oil drilling methods. With the increased use of fracking and other extreme extraction techniques, however, oil company interest has placed a new, intense focus on these reserves.

In San Benito County, there are many dry or abandoned oil wells near San Juan Bautista, and near Hollister there are active wells, in addition to many that are dry or abandoned. In 2013, environmentalists began fighting a proposal to bring oil operations near Pinnacles National Park. San Benito Rising is concerned that the oil and gas industry could re-stimulate the abandoned, old wells using new extreme drilling techniques such as cyclic steam injection, acid fracking, and acid matrix stimulation.

The initiative to ban fracking, if passed by San Benito voters, will prohibit the use of any land within the county’s unincorporated area for fracking and other high-intensity petroleum operations. The initiative will also prohibit the use of land for any petroleum operations within the county’s unincorporated residential areas.

"Even conventional, low-intensity petroleum operations can have negative effects if located in the wrong places. These operations can increase noise, traffic, and odors, and also degrade neighborhood appearance. Hence, they are incompatible with residential uses and should be prohibited in all residential areas," the notice of intent reads.

A group of San Benito County residents signed the notice: Paul Hain from Tres Pinos, who is a farmer and rancher; Ann Marie Sayers from Hollister, who is the Tribal Chairperson of Indian Canyon; Margaret Morales Rebecchi from Hollister, who is a retired teacher; Tony Boch, a San Juan Bautista City Council Member; and Jan Saxton, a small business owner from Aromas.

The notice lists the following points as examples of why fracking should be prohibited in San Benito County:

* Fracking and other high-intensity petroleum operations typically inject massive amounts of water, steam and/or chemicals into the ground at high pressure, putting our residents and farms at risk for accidental toxic releases, groundwater contamination, sinkholes, and earthquakes. Given our County’s high seismic activity (San Andreas and Calaveras faults), these risks are unacceptable.

* San Benito County gets much of its freshwater from limited groundwater supplies. Fracking and other high-intensity operations will deplete our precious groundwater by using hundreds of thousands of gallons of water per well. In addition, these operations can produce large volumes of wastewater containing hazardous chemicals that must be stored or disposed of in underground wells, which could leak and contaminate groundwater.

* Fracking and other high-intensity petroleum operations threaten to fragment and industrialize the County’s agricultural areas. The noise, truck traffic, accidents and congestion found in fracking boom areas would destroy our rural way of life.

* High-intensity petroleum operations undermine tourism in the County by diminishing the natural beauty of our area, making our State and National parks and agricultural assets less appealing to visitors.

The petition drive began over the weekend of March 22-23, and San Benito County Supervisor Robert Rivas was the first to sign it. During that launch of petition-related activities, 33 signature gatherers were trained. Training meetings for the gatherers have been held at the Hollister Public Library and also in Aromas.

In June of 2013, San Benito Rising formed and started meeting in public libraries. That month the organization held its first protest against fracking. Group members have spoken out against fracking at local meetings held by the Bureau of Land Management and the California Department of Conservation's Division of Oil, Gas & Geothermal Resources. Protests have also been held in downtown Hollister and at Pinnacles National Park, and most recently the group traveled to the California state capitol where they joined thousands of people at a large rally to urge the governor to ban fracking statewide.

San Benito Rising is an all volunteer organization made up of residents who live in San Benito, Santa Clara, Santa Cruz, and Monterey counties, and has its roots in another local community organization, Aromas Cares for Our Environment (ACE). ACE was formed in 2012 after residents found out a company was exploring the potential for fracking in their community. Aromas is a census-designated place that straddles Monterey County and San Benito County.

The oil prospectors interested in Aromas were identified as Watsonville-based Freedom Resources, which is a subsidiary of the construction company Granite Rock. The focus of ACE then became to learn about fracking, and to educate the public, as well as to monitor the process of oil exploration in their community.

Based on advice from experts on extraction regulation issues in California, the ACE coordinating committee decided to focus on updating the permitting process for oil and natural gas extraction in San Benito.

As a result of ACE's efforts, the San Benito County Board of Supervisors voted 5-0 on June 18, 2013 to approve a new ordinance that put in place novel notice, chemical disclosure, bonding, insurance, water testing, and other requirements that expressly apply to the operators of wells that engage in extreme drilling, fracking, and other well stimulation activities.

Recently, members of San Benito Rising have been organizing to convince the city of San Juan Bautista to ban oil and gas drilling within the city. Organizers feel this would mostly be symbolic, but that it will help build political momentum for the county wide ballot initiative. San Benito Rising believes, based on the public comments made by San Juan Bautista city council members, a city ban may happen "soon". They say the city has been "quite receptive" to the idea of becoming a model green city.

"We believe that advocating for sustainable economic development and green energy are essential to do in parallel with our political work – i.e., making a case to ban fracking and shift away from fossil fuels. We need to provide a vision of an alternative future if we want to be successful at persuading the public to vote against fracking and extreme extraction. Hence, we've been working to make San Juan Bautista a "model green city". If we succeed with San Juan Bautista, we'll work on Hollister next," San Benito Rising said in a press statement.

Organizers with Aromas Cares for Our Environment (A.C.E.) have moved most of their activities over to the San Benito Rising website, but valuable information remains available on the ACE website, and their Facebook group is active. See:
https://sites.google.com/site/aromascares/
https://www.facebook.com/groups/AromasCares/ 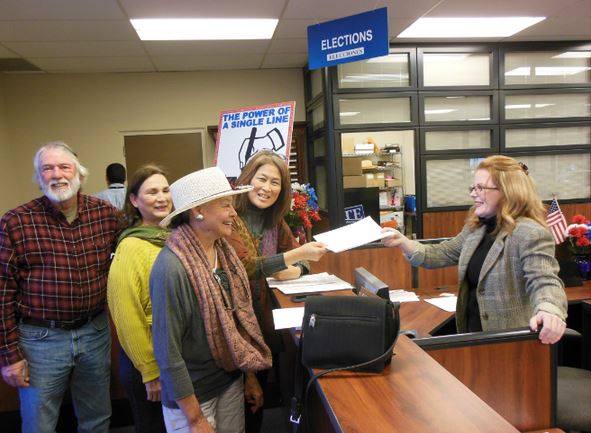 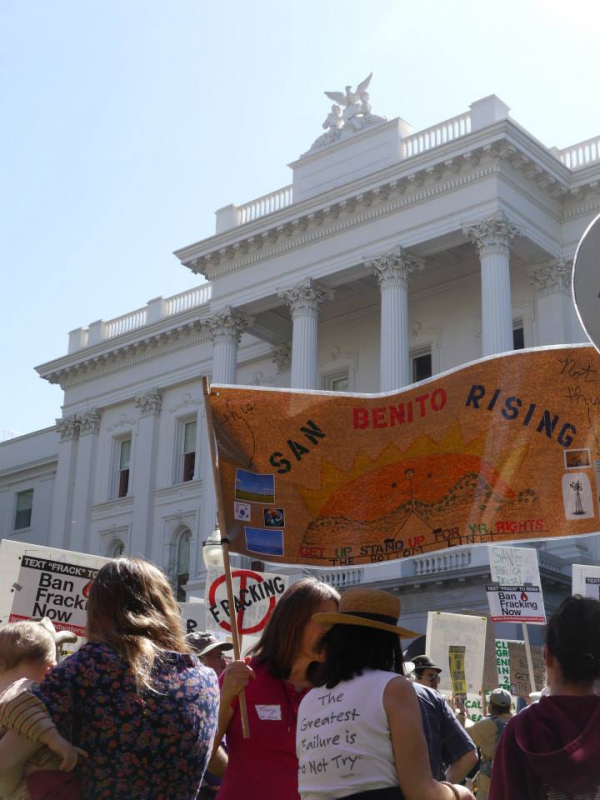 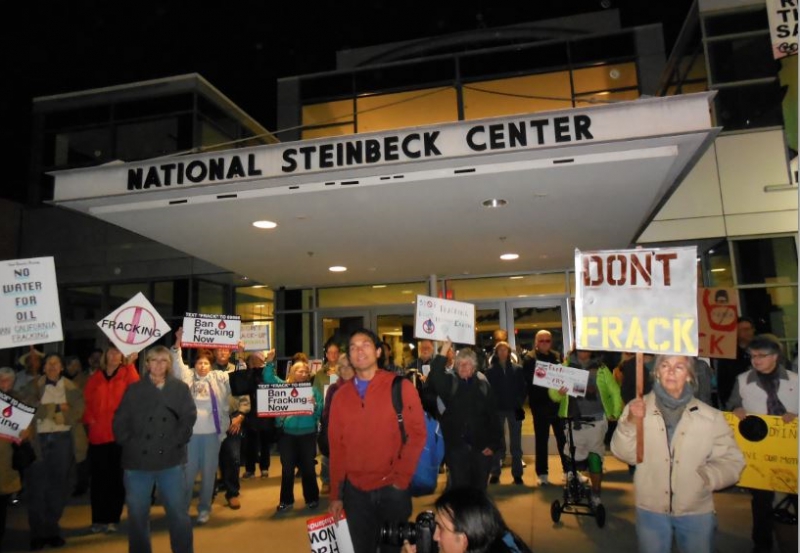 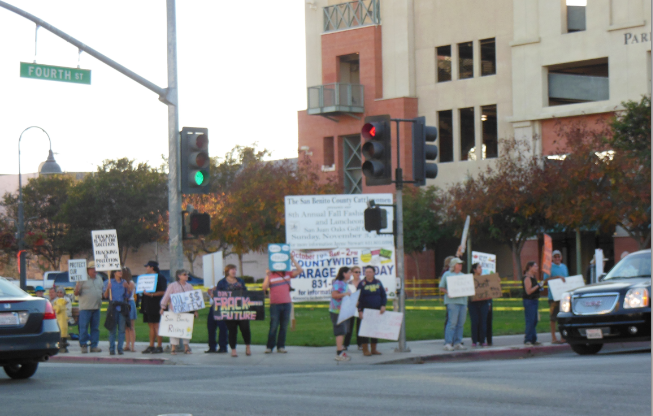 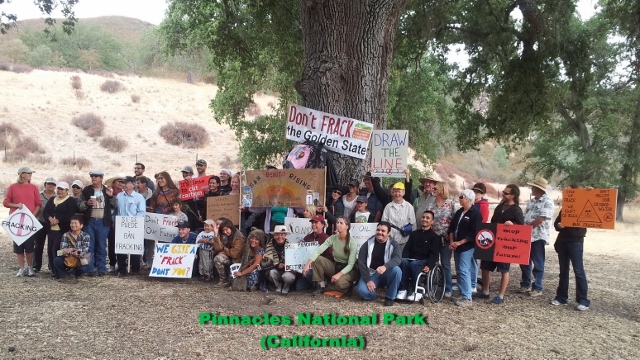 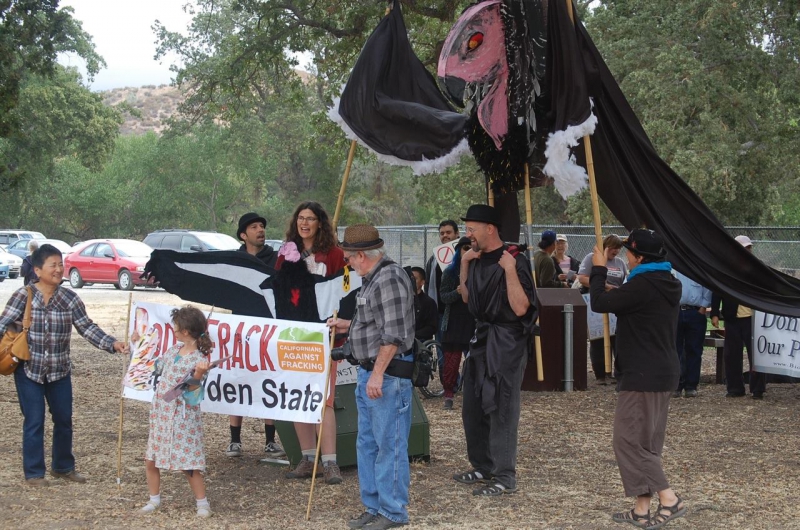 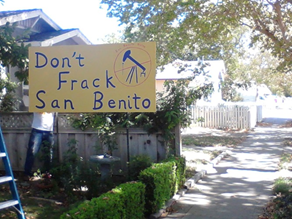 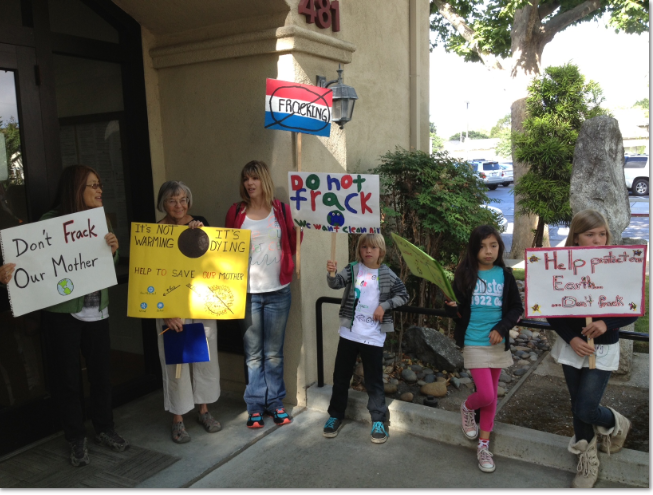 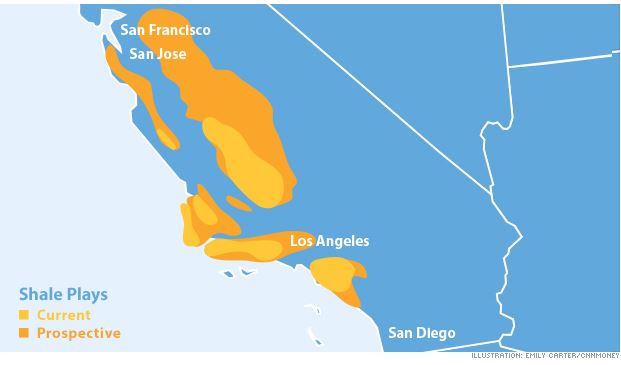 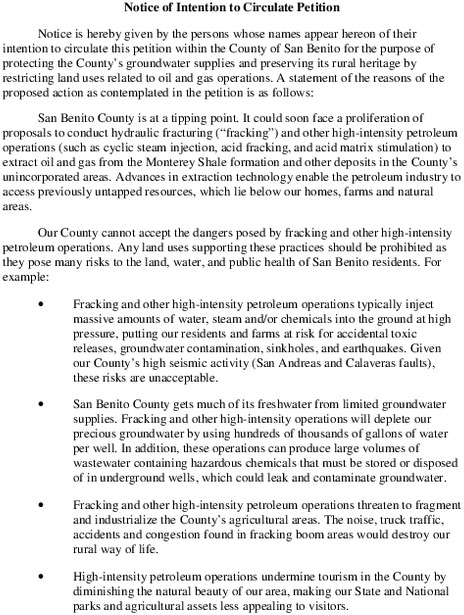 Download PDF (19.5KB)
Add Your Comments
Support Independent Media
We are 100% volunteer and depend on your participation to sustain our efforts!