§VIDEO: Union Leader Josh Brahinsky Arrested As He Complies With Police
by via UAW Wednesday Apr 2nd, 2014 11:26 PM
Copy the code below to embed this movie into a web page:
Download Video (3.9MB) | Embed Video
Watch as Union Leader Josh Brahinsky is arrested as he complies with police requests and walks away from the police back towards the sidewalk, along with a photographer who was documenting the incident.
http://www.uaw2865.org/update-videos-of-po...
§In Solidarity with UAW and the #UCSC20
by solidarity Wednesday Apr 2nd, 2014 11:56 PM 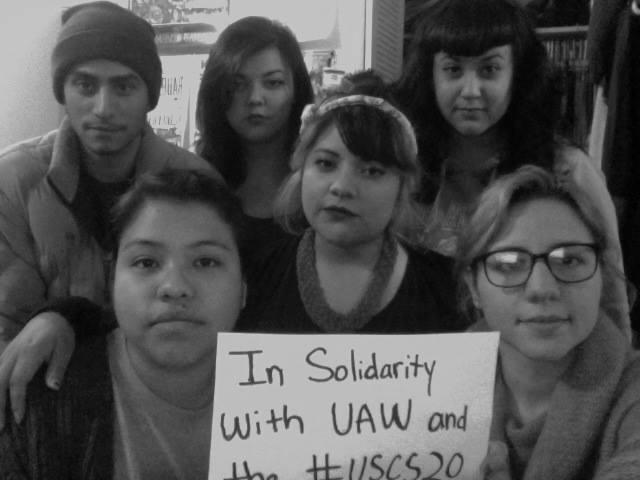 Hi all! We are undergraduates at UCSC and we along with other students from across the state are striking, tomorrow, April 3rd, in solidarity with the TA and GSI union, UAW Local 2865, who are demonstrating in opposition to unfair labor practices and worker intimidation. We would like to invite you and others to show support by creating, posting, and sharing your own strike pledge across any and all social media platforms.

As undergraduates we understand that our learning conditions are the graduate students working conditions and when they advocate for a fair contract, they are advocating to improve the conditions of our education. We stand in solidarity with UAW 2865 and support their demands for equal access for all undocumented workers, smaller class sizes, gender neutral bathrooms, childcare, and to be paid a livable wage. We also stand in solidarity with the 20 student workers arrested today and demand that all charges be dropped.

In supporting the TA's demands for smaller class sizes and better childcare, we as undergrads are advocating for a more personal, intimate, and developmental education by way of reducing an unrealistic workload and creating a support system for educators and their families.

In supporting the TA's demands for better leave policies and to close the $3-5,000 wage gap between UCSC and rival institutions we are saying to the administration that our educators deserve a fair and livable wage and a work environment that respects their mental and physical health needs as well as their obligations to family.

In supporting the TA's demands for more opportunities for undocumented students we are not only saying to the university but also the entire nation that everyone, regardless of status, deserves an education and a dignified means to sustain their own livelihood.

In supporting the TA's demands for the UC to improve on discrimination issues like breastfeeding in public and the creation of gender neutral bathrooms we are saying to the administration that we are and have been ready for a more inclusive and diverse campus environment since its creation.

Striking tomorrow after today's instance of police terrorism is a statement to the administration and the police that we will not be intimidated by their willingness to inflict violence upon us and that we stand together with the #UCSC20 and with anyone else struggling for access to education and just and fair work.

The struggle of the workers and graduate students is the struggle of the undergrad students. We invite you to join us on the picket line starting 5:30 am tomorrow at both the Main and West entrance and also to join us for the "Drop the Charges Rally" at 10am.
Add Your Comments
Support Independent Media
We are 100% volunteer and depend on your participation to sustain our efforts!