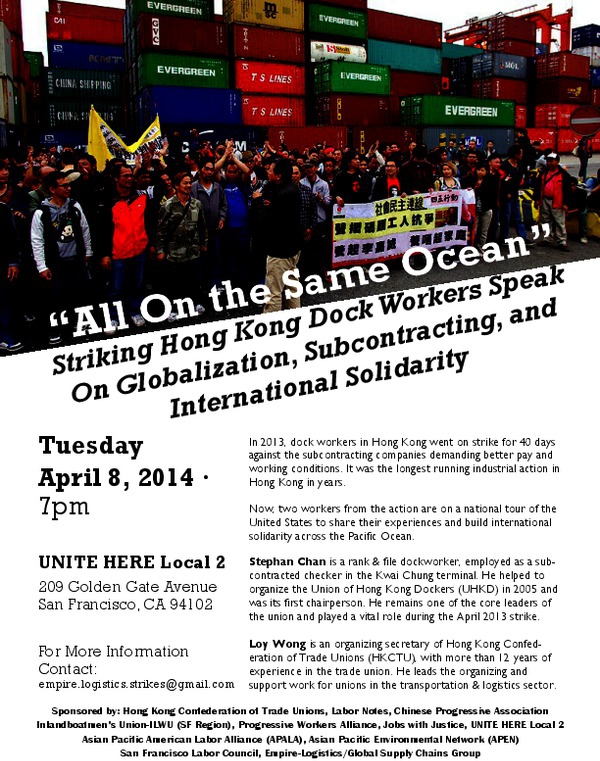 Download PDF (331.4KB)
http://libcom.org/blog/hong-kong-dockers-s...
§Chilean docker will speak too
by SFred Wednesday Apr 2nd, 2014 11:12 AM
This event will have an additional speaker, a docker from Chile:

Nelson Leopoldo Francino Valdes has been the president of the FeTraPI, the Federacion de Trabajadores Portuarios de Iquique, and has served in this position while being a rank-and-file casual at the Port of Iquique since December 2012.

The Union Portuarios de Chile, which is the national port federation, has had several important nation-wide strikes in the past couple of years; the most recent being in January when a three-week strike at the peak of the agricultural harvest and export season won the dockworkers back-pay for stolen lunch breaks.

The Union Portuarios de Iquique is a member of this federation. The Port of Iquique is important strategically in the global trade of copper as it's Chile's biggest export node of that commodity; Chile exports more copper than any other country.
Add Your Comments
LATEST COMMENTS ABOUT THIS ARTICLE
Listed below are the latest comments about this post.
These comments are submitted anonymously by website visitors.