Add an Event
Newswire
Calendar
Features
Home
Donate
From the Open-Publishing Calendar
From the Open-Publishing Newswire
Indybay Feature
Publish to Newswire
Add an Event
Related Categories: California | Central Valley | Environment & Forest Defense | Government & Elections
Feinstein, Congressmen request more Delta water for corporate agribusiness
by Dan Bacher
Saturday Mar 29th, 2014 9:43 AM
"It is disappointing that Senator Feinstein has chosen to thrust political pressure into a severe drought situation that has, and will continue to have, enormous impacts on salmon and other fisheries, including endangered salmon runs spawning and trying to migrate downstream,” said RTD Executive Director Barbara Barrigan-Parrilla. “It is astounding that these politicians would contend that ‘there is clearly no imminent threat to any of the key protected fish species that is attributable to water pumping operations.’” 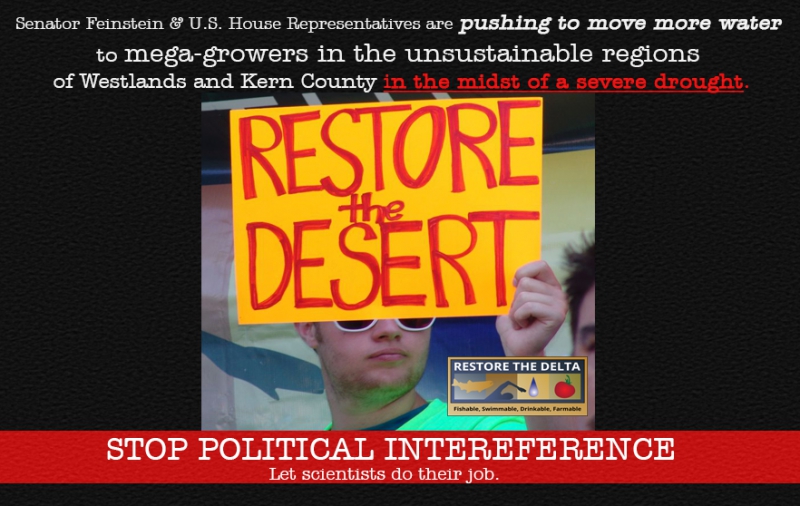 “We are writing to urge you to immediately evaluate the operating criteria that govern the Central Valley Project (CVP) and the State Water Project (SWP) so that actions can be taken as soon as possible to capture the maximum amount of water from this week’s storm in California,” said Feinstein and Representatives Ken Calvert, Jim Costa, Jeff Denham, Kevin McCarthy, Devin Nunes and David Valadao.

The Senator and Congressmen described the impact of the drought on Valley agribusiness – and the supposedly "minimal" impact exporting water to state and federal water contractors would have on fish.

“These numbers show that existing protections for endangered fish are more than adequate. On the other hand, our constituents’ farms and communities are facing potential devastation. From our view, it is apparent that there is a significant imbalance of regulatory burdens,” they said.

They also cited the two storm systems that National Weather Service said will be passing through California this week, saying it could the “last chance” to provide water to the Valley water contractors.

“Based on historical weather patterns, these storms could be our last chance this year to receive, capture, and move a sizable amount of water to those farms and communities that desperately need it for public health and safety and for their livelihoods that are under severe threat,” they noted.

“Biological opinions issued by your Departments regulate the amount of water that can be exported from the Sacramento-San Joaquin Delta in order to protect endangered fish. However, based on the data we cited above, there is clearly no imminent threat to any of the key protected fish species that is attributable to water pumping operations,” they concluded.

You can read the complete letter at: http://www.imperialvalleynews.com/index.php/news/california-news/7843-lawmakers-call-on-administration-to-take-action-to-capture-water-from-storm.html

Restore the Delta: Letter is "disappointing" and "astounding"

"It is disappointing that Senator Feinstein has chosen to thrust political pressure into a severe drought situation that has, and will continue to have, enormous impacts on salmon and other fisheries, including endangered salmon runs spawning and trying to migrate downstream,” said RTD Executive Director Barbara Barrigan-Parrilla. “It is astounding that these politicians would contend that ‘there is clearly no imminent threat to any of the key protected fish species that is attributable to water pumping operations.’”

“It is well-known that the increased water diversions, especially in March, are particularly devastating to salmon, steelhead, sturgeon, smelt and other fish, many of which have become endangered as a result of the pumping," she said. "Most of the water from these storms is being stored in empty reservoirs. What extra water is flowing into the Delta from side creeks and streams needs to remain not only for water quality but to assist this ecosystem being devastated by the drought a chance to survive."

"The impacts of the drought will be felt on our native species for many years to come. We can get by without almonds for a couple of years. It is disappointing that Senator Feinstein is not standing up for the economic engine of the San Francisco Bay Delta Estuary, its water quality and native species that serve not only California’s economic engine but Oregon and Washington as well,” said Barrigan-Parrilla.

“Instead of calling for every available bucket of water to be shipped immediately to unsustainable industrial agriculture, these politicians should instead be pursuing water demand reduction actions, plus reinforcement of Delta levees, improvement of south Delta fish screens and salvage operations, elimination of harmful water transfers through the Delta, and numerous fish protections, preclude the need for the BDCP twin tunnels,” she concluded.

Caleen Audrey Sisk, Chief and Spiritual Leader of the Winnemem Wintu Tribe, summed up Feinstein's subservience to agribusiness: "Mega Ag Corporations and Senator Feinstein are one and the same...they think there is endless water to put in the desert!"

Feinstein and the Representatives' letter was preceded by a similar letter by San Joaquin Exchange Contractors to Interior and Commerce asking that the conditions of the biological opinions protecting Central Valley salmon and smelt be loosened to allow greater Delta diversions. (http://mavensnotebook.com/wp-content/uploads/2014/03/Drought-Letter-to-Sec-Jewell-Sec-Pritzker-3-25-14.pdf)

A coalition of fishing industry and environmental groups quickly issued a press release responding to this letter stating, "A group of wealthy agribusiness interests in the San Joaquin Valley urged Secretaries Jewell and Pritzker to risk the extinction of California’s remaining critically endangered salmon runs by increasing pumping in the Delta to maximum levels over the next few weeks, during the peak of the salmon migration through the Delta."

“In a nutshell, the government is being asked to risk our valuable native salmon stocks and sacrifice thousands of sustainable fishing jobs and the economies of fishing communities all for a small group of wealthy water profiteers,” said Zeke Grader, of the Pacific Coast Federation of Fishermen's Associations (PCFFA), which represents working fishing men and women. “That is unconscionable.” (http://www.indybay.org/newsitems/2014/03/27/18753210.php)

The latest attempt by agribusiness, Feinstein and Representatives Ken Calvert, Jim Costa, Jeff Denham, Kevin McCarthy, Devin Nunes and David Valadao to increase water pumping out of the Delta during a drought takes place as the Brown and Obama administrations are fast-tracking a twin tunnel plan that will make prospects for salmon survival even worse than they are now.

The so-called "habitat restoration" proposed under the widely-opposed plan will take vast tracts of Delta farmland, some of the most fertile soil on the planet, out of agricultural production in order to continue irrigating mega-farms located on toxic, drainage-impaired land on the west side of the Joaquin Valley. The water destined for the proposed tunnels will also be used by the oil industry for steam injection and fracking operations to extract oil from Monterey Shale deposits in Kern County.

For more information, go to: http://www.restorethedelta.org