The groups say the San Joaquin River Exchange contractors are asking state and federal officials to increase pumping in the Delta to maximum levels over the next few weeks, during the peak of the salmon migration through the Delta.

“In a nutshell, the government is being asked to risk our valuable native salmon stocks and sacrifice thousands of sustainable fishing jobs and the economies of fishing communities all for a small group of wealthy water profiteers” said Zeke Grader, of the PCFFA which represents working fishing men and women. “That is unconscionable.”

The latest attempt by agribusiness to increase water pumping out of the Delta during a big drought takes place as the Brown and Obama administrations are fast-tracking a twin tunnel plan that will make prospects for salmon survival even worse than they are now. The Bay Delta Conservation Plan (BDCP) to build the peripheral tunnels will hasten the extinction of Sacramento River Chinook salmon, Delta smelt, longfin smelt, green sturgeon and other fish species, as well as imperil the salmon and steelhead populations on the Trinity and Klamath rivers.

The so-called "habitat restoration" proposed under the widely-opposed plan will take vast tracts of Delta farmland, some of the most fertile soil on the planet, out of agricultural production in order to continue irrigating mega-farms located on toxic, drainage-impaired land on the west side of the Joaquin Valley. The water destined for the proposed tunnels will also be used by the oil industry for steam injection and fracking operations to extract oil from Monterey Shale deposits in Kern County.

The press release is below: 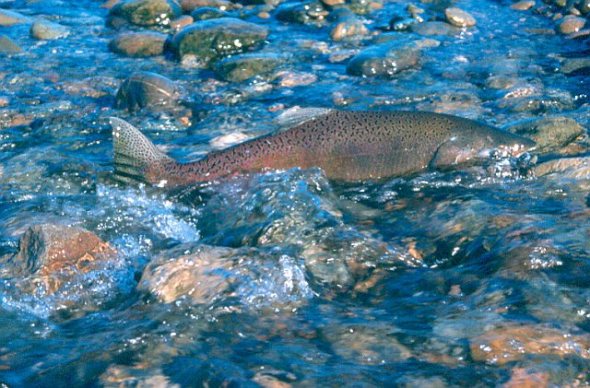 Pacifica (March 27, 2014) – A group of wealthy agribusiness interests in the San Joaquin Valley urged Secretaries Jewell and Pritzker to risk the extinction of California’s remaining critically endangered salmon runs by increasing pumping in the Delta to maximum levels over the next few weeks, during the peak of the salmon migration through the Delta.

They ask for this increase in pumping at a time in which diverting what little water is in the system will cause maximum harm to the already critically endangered winter run salmon, threatened spring run salmon and steelhead, and to the fishing community. This request would not only violate state and federal laws designed to protect Delta water quality and salmon and other native fish that rely on the Delta for their survival, but it also asks Governor Brown and the Obama Administration to abandon their efforts to balance all of the various water needs equally and instead put the needs of a select few agribusiness interests above the needs of everyone else.

The request came from the San Joaquin River Exchange contractors, a group that has been allocated a generous 40% of their contract water supply this year, even though most other water contractors have received a 0% allocation of water this year from the Delta due to the drought, including much of urban southern California. But the Exchange Contractors want more. Not only are these special interests seeking to elevate their needs above all others in the State, but documents prepared by the U.S. Bureau of Reclamation indicate that they are unlikely to even use the water; instead they plan to sell it to the highest bidder, reaping windfall profits at the expense of scarce public resources.

“The salmon industry is trying to dodge bullets in this drought with wild stocks getting hammered in drought-stricken rivers,” said John McManus, executive director of the Golden Gate Salmon Association. “Although hatcheries are trucking fish to evade the drought, the salmon fishing industry faces future shutdown due to harm being done to federally protected wild winter and spring run salmon being sucked into the Delta pumps. The future of California's salmon depends on these flows being allowed to function as nature provided and not sucked into giant pumps that spell death to natural resources that belong to all Californians. Sharing water to address human health and safety needs is something all Californians can support, but this request is entirely different.”

The National Marine Fisheries Service explained earlier this week that the drought is already causing serious harm to native fish, including salmon, and “we run the risk of perhaps losing an entire year-class of salmon.”

The U.S. Fish and Wildlife Service echoed that water conditions in 2014 “could lead to the loss of an entire year class of juvenile fall Chinook salmon.” While these agencies and others have devoted substantial effort and resources over the years to restoring California’s iconic salmon runs, we must not undermine those efforts by allowing surviving salmon and steelhead to get slaughtered by unprecedented levels of pumping during the peak of their migration through the Delta.

Kate Poole, senior attorney with the Natural Resources Defense Council said, “We urge Governor Brown and Secretaries Jewell and Pritzker to uphold state and federal laws meant to protect water quality and fisheries, and refuse the requested waivers by the San Joaquin River Exchange Contractors. Our leaders should not support water supply demands that directly undermine the law and sacrifice California’s 150-year old fishing economy and the Delta’s ecological health. We have much better solutions available than this short-sighted, self-serving water grab.”

Implementing the changes requested by the contractors would require waiving several state and federal laws designed to protect water quality and fisheries, and would require the approval of several state and federal agencies tasked with protecting public trust resources. Governor Brown promised in his drought declaration that changes to existing state law requirements would be limited to those that benefited or avoided harm to fisheries and would not result in fishermen and the north coast fishing communities bearing the brunt of the drought’s impacts. We urge Governor Brown and Secretaries Jewell and Pritzker to refuse the requested waivers and to implement water supply solutions that do not undermine the law or sacrifice one interest for another

“With reservoirs so low, next year’s spawning salmon and their eggs are at great jeopardy too,” said Dr. Jon Rosenfield, a fish biologist with The Bay Institute. “Loss of the salmon that are trying to make it out of the Central Valley now poses an unacceptable risk to the continued existence of winter run and spring run Chinook salmon, Central Valley steelhead and sturgeon and other species that are unique to San Francisco Bay Estuary – once they’re gone, they’re gone forever. If we can’t rely on our fish and wildlife agencies to enforce laws that protect imperiled species, then we can be sure that proposals such as the Governor’s twin tunnels will never be operated responsibly.”

“In a nutshell the government is being asked to risk our valuable native salmon stocks and sacrifice thousands of sustainable fishing jobs and the economies of fishing communities all for a small group of wealthy water profiteers” said Zeke Grader, of the PCFFA which represents working fishing men and women. “That is unconscionable.”

“There are no quick and easy solutions to California’s current drought and it will take all interests working together to address the drought’s impacts on fish, wildlife and people. Choosing to send water to select agribusinesses at a time that could spell doom for endangered salmon will only plunge California back into the water wars that Governor Brown and the Obama Administration have worked so hard to avoid. We need to do better if we are to come together this year for the necessary fixes to California’s water system,” stated Kim Delfino, California Program Director, Defenders of Wildlife.

“Instead of rolling back critical environmental protections for the commercial salmon fishery, we should look for ways to support those impacted by drought just as we would support communities subjected to floods, forest fires, and earthquakes,” said Steve Rothert, Director of the California Regional Office of American Rivers. We must also work together toward longer-term solutions that ensure a future of healthy rivers, fishable salmon runs, and sustainable agriculture.”