Add an Event
Newswire
Calendar
Features
Home
Donate
From the Open-Publishing Calendar
From the Open-Publishing Newswire
Indybay Feature
Publish to Newswire
Add an Event
Related Categories: Santa Cruz Indymedia | Education & Student Activism | Labor & Workers
Students End Hahn Occupation
by Alex Darocy (alex [at] alexdarocy.com)
Thursday Mar 6th, 2014 10:36 AM
Students at UC Santa Cruz left the Hahn student services building today after occupying it for nearly 18 hours. Approximately 30 students decided as a group to leave; all of them were undergraduates. Before exiting the building they cleaned the area they occupied and then sang songs of solidarity and protest. The occupation was in support of UC workers and in continued opposition to the appointment of Janet Napolitano as president of the University of California system. 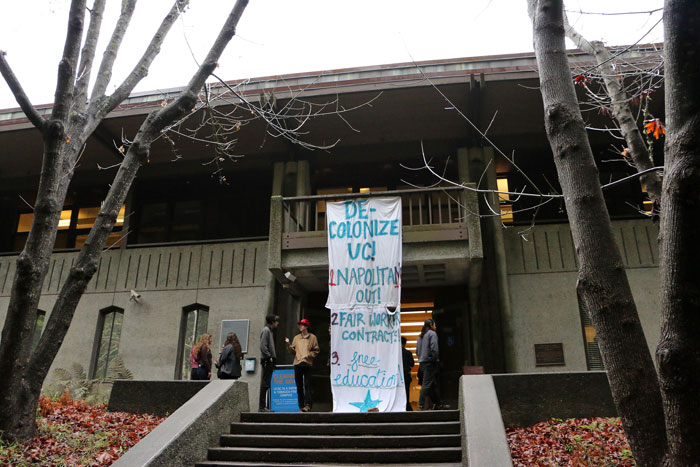 At 6am, approximately eleven police officers arrived on the scene. All but two of them left, however, as students spent some time deciding how to proceed with the occupation. The earliest public counters in the student services building open at 8am, and though workers arrived and entered the offices, they didn't unlock the doors that open out to the Registrar's counters. Students were never told by the administration to leave, or that they were trespassing, but at 6:30am a UC administrator informed them that they were in the building at a time when it was not open to the "public".

After some discussions, students decided to leave Hahn on their own terms. As they were leaving, shortly before 9am, they chanted "We'll be back!"

All the group left at the protest location were modest paper signs placed on the restroom doors which re-designated the spaces as gender neutral.

Within minutes of the students' departure, a unionized AFSCME worker arrived to do some light cleaning in the wake of the occupation. When asked if he supported their demonstration, he replied warmly, "Of course I do!"


For a list of demands the students made, see:

§Are you looking for shameless promotion or dialogue
by Ergoat (from Occupy Cal)
Friday Mar 7th, 2014 10:58 AM
Seriously, the last working groups at Occupy Cal at UC Berkeley have been trying to reach out to the UC Santa Cruz wing #No2Napolitano protests for dialogue and collaboration, but these student activists (led by the UAW behind the scenes) are more interested in protest theater and taking selfies for a new "rebel" Facebook profile pic.

And get back to us: @Ergoat & @bpoffcampus & @CalOpenU
http://ergoat.blogspot.com
Add a Comment
§Berkeley activists were at the UCSC occupation
by Slug
Friday Mar 7th, 2014 12:02 PM
Berkeley students spoke at UCSC during the Hahn occupation:

Ergoat, it sounds like you are a bit out of the loop talking about occupy, and perhaps you are the one guilty of "shameless self promotion".
Add a Comment
§Nice non-response
by Ergoat
Friday Mar 7th, 2014 1:05 PM
I was at #No2Napolitano at UCB, and it put me to sleep, as well as the dozens of riot cops who left during the occupation because they knew it was protest theater. 1st time in 6 years of activism at UC that I've ever seen UCPD go home en masse instead of milking the overtime.

But good on y'all from UCSC: you escalated the #No2Napolitano tactics up to letting those who wanted to occupy in the building, unlike the "Blum 11" who made dozens of supporters who wanted to join them wait outside all night in the rain.

Keep running from that conversation, Slug.
Add a Comment
§Just responding to your misinformation campaign
by Tactics (a)re
Friday Mar 7th, 2014 1:29 PM
....better discussed in person. If you want to reach out, reach out. Errrr. Goat.
Add a Comment
§Misinformation?
by Ergoat
Friday Mar 7th, 2014 1:57 PM
Please, let the indybay community know, in detail, what I've been misinforming about.
Add a Comment
Support Independent Media
We are 100% volunteer and depend on your participation to sustain our efforts!