Add an Event
Newswire
Calendar
Features
Home
Donate
From the Open-Publishing Calendar
From the Open-Publishing Newswire
Indybay Feature
Publish to Newswire
Add an Event
Related Categories: Santa Cruz Indymedia | Education & Student Activism
UCSC Students Shut Down Registrar, Occupy Hahn Building
by Alex Darocy (alex [at] alexdarocy.com)
Wednesday Mar 5th, 2014 7:33 PM
Students at UC Santa Cruz marched to Hahn Student Services Building this afternoon and are currently occupying the Office of the Registrar, which was shut down shortly after students arrived. They are calling for the resignation of Janet Napolitano and for all UC worker demands to be met. [Top photo: Students arrived at the Hahn Building shortly after 3pm] 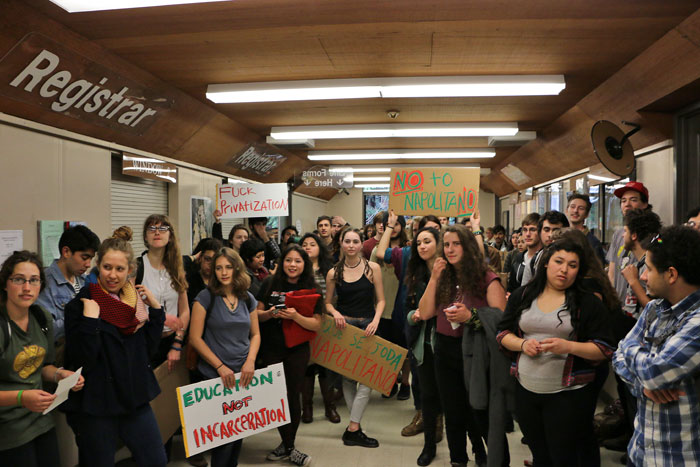 35 students are currently in the front area of the first floor of the building, having a discussion in front of the Registrar's counter where students normally pay their tuition. They are deciding if they will stay the night.

Down the hallway in the back of the building, two community safety officers and one campus police officer are sitting and eating. They say they will be staying in the building all night for the "safety of the students."

Students have listed their demands as follows (a modified set of the demands students issued around the time of the Blum Center occupation in Berkeley):

1. We demand the resignation or impeachment of Janet Napolitano as UC President
immediately.
2. We demand that next and all future UC presidents be someone who
∙      a) is elected by students and faculty
∙      b) has an extensive and positive background in education
∙      c) works towards completely eliminating student debt through full subsidization
∙      d) comes from and has worked with communities in California
∙      e) supports all programs/resources that serve underrepresented communities;
3. The appointment of Napolitano exposes the undemocratic process by which the UC
system makes decisions. In order to address this structural problem we demand a restructuring
of this process which includes:
∙      a) a campus wide election for all future UC regents; this includes having the ability to
nominate, endorse, and campaign for candidates
∙      b) the power to impeach both UC presidents and regents
∙      c) a general democratization of the regents to include true participation by students
and faculty in the central decision making processes of the University.

UC Santa Cruz students added that they want all UC worker demands to be met.


Alex Darocy
http://alexdarocy.blogspot.com/
§Update: Students decide to stay the night at Hahn
by Alex Darocy Wednesday Mar 5th, 2014 8:31 PM
Students have decided to stay the night at the Hahn building and are currently discussing their options for the evening.
§More Photos, End of Occupation Report
by Alex Darocy Friday Mar 7th, 2014 3:47 PM
For photos of the occupation, see part 2:
https://www.indybay.org/newsitems/2014/03/06/18752080.php

Students End Hahn Occupation
https://www.indybay.org/newsitems/2014/03/06/18752138.php
Add Your Comments
LATEST COMMENTS ABOUT THIS ARTICLE
Listed below are the latest comments about this post.
These comments are submitted anonymously by website visitors.