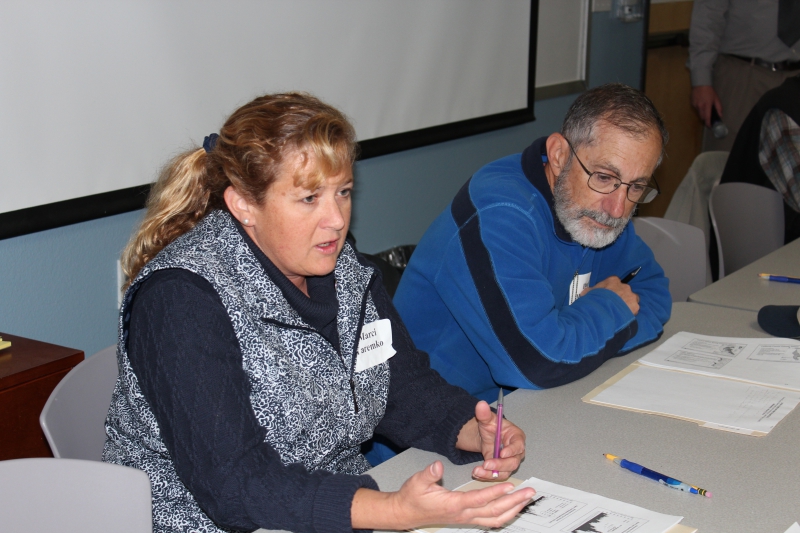 In spite of the record drought, the forecast for recreational and commercial salmon fishing year on the California coast from Horse Mountain in Humboldt County to below Monterey looks relatively good, according to data released at a California Department of Fish and Wildlife (CDFW) meeting in Santa Rosa on Wednesday.

The majority of the fish caught in this region are Sacramento River fall-run Chinook salmon stocks, the driver of West Coast salmon fisheries. The ocean abundance forecast is 634,650 Chinook salmon, less than last year’s forecast of 865,525, but still a promising number.

“The abundance forecast is large,” said Michael O’Farrell of the National Marine Fisheries Service. “Our preliminary prediction is 328,567 spawners that would return to the Sacramento River and tributaries if the 2013 regulations were in place this year.”

O’Farrell said that number is well over their target of at least 190,395 salmon returning to Central Valley rivers to spawn, so this target is “unlikely to constrain 2014 fisheries.”

The other factor constraining the recreational and commercial seasons is protections for Sacramento River winter-run Chinook. The maximum allowable age 3-impact rate is 15.4 percent.

If the same regulations as 2013 were implemented, the preliminary prediction of age 3 salmon impact rate would be 13.2 percent. “This is likely to constrain fisheries south of Point of Arena,” he said.

Last year angling impacts to the winter run Chinook, an endangered species that plummeted from 117,000 fish in 1969 to only hundreds in the early 1990s, were protected from potential impacts by anglers through a combination of days off the water during the summer and a size limit of 24 inches. This season is expected to see similar measures taken.

The recreational salmon season from Horse Mountain to the U.S./Mexico border is set to begin on April 5, while the commercial season is expected to start May 1.

While the prospects for this season look good, this will be no means a record year for salmon – and low water conditions on the Central Valley rivers and poor management of rivers and rivers by the state and federal governments are expected to impact the salmon runs in upcoming years, particularly the winter run.

“The problem isn’t in the ocean – it’s in the rivers,” said Dick Pool, administrator of Water for Fish and board member of the Golden Gate Salmon Association (GGSA). "The problem is getting the young fish down to the ocean. Some of us have dedicated our lives to solving this problem.”

Likewise, Bob Boucke, owner of Johnson’s Bait and Tackle in Yuba City and also a board member of the GGSA, commented, “There are no big changes expected to the ocean seasons that target the Sacramento River fall run Chinooks. A decent quantity of fish is expected this year.”

He emphasized, “The problem is that water diversions from the Sacramento River into the Delta Cross Channel take a percentage of fish corresponding with the percentage of water diverted for export. If 75 percent of the water is diverted, you can expect 75 percent of the smolts (young salmon) to be diverted in the wrong direction rather than towards the ocean. Once in the channel, there’s no hope for the fish.”

The forecast is a far cry from the ocean abundance estimate of 1,651,800 in 2012, a record year for Klamath River fall Chinook stocks.

If the liberal regulations of 2013 for Tribal, recreational and commercial fisheries were in effect this year, only an estimated 19,218 fish would return to spawn, less than half of the 40,700 natural spawner target. So a reduction in the seasons, bag limits and catch quotas for Klamath Management Zone salmon is expected this year.

The 2013 Klamath Bsin fall chinook run estimate ranked 11th out of 36 years. A total of 18,806 fish, ages 2 to 5, returned to the Iron Gate Fish Hatchery on the Klamath River and the Trinity River Fish Hatchery combined. The total of natural spawners, ages 2 to 5, was 69,986 fish.

Based on the preliminary data released on Wednesday and other scientific information, the Pacific Fishery Management Council (PFMC) will craft three options for ocean salmon seasons in its upcoming meeting at the Double Tree Hotel in Sacramento March 7-13. The Council will then make a final decision on the seasons at its April meeting.

For more information, go to: http://www.pcouncil.org/

The season crafting process takes place as Governor Jerry Brown continues to fast-track the construction of the peripheral tunnels under the Bay Delta Conservation Plan (BDCP). The construction of the tunnels would hasten the extinction of Central Valley Chinook salmon, steelhead, Delta smelt, longfin smelt, green sturgeon and other fish species, as well as imperil salmon and steelhead populations on the Klamath and Trinity rivers.