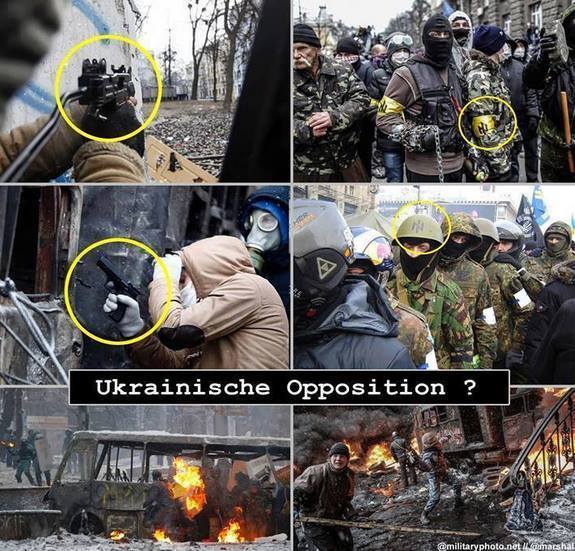 If Ukraine Were The United States

For analogy of what the U.S. is doing to Ukraine, it would be like a foreign power funding the Tea Party movement. This would happen as the Tea Party called Obama an undemocratic communist, demanding his resignation. In the leadership of this foreign backed movement would be the Republican Party, American Nazi Party, and the Independent Party.

The movement would demand Obama's resignation and an interim government of the movement's leaders. The representatives of the foreign power would be caught in a recorded conversation saying they were going to replace Obama with Paul Ryan as the new president. The movement would also be demanding that the United States accept a trade agreement with the intervening power that would force the U.S. to stop taking loans from China, but instead take them from the intervening power under conditions that would include cuts to social spending, fewer protections of workers under American labor law, and an increase in the price of heating fuel that would assure that poor people would die.

In the midst of this the American Nazi Party would be getting foreign aid, gaining recruits, and attacking feminists, unionists, anarchists, communists, and Jews. In addition, the movement would be shooting cops, lighting them on fire with Molotov cocktails, beating them, holding cops hostage, and have the control of government buildings.

Attempts by Obama to restore order would be met by the foreign power denouncing "violent attacks" on "peaceful protesters" and threatening devastating economic sanctions if those police actions to restore order were continued. Meanwhile, representatives of the foreign power would hold a press conference in Washington DC that would include the parties the foreign power backed, the Republican Party, American Nazi Party, and the Independent Party, where they would demand Obama's resignation and denounce Chinese intervention in the internal affairs of the United States.

This is exactly the kind of undemocratic gangsterism and humiliation the United States and European Union have imposed on Ukraine.

For analysis of what is going on, see the following articles I wrote, the first with some analysis and coverage of Tuesday's events, the second an earlier article that goes more in depth, the third including a recording of U.S. officials planning the composition of a coup government in Ukraine:

Ukraine: Leaked Phone Call Confirms U.S. Role in Planning a Future Coup Government
http://www.indybay.org/newsitems/2014/02/09/18750532.php
Add Your Comments
Support Independent Media
We are 100% volunteer and depend on your participation to sustain our efforts!