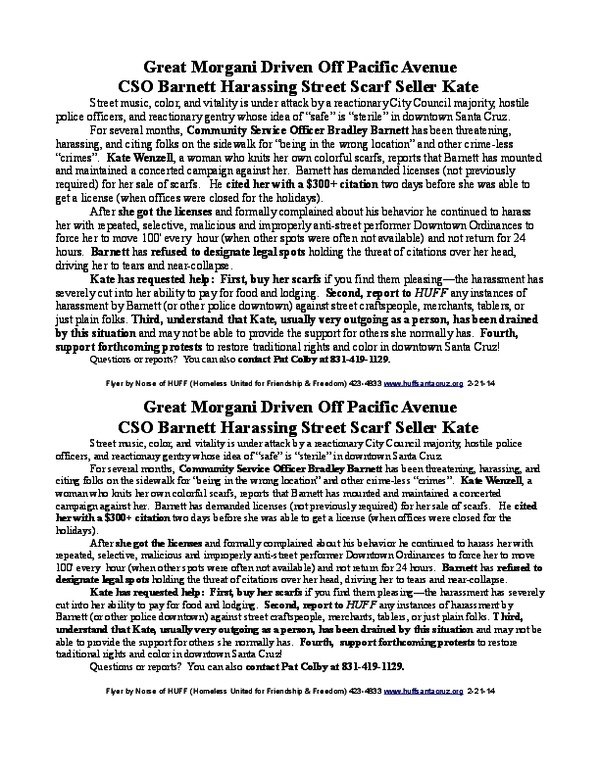 Street music, color, and vitality is under attack by a reactionary City Council majority, hostile police officers, and reactionary gentry whose idea of “safe” is “sterile” in downtown Santa Cruz.

For several months, Community Service Officer Bradley Barnett has been threatening, harassing, and citing folks on the sidewalk for “being in the wrong location” and other crime-less “crimes”. Kate Wenzell, a woman who knits her own colorful scarfs, reports that Barnett has mounted and maintained a concerted campaign against her. Barnett has demanded licenses (not previously required) for her sale of scarfs. He cited her with a $300+ citation two days before she was able to get a license (when offices were closed for the holidays).

After she got the licenses and formally complained about his behavior he continued to harass her with repeated, selective, malicious and improperly anti-street performer Downtown Ordinances to force her to move 100' every hour (when other spots were often not available) and not return for 24 hours. Barnett has refused to designate legal spots holding the threat of citations over her head, driving her to tears and near-collapse.

Kate has requested help: First, buy her scarfs if you find them pleasing—the harassment has severely cut into her ability to pay for food and lodging. Second, report to HUFF any instances of harassment by Barnett (or other police downtown) against street craftspeople, merchants, tablers, or just plain folks. Third, understand that Kate, usually very outgoing as a person, has been drained by this situation and may not be able to provide the support for others she normally has. Fourth, support forthcoming protests to restore traditional rights and color in downtown Santa Cruz!