Add an Event
Newswire
Calendar
Features
Home
Donate
From the Open-Publishing Calendar
From the Open-Publishing Newswire
Indybay Feature
Publish to Newswire
Add an Event
Related Categories: International | San Francisco | Labor & Workers
Solidarity Call for February 25 People’s Strike in Korea-Solidarity Needed Globally & SF
by Transport Workers Solidarity Committee
Tuesday Feb 18th, 2014 8:59 PM
There has been an international call for action in support of Korean workers who are organizing a general strike on Feb 25. There will be a solidarity action for the Korean workers and people at the Korean Consulate in San Francisco on Feb 25 at 4:00 PM a 3500 Clay St./Laurel in San Francisco.
For more information go to http://www.transportworkers.org 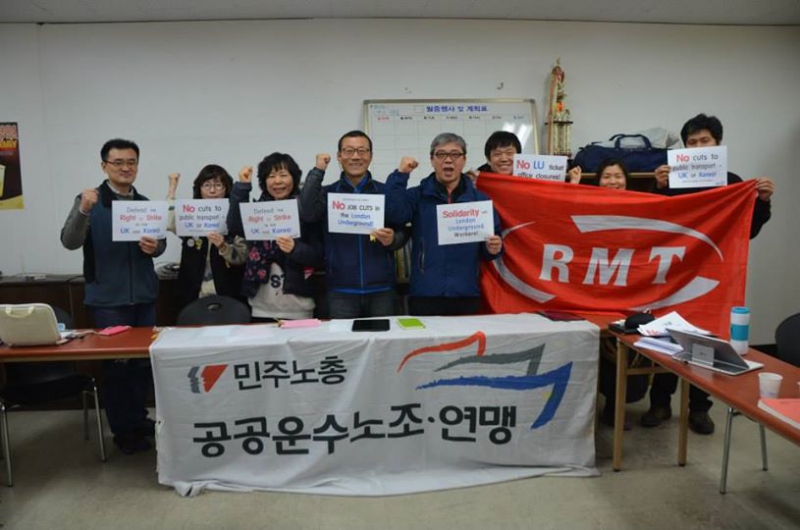 Solidarity with the Korean General Strike!
Defend the Korean Railway Workers Union!
Support The Struggle Against Privatization of KORAIL!
In a vicious attack on the fundamental trade union rights of the Korean labor movement, South Korean President Park Geun-hye, in December, dispatched a battalion of some 5,000 police to surround and launch an assault on the offices of the Korean Confederation of Trade Union (KCTU) in order to arrest the leadership of the KRWU. Unable to find them, police arrested over 100 union members and the government is preparing to sue workers individually.
The Korean railway workers are members of the Korean Federation of Public Services and Transportation Workers’ Unions (KPTU). They’ve been opposing the privatization of the national railway, which would not only threaten the jobs of railway workers but also threaten the health and safety of the workers and the public. The Korean government action against the railway workers is not an isolated case. The Park government and its predecessors have repressed teachers and other public workers for organizing unions. They’ve passed laws that make workers personally liable to lawsuits if their union goes on strike because they say strikes “obstruct business”. But what about the workers’ right to strike because businesses don’t provide safe working conditions, decent social benefits and a living wage? Government-imposed fines have led to the bankruptcy of large numbers of workers and even suicides.
This effort to destroy the Korean labor movement is backed by the US government. Both Democrat and Republican administrations, through so-called “free trade agreements” have been forcing privatization and deregulation internationally against the working class, resulting in unions being busted.
For example, the South Korean government with the cajoling of the US government is also pushing forward with the Trans Pacific Partnership (TPP) which would privatize the national healthcare system of Korea and force further deregulation of the Korean economy harming workers and the public. The Park regime is attempting to bust the KRWU to pave the way for the TPP. These capitalist economic policies pushed by the IMF and World Bank and backed by multi-nationals have cut workers’ social benefits, public services and destroyed
unions around the world. To enforce these repressive and exploitative programs, capitalist governments are pushing further militarization of the Korean peninsula for the encirclement of China.
Transit workers in the San Francisco Bay Area represented by the ATU, SEIU, AFSCME and other unions were under assault recently. Union busters have been hired to break their unions and lay the basis to privatize the public transit system in the Bay Area and around the country. Veolia and other multi-national corporations have their eyes on buying a privatized KORAIL for greater profits. This will only harm the Korean railroad workers and the people of Korea.
We stand with the Korean railway workers and the Korean working class for the right to strike against the privatization. We support the 2/25/2014 KCTU general strike to challenge the Korean President Park Geun-hye and her anti-labor union busting government.
The Transport Workers Solidarity Committee has helped organize labor struggles in the Bay Area including on the docks. We understand that a victory for Korean workers is victory for all of us! Same struggle same fight!
Today, in solidarity with the KRWU-KPTU and the KCTU, we demand:
* Immediate release of all jailed trade unionists
in Korea! No reprisals! Reinstate all fired
workers!
* Immediate halt of all lawsuits against trade
unionists! Drop the fines!
* Defend the right of Korean railway workers
to strike against privatization of the KORAIL
system!
* Down with the Park Geun-Hye government!
Workers to power!
* Solidarity with the struggle against the building of a military base in Jeju Island, establishing a US military base to threaten China and North Korea!
* Smash the National Security Laws used to suppress democratic rights, free speech and the right to form a working class party.
(2/16/2014) Initiated by The Transport Workers Solidarity Committee (http://www.transportworkers.org)

Whereas, the Korean Railway Workers Union have opposed the privatization of KORAIL, the Korean public railway system; and

Whereas, the KRWU went on strike on December 9th to stop this privatization; and

Whereas, the Korea government fired over 4,000 members of the KRWU and ordered the arrest of the leadership of the union; and

Whereas, the Korean government without a warrant raided the offices of the Korean Confederation of Trade Unions KCTU on December 22, 2013 and arrested 138 trade unionists; and

Whereas, the strikers voted to return to work on December 31 with a promise that there would be a government legislative review of the privatization process; however, the government is still arresting union leaders and threatening to sue union members personally for damages that occurred during their strike; and

Whereas Korean public workers and public education teachers face laws preventing them from organizing and having basic union rights; and

Whereas, trade union leaders of the Korean Railway Workers Union have been jailed by the government; and

Whereas, the KRWU and KCTU have called for support and solidarity actions from trade unionists throughout the world; and

Whereas, the ITF and unions throughout the world have called on the Korean government to release the jailed trade unionists, to stop the attacks on the KRWU and to end the plans to privatize the KORAIL system; and

Whereas, US workers also face attacks on democratic labor rights, including their right to strike, and the continuing practice of privatizing and outsourcing jobs throughout the economy; and

Whereas, the Korean Confederation of Unions KCTU has called for a national strike on Feb 25, 2014 and seeks international support for their struggle; and

Whereas, the fight against privatization and deregulation is connected to US labor's struggle against the Trans Pacific Partnership and other trade agreements that weaken labor in the US and globally; and

Whereas, at the January 17 solidarity rally at the San Francisco Korean Consulate, trade unionists including members of the San Francisco Labor Council who were peacefully rallying for the Korean Railway Workers Union were assaulted by a protest organized by the Korean government; and

Whereas the right to peaceful assembly both in the US and Korea must be defended as a labor and human right,

Therefore be it Resolved this Council supports and will mobilize our affiliates for a lobby of the Korean Consulate in San Francisco on Feb 25 at 4:00 PM at 3500 Clay St. San Francisco and calls on the Korean government to end their attacks on the democratic labor rights of Korean railway workers and the labor movement, to end the privatization of KORAIL and calls for the release of all jailed trade unionists and the elimination of the law that allows Korean workers to be sued for taking strike action and,

Submitted by Rodger Scott, AFT Local 2121, and adopted by the San Francisco Labor Council on February 10, 2014.

The Korean government has jailed the leaders of the Korean Railway Workers and is pushing ahead to privatize the railroads and bust the KRWU union
http://www.transportworkers.org/node/1091
§Stop Privatization Of Korean Rail
by Transport Workers Solidarity Committee Tuesday Feb 18th, 2014 8:59 PM 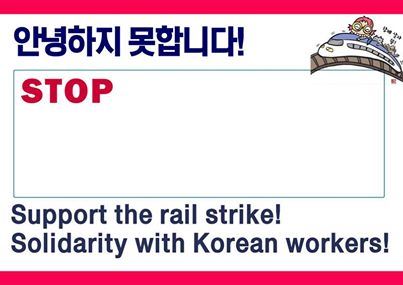 The entire labor movement in Korea is united against privatization of the railways.
http://www.transportworkers.org/node/1091
Add Your Comments
Support Independent Media
We are 100% volunteer and depend on your participation to sustain our efforts!