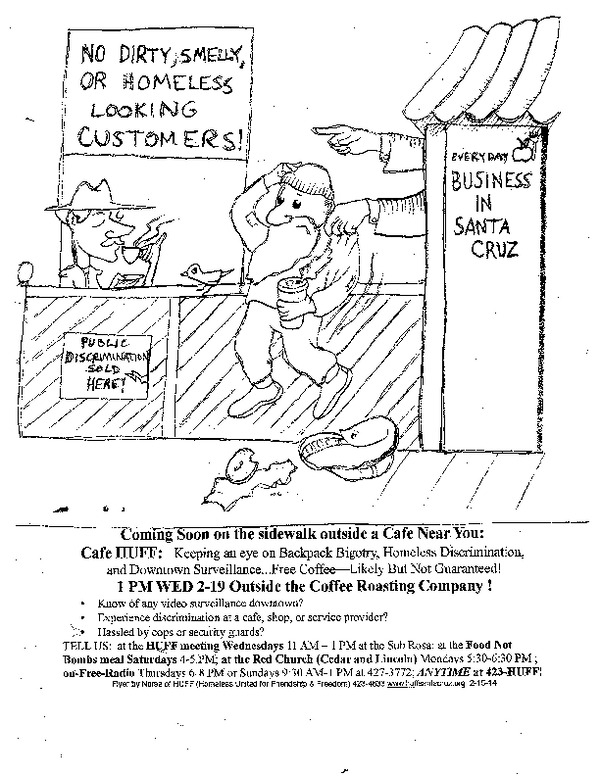 Following up on an earlier survey where the Coffee Roasting Company, Starbucks, and Peets acknowledged they were banning people carrying backpacks--and on the heels of reports of exclusionary policies at the Cafe Pergolesi (Backpacks Allowed) and the Abbey Cafe, HUFF (Homeless United for Friendship & Freedom) voted last week to sample public opinion and observe policy in front of the Coffee Roasting Company in downtown Santa Cruz to raise its concerns about anti-homeless discrimination. HUFF will provide coffee as long as it lasts in order to encourage participation and discussion.

Since then HUFF had continued to receive reports of homeless-looking people, travelers, and youth facing exclusion, even after paying for service at various businesses.

Some have suggested the the apparent spread of exclusionary policies at coffee shops have driven folks to more traditionally liberal venues like the Cafe Pergolesi. In response police have been threatening Cafe Pergolesi with a crackdown and Pergolesi management has responded by not only evicting some paying but homeless-looking customers, but also directing people on the public sidewalk to "move along".

Other reports have noted the crackdown of SCPD zealots like CSO Barnett on Pacific Avenue (reportedly targeting scarflady Kate W and harassing other musicians), Parks and Recreation Ranger seizure of homeless survival gear along the riverbank reported by Ricardo Lopez, and discriminatory enforcement of the "no dogs after dark downtown" where police are reportedly accosting homeless-looking dog owners and actually seizing some of them. Others report heavy-handed security "First Alarm" guards at the library and surrounding areas, denying a disabled man access to the disabled library bathroom, and security thug "Big John" driving those who nod out out of the library.

In addition, we've received reports of Officer Azua & other Sleepsnatchers repeatedly ticketing sleepers outside for "illegal sleeping" when there is shelter for less than 5% of the homeless community and the weather is creating a public safety hazard for the poor outside.

In the past HUFF has proposed a code of conduct, an appeal process, and a non-discrimination pledge as well as peer pressure. The goal now to ensure that innocent people are not unfairly targeted in the increasingly anti-homeless "Take Back Santa Cruz"-style wave of hostility that has spread over Santa Cruz.
Added to the calendar on Sun, Feb 16, 2014 11:51PM
Add Your Comments
Support Independent Media
We are 100% volunteer and depend on your participation to sustain our efforts!