by Dan Bacher
Restore the Delta (RTD) on Friday, February 14 organized a bus and several car pools of people, including Delta farmers, fishermen, Tribal members, environmentalists and Delta residents, to travel from Stockton to the Fresno area to call upon President Obama not to support the peripheral tunnels and to led federal officials do their job without interference. The group held a press conference in Fresno in the morning and then rallied at an intersection on the West side of the San Joaquin Valley near Firebaugh in anticipation of the President’s Motorcade going by.

The President, rather than going by motorcade, instead traveled by helicopter to a location near Firebaugh to meet behind closed doors regarding the drought with selected officials, including Tom Vilsack, U.S. Secretary of Agriculture, Tom Birmingham, General Manager of the Westlands Water District, and Arturo Rodriguez, head of the United Farmworkers Union.

Members of the group effectively conveyed their message to numerous media outlets, ranging from NBC News, to the Washington Post, to Pacifica News.Tunnel opponents urge Obama not to support water export tunnels.

Photo of Delta advocates rallying at an intersection near Firebaugh by Dan Bacher.

Below is the RTD press release. A more complete report will follow. 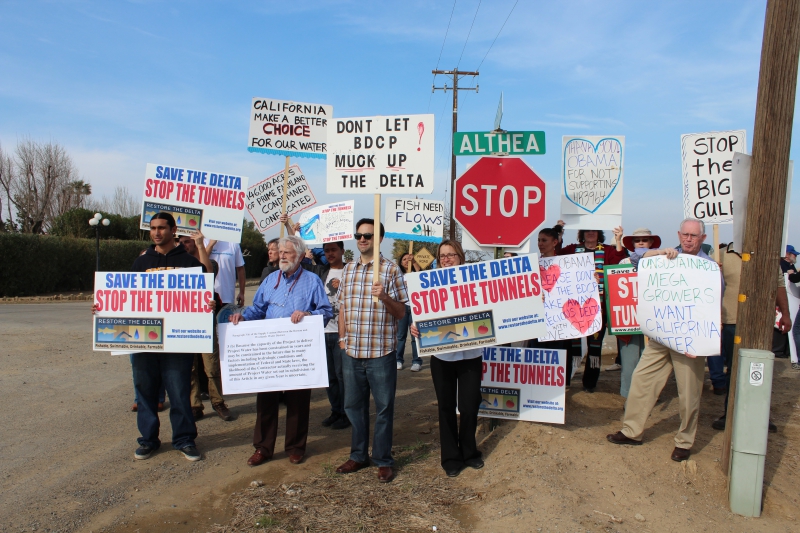 Fresno, CA- Restore the Delta (RTD), opponents of Gov. Brown’s rush to build Peripheral Tunnels that would drain the Delta and doom salmon and other Pacific fisheries, on Friday, February 14 held a news conference as President Obama arrived, and called upon him to not support the tunnels, to let federal scientists do their job without political interference. Restore the Delta urged the president and the governor to embrace better policies for a sustainable water future.

“President Obama should not be misled that the peripheral tunnels are of any value in meeting California’s water challenges. We implore him not to support this boondoggle that mainly benefits a handful of mega-growers,” said Barbara Barrigan-Parrilla, executive director of RTD. “The President needs to know where our water is going in order to decide whether to spend billions to continue feeding water buffaloes, or to change direction. Westlands Water District uses the current water scarcity to push the Peripheral Tunnels, but that is the wrong answer. We ask the president to meet with Delta farmers and community leaders as well.”

“California needs alternatives to the current, failed water policies, which treat water as though it were a limitless resource. California needs to reduce the demand for water, and reduce reliance on the Delta,” said Barrigan-Parrilla. “The combination of these demand reduction actions, plus reinforcement of Delta levees, improvement of south Delta fish screens and salvage operations, elimination of harmful water transfers through the Delta, and numerous fish protections, preclude the need for the BDCP twin tunnels.”

Delta resident Rogene Reynolds told the news conference, “As we know, in California water is wealth. The peripheral tunnels are a massive transfer of that wealth from all of the rest of us to Westlands and Kern billionaires who are growing permanent crops for export. The excuse of revitalizing the Delta is just political cover for that transfer. The losers in this process will be the California taxpayers, who will fund a massive project to satisfy the greed of a few.”

Tuolumne County sustainable water policy advocate Jerry Cadagan said, “As the President focuses on the problems of the agricultural industry, we must remember that almost all Californians are in a world of hurt due to the drought. My county of Tuolumne will run out of water by July for essentials like drinking water if we don’t get some relief. Just as the farmers in the Valley provide us with food, so do the fishermen on the coast. The fishing industry has the same employment and economic problems as the growers of fruits and nuts. There needs to be a better balance in how we allocate our water and relief dollars.”

“Southern California has withstood the driest year on record with investments in efficiency and recycling, precluding mandatory restrictions. We have done a good job in the past reducing demand and keeping water in storage, but there is far more we can do, including cleaning up the San Fernando valley aquifer in Los Angeles to allow recharge of recycled water on par with Orange County's very successful program. The solutions we have achieved need to be replicated statewide,” said Southern California Watershed Alliance Exec. Dir. Conner Everts.

Restore the Delta urged the governor to adopt these sustainable water policies:
1. Expand and fund statewide water efficiency, recycling, storm water reuse, and demand reduction programs beyond the scale of the current 20/20 program. Make the program mandatory for urban and agricultural users.
2. Retire agricultural land in the San Joaquin Valley that is drainage impaired. These lands are mostly in the Westlands Water District.
3. Reduce exports from the Delta during dry and critically dry water years to the level that will support public health and safety. In normal and above normal water years, limit exports from the Delta to 3 million acre-feet; which provide adequate outflows – in accordance with SWRCB guidelines – and help restore Delta habitat and fisheries.
4. Maintain water quality standards in the estuary and in impaired rivers.
5. Monitor and report statewide groundwater usage.
6. Return the Kern Water Bank to state control, restore the Article 18 urban preference, and restore the original intent of Article 21 surplus water in SWP contracts.
7. Preserve the provisions of state and federal Endangered Species Act, Wild and Scenic River protections, San Joaquin River Settlement, and the Central Valley Project Improvement Act.
8. Revise water rights and contract levels to align with water that is actually available. The State has granted five times the amount of water that is available in a typical year. Rein in “paper water” that now exists.

Restore the Delta is a 15,000-member grassroots organization committed to making the Sacramento-San Joaquin Delta fishable, swimmable, drinkable, and farmable to benefit all of California. Restore the Delta works to improve water quality so that fisheries and farming can thrive together again in the Sacramento-San Joaquin Delta. http://www.restorethedelta.org.

Add Your Comments
Latest Comments
Listed below are the latest comments about this post.
These comments are submitted anonymously by website visitors.
TITLE
AUTHOR
DATE
HR3964
Beeline
Support Independent Media
We are 100% volunteer and depend on your participation to sustain our efforts!