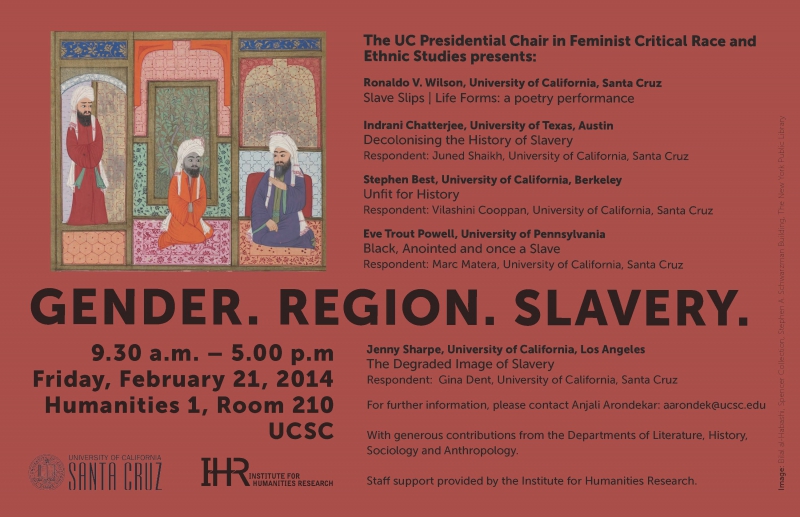 Import event into your personal calendar
Date:
Friday, February 21, 2014
Time:
9:30 AM - 4:30 PM
Event Type:
Other
Organizer/Author:
Location Details:
Humanities 1, Room 210
Humanities and Social Sciences Facility, UC Santa Cruz
For slavery studies, engagements with the geopolitical have robustly shifted the angles through which the field might begin to imagine collusions, collaborations and conversations with regions of the world. Historians, in particular, have contributed to our understanding of the forces at work in the making of ‘regions’ and ‘slavery’ between the fifteenth and the twentieth centuries. However, such scholarship has minoritized gender relations in the making of such geographies. This colloquium reverses the trend by foregrounding the question: what would regional histories of ‘slavery’ look like if interrogated as formulations of gender? Eschewing the conventional segregation and/or minoritization of regions as spatialities that provide local historical flavor, the colloquium seeks to simultaneously correct regional asymmetries of the past of slavery, as well as highlight the centrality of gender in the making and conceiving of ‘region’ itself. Central to our concerns is an interrogation of race as understood primarily through the history of the transatlantic slave trade, such that this idea of race could be said to constitute the background against which all representations of racial formation take place. Rather, our presenters ask, for example, what would it mean to imagine an analytic of race that would take the transatlantic trade to the Indian Ocean and not produce African subjects in the same trajectory of slavery? What are the different life-forms and histories of slavery that exceed the hegemonic plantation model of slavery?

Sponsored by the Presidential Chair in Feminist Critical Race and Ethnic Studies, with generous contributions from the Departments of Literature, History, Sociology, Anthropology and the Institute for Humanities Research.

For further information, please contact Anjali Arondekar: aarondek [at] ucsc.edu
END_OF_DOCUMENT_TOKEN_TO_BE_REPLACED
Added to the calendar on Fri, Feb 14, 2014 9:14AM
Add Your Comments
Support Independent Media
We are 100% volunteer and depend on your participation to sustain our efforts!