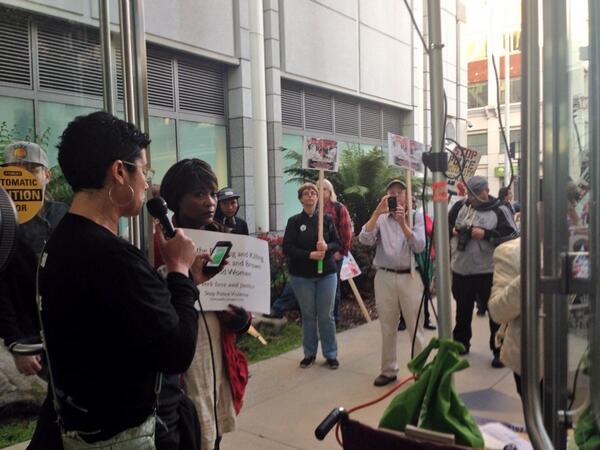 A protest of more than one hundred people, including dozens of family members of Californians murdered by police, outside A.G. Kamala Harris’ office at the State Building in Oakland ended with ten arrests.

The arrests occurred when protesters refused to vacate the lobby of the State Building in Oakland, insisting on first speaking to a representative of Harris’ staff.

The Justice for Alan Blueford Coalition is calling for the protesters immediate release and for A.G. Kamala Harris to address their demands.

Here are excerpts from the letter activists attempted to deliver to A.G. Harris’ office:

On behalf of the Justice for Alan Blueford Coalition, we request that you exercise your authority to open a criminal investigation into the killing of Alan Blueford by Oakland Police Officer Miguel Masso on May 6, 2012. Despite overwhelming evidence that Officer Masso committed multiple acts of misconduct in connection with Alan's death, the Alameda County District Attorney has failed to initiate criminal proceedings and has instead exonerated Officer Masso without conducting any meaningful inquiry into his actions. We urge you to exercise your authority under Article 5, § 13 of the California Constitution and Government Code §§ 12511-12512 to conduct an independent investigation into the circumstances of Alan Blueford's death. We and Alan's family will do everything possible to assist you in that effort.