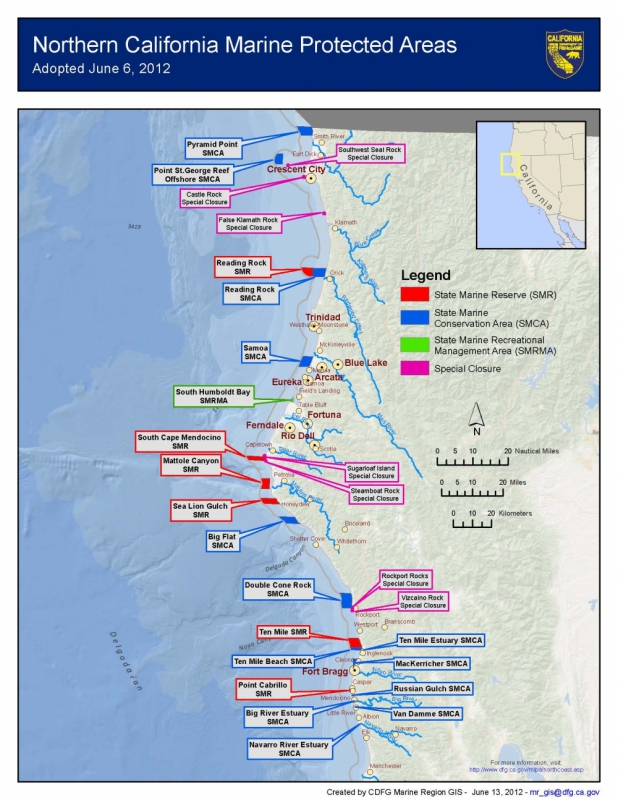 State officials and representatives of corporate "environmental" NGOs engaged in a flurry of boasting about these so-called "science-based" "Yosemites of the Sea" and "underwater parks."

“This is a great day for California’s ocean and coastal resources,” gushed Secretary for Natural Resources John Laird, a strong supporter of the MLPA Initiative, as well as the Bay Delta Conservation Plan (BDCP) to build the peripheral tunnels. “As promised, we have completed the nation’s first statewide open coast system of marine protected areas, strengthening California’s ongoing commitment to conserve marine life for future generations."

The news release from the Department of Fish and Wildlife touted the network of so-called "marine protected areas" created under the MLPA Initiative as "the first in the United States to be designed from the ground up as a science-based network, rather than a patchwork of independent protected areas without specific goals and objectives."

Unfortunately, Laird, the Department and corporate "environmentalists" failed to mention the alarming fact that Del Norte District Attorney Jon Alexander on February 23, 2012 had arrested Ron LeValley, the Co-Chair of the MLPA Initiative "Science Advisory Team" for the North Coast that created the alleged "science-based" marine protected areas, on a $1 million warrant. The warrant accused him of burglary and embezzlement of Yurok Tribe money and conspiracy to commit a crime in collaboration with Roland Raymond, Yurok Tribe Forestry Chair.

The District Attorney later dropped the charges to allow federal authorities to pursue the charges against Raymond and LeValley. Then the U.S. Attorney on October 11, 2013 formally charged Ron LeValley of Eureka with “conspiracy to commit embezzlement and theft from an Indian Tribal Organization" in a scheme with Roland Raymond, Yurok Tribe Forestry Director.

On February 11, this case moved one step closer to resolution when LeValley, of Mad River Biologists, pled guilty to a single federal charge of conspiring to embezzle nearly $1 million in federal funds from the Yurok Tribe.

Court documents reveal that LeValley conspired with Roland Raymond to embezzle the funds through a complex scheme of fake and inflated invoices and payments for spotted owl surveys that LeValley and his organization never performed.

Matt Mais, spokesman for the Yurok Tribe, the largest Indian Tribe in California, confirmed LeValley’s guilty plea in the scheme that proceeded between 2007 and 2010. The Tribe declined comment on the case at this time.

In January, a judge sentenced Raymond to serve 36 months in federal prison for his role in the embezzlement scheme. Raymond pleaded guilty to the single conspiracy charge.

LeValley is scheduled for sentencing on May 20, 2014. The terms of his plea agreement had not been made public as of the afternoon of February 11, according to the North Coast Journal. (http://www.northcoastjournal.com/Blogthing/archives/2014/02/11/biologist-pleads-guilty-in-yurok-embezzlement-case)

The link to the indictment is available at: http://noyonews.net/wp-content/uploads/2013/10/U.S._v._Ron_LeValley_As_Filed.pdf

The Yurok Tribe, fishing groups and grassroots environmentalists were outraged by the embezzlement scheme from the moment it was uncovered.

On February 14, 2012, the Yurok Tribal Council, in a letter to Tribal Members expressed "great disappointment and outrage" over "serious allegations of theft of Tribal resources" by two biologists and the former Yurok Forestry Department Director after the embezzlement was discovered. (http://extras.times-standard.com/multimedia/pdfs/YrkTrb_ltr2.pdf)

The letter informed Tribal members that, as part of the internal investigation, the Tribe would institute a series of measures including the hiring of a Controller and Auditor General; the hiring of an Accounting Fraud Examiner; and the implementation of an independent review of its fiscal and associated procedures.

"The Tribal Council understands the outrage that we all may feel as the victims of these alleged crimes,” said Thomas O’Rourke, Chairman of the Yurok Tribe, in the letter. “The Tribe will provide more information shortly and will continue to insure that these alleged crimes that are subject to the fullest prosecution under the law.”

Many North Coast residents believe the charges against LeValley call into question the legitimacy of the "science" used to close vast areas of the North Coast to fishing and gathering under the MLPA Initiative – while doing nothing to stop pollution, fracking, oil drilling, wind and wave energy projects, military testing and all human impacts on the ocean other than fishing and gathering.

“I would like to know how the state of California is going to revise the science advice LeValley provided for the North Coast MLPA Initiative process, based on him filing false documents,” said Jim Martin, West Coast Regional Director of the Recreational Fishing Alliance (RFA).

He suggested forming a “truth and reconciliation commission” to unravel "what really happened" in the MLPA Initiative.

MLPA Initiative science is 'incomplete and terminally flawed,' according to Tribes

The validity of the science employed by the MLPA Initiative Science Advisory Team under LeValley’s leadership becomes even more suspect when one considers that LeValley and the Team repeatedly and inexplicably refused to allow the Yurok Tribe to present their scientific studies regarding "marine protected areas."

The Tribe exposed the questionable science of the MLPA Initiative in a statement on June 6, 2012 that questioned the "protection" provided in the so-called "marine protected areas, showing how two species, Pacific eulachon and mussels would be "summarily mismanaged." (http://www.indybay.org/newsitems/2012/06/17/18715613.php)

"To date, there has been no scientific data submitted suggesting that mussels on the North Coast are in any sort of danger or are overharvested. In fact, it's just the opposite. The readily available quantitative survey data collected over decades by North Coast experts shows there is quite an abundance of mussels in this sparsely populated study region," the Tribe continued.

"Fish like Pacific eulachon, also known as candle fish, are given a high level of protection, or in other words, their harvest is not limited by the proposed regulations. Eulachon are near extinction and listed as threatened under the federal Endangered Species Act," the Tribe stated.

"Both of these marine species are essential and critical to the cultural survival of northern California tribes," said Thomas O'Rourke, Chairman of the Yurok Tribe. "However, under the proposed regulations they would be summarily mismanaged. It's examples like these that compel our concerns."

The Tribe said it attempted on numerous occasions to address the scientific inadequacies with the MLPA science developed under the Schwarzenegger administration by adding "more robust protocols" into the equation, but was denied every time.

For example, the MLPA Science Advisory Team Co-Chaired by LeValley in August 2010 turned down a request by the Tribe to make a presentation to the panel. Among other data, the Tribe was going to present data of test results from other marine reserves regarding mussels

The Northern California Tribal Chairman's Association, including the Chairs of the Elk Valley Rancheria, Hoopa Valley Tribe, Karuk Tribe, Smith River Rancheria, Trinidad Rancheria, and Yurok Tribe, documented in a letter how the science behind the MLPA Initiative developed by Schwarzenegger's Science Advisory Team is "incomplete and terminally flawed." (http://yubanet.com/california/Dan-Bacher-MLPA-Initiative-based-on-incomplete-and-terminally-flawed-science.php)

On the day of the historic direct action protest by a coalition of over 50 Tribes and their allies in Fort Bragg in July 2010, Frankie Joe Myers, Yurok Tribal member and Coastal Justice Coalition activist, exposed the refusal to incorporate Tribal science that underlies the "science" of the MLPA process.

Wouldn't it have been prudent for the Natural Resources Agency and Department of Fish and Wildlife to have postponed the implementation of the alleged North Coast "marine protected areas” until this case had been resolved in the courts - and when the legitimacy of the "science" of the MLPA Initiative was already facing severe criticism from respected Tribal scientists?

The MLPA Initiative operated through a controversial private/public partnership funded by the shadowy Resources Legacy Fund Foundation. The Schwarzenegger administration, under intense criticism by grassroots environmentalists, fishermen and Tribal members, authorized the implementation of marine protected areas under the initiative through a Memorandum of Understanding (MOU) between the foundation and the California Department of Fish and Wildlife.