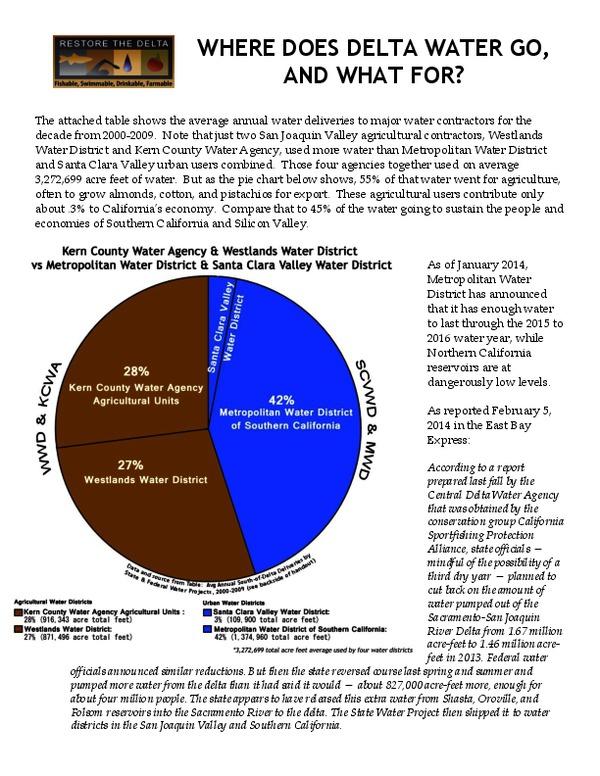 Tunnel opponents Call on Gov. Brown not to force families to subsidize billionaires

As California continues to suffer from drought in spite of the weekend storm, Restore the Delta (RTD) today released a water export pie chart and tracking table showing where the water goes that is exported from the San Francisco Bay-Delta.

The Westlands Water District and the Kern County Water agency have taken more water from the Delta on an annual average basis than the Metropolitan Water District and the Santa Clara Valley Water District combined, even though tens of millions of people use water in these urban water districts. Of these four water district proponents of the Bay Delta Conservation Plan to build the peripheral tunnels, the urban users get 45% of the water they share, while huge agribusiness in the Westlands and Kern County get 55% of water exports.

Barbara Barrigan-Parrilla, RTD Executive Director, told the news teleconference, “The unsustainable business practices of Westlands and Kern, planting permanent crops, like almonds, in areas that are only to receive extra water in wet years, are the problem behind the emergency that this drought has evolved into.”

"But as the pie chart shows, 55% of that water went for agriculture, often to grow almonds, cotton, and pistachios for export," Barrigan-Parrilla revealed. "These agricultural users contribute only about .3% to California’s economy. Compare that to 45% of the water going to sustain the people and economies of Southern California and Silicon Valley."

Urban water rate payers in the Santa Clara Valley Water District and the Metropolitan Water District are being asked to pay for a significant portion of the proposed peripheral tunnels, as part of the Bay Delta Conservation Plan, without receiving any additional water.

“Yet, these urban agencies receive a smaller percentage of Delta exports than the big agribusiness growers found in the Westland Water District and the Kern County Water Agency. It’s time to stop forcing the rest of us to subsidize unsustainable agriculture," she continued.

Bill Jennings, executive director of the California Sportfishing Protection Alliance (CSPA), said, “Politically powerful special interests have created an artificial reality constructed of ‘paper water.’ Tragically, people have mortgaged their futures based on these promises, and are now suffering the consequences."

Jennings said the present political controversy, and HR 3964 legislation from South Valley interests, should be viewed as one area in California seeking to profit itself at the expense of another.

"We should be extremely careful about sacrificing the fisheries, farms, communities and future prosperity of northern California in order to enrich a south valley industrial agriculture, that comprises 3 tenths of 1% of our state economy, and is predicated upon embezzled water, massive public subsidies, unrestricted pollution and subsistence wages," Jennings concluded.

You can listen to the audio from the media teleconference by going to: http://www.restorethedelta.org/wp-content/uploads/2014/02/Conf_recorded_on_Feb_10_2014_11-47AM.mp3

For the Central Valley Business Times coverage of the conference, go to: http://www.centralvalleybusinesstimes.com/stories/001/?ID=25188

The pie chart and tables can be viewed at http://www.restorethedelta.org.

Restore the Delta is a 15,000-member grassroots organization committed to making the Sacramento-San Joaquin Delta fishable, swimmable, drinkable, and farmable to benefit all of California. Restore the Delta works to improve water quality so that fisheries and farming can thrive together again in the Sacramento-San Joaquin Delta.http://www.restorethedelta.org

For more information, contact: Steve Hopcraft 916/457-5546; steve [at] hopcraft.com; Twitter: @shopcraft; @MrSandHillCrane; Barbara Barrigan-Parrilla 209/479-2053 barbara [at] restorethedelta.org; Twitter: @RestoretheDelta
Add Your Comments
Support Independent Media
We are 100% volunteer and depend on your participation to sustain our efforts!