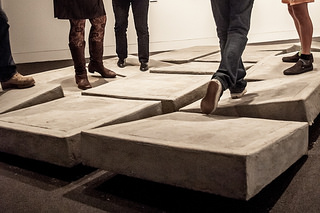 Hidden Cities, curated by Pireeni Sundaralingam and featuring 26 moving and still images and interactive, site-specific installations that rethink urban space in San Francisco. In Hidden Cities, the second of three SOMArts Commons Curatorial Residency exhibitions in 2014, exhibiting urban activist-artists, including architects and social interventionists, reveal the overlooked within the city, make visible the invisible, give voice to the unheard and encourage the gallery visitor to physically explore urban social and spatial structures in new ways.

The opening showcases a range of performative practices that engage both the artist and gallery visitor in co-production. Several of the artists will give 3-minute introductions to their pieces. A parkour team demonstrates new ways to investigate San Francisco’s architecture by interacting with its physical spaces. Urban-activist groups, including Lemonopoly and Kearny Street Workshop, will move about the gallery during the reception and provide roving, interactive explorations of their perspectives on hidden aspects of the city.

“The Sludge Economy”, a large-scale map of San Francisco by Lize Mogel, straddles the fields of art and cultural geography, reveals the infrastructure of human waste, specifically sewage treatment plants, and the social, environmental, and racial justice issues that are sometimes equally as invisible as the physical infrastructure. A chocolate cake designed by Mogel and printed with locations of sewage plants as a visual aid and dessert will be served at the opening reception.

END_OF_DOCUMENT_TOKEN_TO_BE_REPLACED
Added to the calendar on Wed, Feb 5, 2014 4:12PM
Add Your Comments
Support Independent Media
We are 100% volunteer and depend on your participation to sustain our efforts!