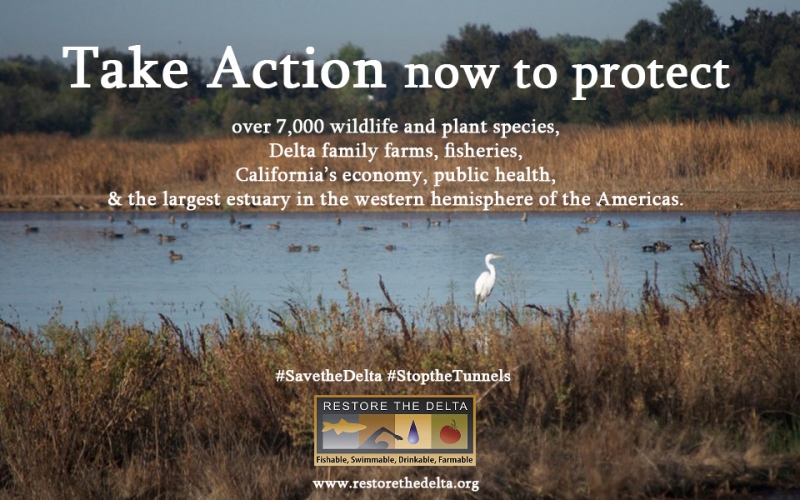 The legislation, a virtual wish list for heavily subsidized corporate agribusiness interests on the west side of the San Joaquin Valley, threatens to drive already imperiled Central Valley salmon and Delta fish populations over the abyss of extinction. The reduction in Delta water quality that would result from the bill's passage also threatens to put Delta farmers out of business.

"This bill by Representative David Valadao of Hanford is being described as an “Emergency Water Delivery Act,” ignoring the fact that there is no water to deliver and that they over pumped the Delta last year by 800,000 acre feet, when they should have been holding water for an extended dry period," the alert states.

Like similar legislation (HR1837) that died in the Senate two years ago, HR3964 would reduce water quality and water reliability for Delta communities and Delta farmers.

“It seeks to ensure water flows to agribusiness in the western and southern San Joaquin Valley at the expense of smaller Delta family farmers," said Bill Jennings of the California Sportfishing Protection Alliance, an expert on Delta water quality issues.

If passed, this law also would:

• Strip Endangered Species protections for iconic Central Valley Chinook salmon and other endangered species that are required under both California state law and federal law.

• Gut the Central Valley Project Improvement Act (CVPIA), a landmark law that made fish and wildlife a purpose of the federal project for the first time in history. It requires compliance with state law, encourages water conservation, makes modest reforms to reduce water subsidies, and contributes water for the recovery of endangered fish species.

• Override current protection for the Merced River under the federal Wild and Scenic Rivers Act and modify water contracts for certain contractors to provide significantly more water than they are entitled to under their current contracts.

HOW TO TAKE ACTION
Tell your representatives to resist this effort to use California’s drought to justify a water grab taking water from one region of the state to benefit unsustainable corporate agribusiness practices in another region.

In addition to contacting your representatives, the group encourages you to use social media to also send a message to your house representatives to oppose HR 3964, with hashtags #savethedelta #stopthetunnels, or #HR3964.

Meanwhile, go to http://www.restorethedelta.org to sign up for action alerts against Governor Jerry Brown's Bay Delta Conservation Plan to build the twin tunnels.